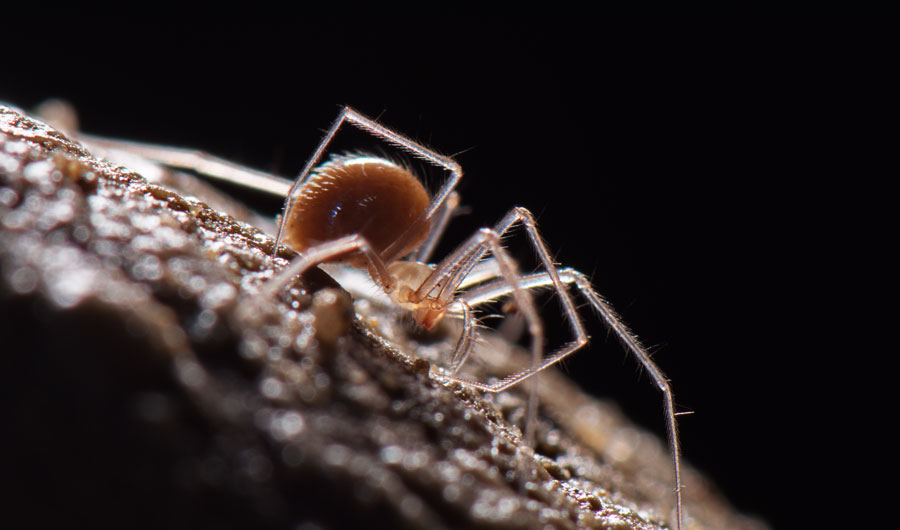 A Troglohyphantes pedemontanus, a blind cave spider that lives in the Italian Alps.

(Inside Science) -- Sometimes, bugs can be the best environmental sentinels. Insects or spiders living in extreme environments or those in the gentle tropics can alert us to the smallest changes in the climate.

For Isaia Marco, a teaching fellow at the University of Turin in Italy, the alarm system is a cave spider, of the genus Troglohyphantes in the western Alps, tiny creatures that live deep in pitch-dark caves, as far away from sunlight as they can get. They never go outside.

Because they never encounter solar radiation, they have no pigmentation; because it is totally dark where they live, they have no eyes, Marco said. They are smaller, grow slower and have far fewer eggs than spiders in the outside world. They live on the edge of starvation, eating tiny prey -- such as small beetles and dipterans -- that happen to float back into the cave, a world dark, wet and lonely.

The stability of their environment is crucial. Caves have a unique attribute: If you go far enough from the opening you reach a zone where the temperature rarely changes, reflecting the mean annual temperature outside the cave.

The further from the entrance the more stable the temperature, Marco said, so the spiders live as far back as they can to take advantage of the stability. “They are fine tuned to live in those conditions,” he said.

Any change in temperature and they are in trouble.

The temperature inside the cave does reflect what is happening outside, but with a lag of perhaps 20 years. If the climate outside is warming, eventually temperatures in the cave will rise and the spiders may not be able to cope, he said.

Over a two-year period, Marco studied almost 400 caves in the Western Alps known to have the spiders -- mostly from the outside using tiny microphones to listen to them scurry about, he said. Some caves are very small; some have nothing else of interest to study so it is just more efficient to stay out of them.

“I am not a serious spelunker,” he said.

The researchers started with 40 caves and eventually expanded to 400. The spiders apparently have been in the caves since the Pleistocene, from about 2.6 million to 12,000 years ago, and their distribution show specific responses to changes in the local temperature. Temperatures were collected over a year.

They then modeled what would happen if the temperature outside increased. The model asserts the spiders are threatened with extinction. His research appears in the journal Ecography.

“If the temperatures increases three or four degrees in less than 20 or 30 years, we will find the signal of increased temperature inside the cave,” he said. “We are going to have some problem with their survival. There will be a strong probability these spiders will be extinct locally.”

Other cave organisms such as fish would have the same problem.

For some insects, climate change is a golden opportunity. Mauro Gobbi, of the Science Museum of Trento, Italy, studies ground beetles in what he calls glacier forelands. When the ice recedes, the ground at the edge is virtually sterile, yet the beetles managed to adapt and survive. Other beetles that live on the surface of glaciers learn to become predators, eating whatever falls from the wind.

For many species, survival depends on their ability to disperse. Some are able to adapt very quickly, Gobbi said. But a lot of species are not able to fly away or are overcome by the stress of having to move.

Small animals such as spiders and insects ought to be ideal for studying climate change but most are not, said Derek Sikes, curator of insects at the Museum of the North at the University of Alaska Fairbanks. Insects have very short life spans -- usually no more than a year -- which makes them easy to trace through generations. The bad news is that for many small invertebrates, there are scarce historical data. “Not a great deal is known.” he said.

Sikes has studied bumblebees and butterflies. He said insects in other climes also are vulnerable to changes, including the ones in usually stable conditions such as the tropics, where a temperature change also would endanger species.

Not all, however. In Alaska, beetles moving up from the south now endanger timber in the north, and there has been an increase in ticks and a dramatic increase in yellow jacket stings, a painful reminder that our climate is changing.