A physicist presents a solution to present-day cosmic mysteries.
Image 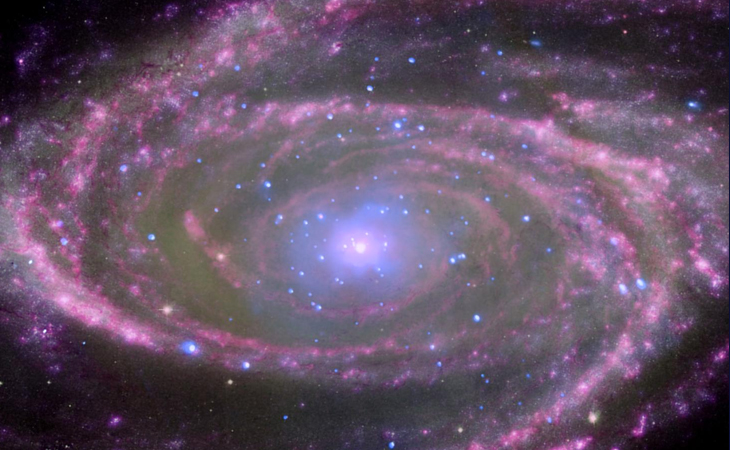 At the center of spiral galaxy M81 is a supermassive black hole about 70 million times more massive than our sun.

(ISM) -- Our universe may exist inside a black hole. This may sound strange, but it could actually be the best explanation of how the universe began, and what we observe today. It's a theory that has been explored over the past few decades by a small group of physicists including myself.

Successful as it is, there are notable unsolved questions with the standard big bang theory, which suggests that the universe began as a seemingly impossible "singularity," an infinitely small point containing an infinitely high concentration of matter, expanding in size to what we observe today. The theory of inflation, a super-fast expansion of space proposed in recent decades, fills in many important details, such as why slight lumps in the concentration of matter in the early universe coalesced into large celestial bodies such as galaxies and clusters of galaxies.

But these theories leave major questions unresolved. For example: What started the big bang? What caused inflation to end? What is the source of the mysterious dark energy that is apparently causing the universe to speed up its expansion?

The idea that our universe is entirely contained within a black hole provides answers to these problems and many more. It eliminates the notion of physically impossible singularities in our universe. And it draws upon two central theories in physics.

The first is general relativity, the modern theory of gravity. It describes the universe at the largest scales. Any event in the universe occurs as a point in space and time, or spacetime. A massive object such as the Sun distorts or "curves" spacetime, like a bowling ball sitting on a canvas. The Sun's gravitational dent alters the motion of Earth and the other planets orbiting it. The sun's pull of the planets appears to us as the force of gravity. The second is quantum mechanics, which describes the universe at the smallest scales, such as the level of the atom. However, quantum mechanics and general relativity are currently separate theories; physicists have been striving to combine the two successfully into a single theory of "quantum gravity" to adequately describe important phenomena, including the behavior of subatomic particles in black holes.

A 1960s adaptation of general relativity, called the Einstein-Cartan-Sciama-Kibble theory of gravity, takes into account effects from quantum mechanics. It not only provides a step towards quantum gravity but also leads to an alternative picture of the universe. This variation of general relativity incorporates an important quantum property known as spin. Particles such as atoms and electrons possess spin, or the internal angular momentum that is analogous to a skater spinning on ice.

Spacetime torsion would only be significant, let alone noticeable, in the early universe or in black holes. In these extreme environments, spacetime torsion would manifest itself as a repulsive force that counters the attractive gravitational force coming from spacetime curvature. As in the standard version of general relativity, very massive stars end up collapsing into black holes: regions of space from which nothing, not even light, can escape.

Here is how torsion would play out in the beginning moments of our universe. Initially, the gravitational attraction from curved space would overcome torsion's repulsive forces, serving to collapse matter into smaller regions of space. But eventually torsion would become very strong and prevent matter from compressing into a point of infinite density; matter would reach a state of extremely large but finite density. As energy can be converted into mass, the immensely high gravitational energy in this extremely dense state would cause an intense production of particles, greatly increasing the mass inside the black hole.

The increasing numbers of particles with spin would result in higher levels of spacetime torsion. The repulsive torsion would stop the collapse and would create a "big bounce" like a compressed beach ball that snaps outward. The rapid recoil after such a big bounce could be what has led to our expanding universe. The result of this recoil matches observations of the universe's shape, geometry, and distribution of mass.

The motion of matter through the black hole's boundary, called an "event horizon," would only happen in one direction, providing a direction of time that we perceive as moving forward. The arrow of time in our universe would therefore be inherited, through torsion, from the parent universe.

Finally, torsion could be the source of "dark energy," a mysterious form of energy that permeates all of space and increases the rate of expansion of the universe. Geometry with torsion naturally produces a "cosmological constant," a sort of added-on outward force which is the simplest way to explain dark energy. Thus, the observed accelerating expansion of the universe may end up being the strongest evidence for torsion. 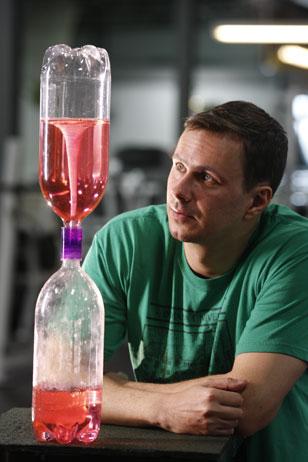 Nikodem Poplawski displays a "tornado in a tube". The top bottle symbolizes a black hole, the connected necks represent a wormhole and the lower bottle symbolizes the growing universe on the just-formed other side of the wormhole.

Torsion therefore provides a theoretical foundation for a scenario in which the interior of every black hole becomes a new universe. It also appears as a remedy to several major problems of current theory of gravity and cosmology. Physicists still need to combine the Einstein-Cartan-Sciama-Kibble theory fully with quantum mechanics into a quantum theory of gravity. While resolving some major questions, it raises new ones of its own. For example, what do we know about the parent universe and the black hole inside which our own universe resides? How many layers of parent universes would we have? How can we test that our universe lives in a black hole?

The last question can potentially be investigated: since all stars and thus black holes rotate, our universe would have inherited the parent black hole’s axis of rotation as a "preferred direction." There is some recently reported evidence from surveys of over 15,000 galaxies that in one hemisphere of the universe more spiral galaxies are "left-handed", or rotating clockwise, while in the other hemisphere more are "right-handed", or rotating counterclockwise. In any case, I believe that including torsion in geometry of spacetime is a right step towards a successful theory of cosmology.

Nikodem Poplawski is a theoretical physicist at the University of New Haven in Connecticut.