People infected with Toxoplasma gondii are more likely to be entrepreneurs, according to new research.
Image 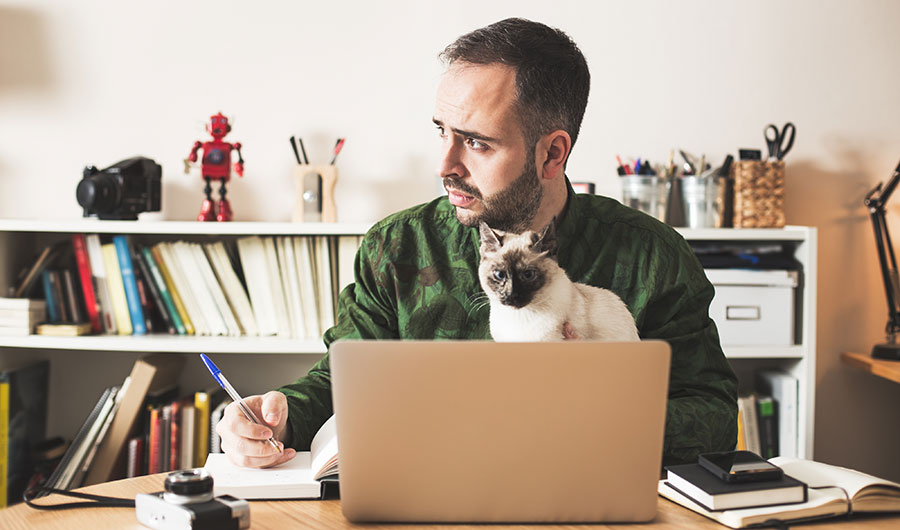 (Inside Science) -- A parasite that infects some 30 to 50 percent of the world's human population may subtly prompt people to start businesses, according to a new study. The association with entrepreneurship may be a side effect of the parasite's real goal: getting its host, typically a mouse or rat, eaten by a cat.

Toxoplasma gondii is a protozoan parasite that can live in many kinds of animals, although it can only reproduce sexually in the gut of a domestic or wild cat. In the typical scenario, cats excrete an egg-like form of the parasite in their feces, and mice or rats become infected from contact with contaminated soil. The parasites then reproduce asexually in the rodent's body, eventually entering an inactive lifecycle stage in which they are known as bradyzoites -- dormant cells encapsulated in cysts in the brain and other tissues.

The cysts manipulate rodents' behavior for their own ends. While normal rodents avoid cats, infected mice and rats lose their fear of the predators, and some actually become attracted to feline odors.

Humans can get infected either through contact with cat feces or by eating under-cooked, cyst-ridden meat. The disease is dangerous to people with AIDS, and if women become infected while pregnant, it can harm their fetuses. But in most cases, the only obvious effect is a brief flu-like illness. People assume they have gotten better, unaware that parasites still lurk in their bodies.

"You might call them quiescent. But they're definitely alive," said Kevin Lafferty, a parasite ecologist with the U.S. Geological Survey at the University of California, Santa Barbara, who was not involved in the study. "[The cysts] might be in your brain by the millions, and they are full of little bradyzoites."

More stories from Inside Science about parasites and their hosts:

No Bird Is An Island, Unless You're A Louse

Since humans are a dead end for the parasites (except possibly in rare cases involving man-eating lions), the parasites probably haven’t evolved to manipulate human behavior specifically. However, human brains bear many similarities to mouse brains, so the same mechanisms that evolved to lead mice into a cat's jaws may also have some accidental effect on humans.

Indeed, evidence has been mounting that quiescent or "latent" infections may affect people's minds. Studies have found that infected people are more likely to get into traffic accidents, to develop schizophrenia, to abuse alcohol, to commit suicide, and to make various kinds of risky decisions. Infection has also been linked to certain personality traits, including aggression in women and a disregard for rules in men.

The findings aren't always consistent, so some researchers are keeping an open mind. For example, when Karen Sugden, a biologist at Duke University in Durham, North Carolina, and her colleagues examined personality and neuropsychiatric traits in 837 subjects, they found virtually no difference between infected and non-infected people.

"It could be that we just didn't find it in that study, or it could be that things have been over-hyped," said Sugden. "I'll let the evidence speak for itself as time goes on."

And even if infected people really do differ from non-infected people, existing studies can't prove that those differences are caused by Toxoplasma. It's possible that both the infections themselves and the behaviors measured in the studies are driven by some third factor, such as pre-existing personality traits that make people more likely to encounter cat feces.

But controlled experiments in rats and mice clearly show that Toxoplasma changes rodents' behavior by altering chemical messengers and DNA expression in their brains. The rodent evidence adds weight to the idea that the parasite might change human behavior as well, said Lafferty.

In the new study, the researchers reasoned that if Toxoplasma makes people more risk-prone, those tendencies might extend to decisions about whether to start a company. New businesses require huge investments of time and money, and most fail without ever paying off.

"Lots of people have business ideas…but don't follow through with actually starting a business because of that fear of failing," said Stefanie Johnson, a psychologist and business professor at the University of Colorado Boulder and first author of the study. "What I really expect is going on is that [Toxoplasma] is just reducing that natural fear."

To test this idea, the research team -- which included Johnson's husband, Pieter Johnson, a disease ecologist also at the University of Colorado Boulder -- first sampled saliva from nearly 1,500 college students and tested it for Toxoplasma antibodies. Since Toxoplasma is thought to remain in people's bodies indefinitely, people who appear healthy and have antibodies to the parasite are assumed to have latent infections.

Next, the researchers sampled saliva from 197 people attending entrepreneurship events such as social meetups and university lectures. All of these people had shown interest in entrepreneurship just by showing up at the events, but the infected ones were 1.8 times more likely to have actually taken the plunge and started their own company.

Finally, the researchers used previously collected data to compare Toxoplasma infection and entrepreneurship in 42 different countries. Infection rates vary widely around the world, from around 9 percent in Norway to around 60 percent in Brazil. The researchers found that in countries with high infection rates, people were more likely to report that they ran their own business or planned to start one, and less likely to report that they held back out of fear of failure.

"The relationship between Toxoplasma prevalence and entrepreneurial presence at the country level is really profound, because we're saying that the existence of a parasite -- a microorganism -- can affect a country's economic foundation," wrote Johnson in an email to Inside Science. The study was published today in the journal Proceedings of the Royal Society B.

The findings came as no surprise to Jaroslav Flegr, an evolutionary biologist and parasitologist at Charles University in Prague who has studied Toxoplasma extensively but was not involved in the new study. Some of the behaviors shown by infected people may actually be related to the parasite harming people's health, as latent infection has been associated with increased risk of various ailments such as cancer and heart disease, Flegr noted. But, he said, other differences may be the direct result of parasitic cysts in people's brains.

"I think that this parasite is extremely important, and it can influence many aspects of our life," said Flegr. People resist this idea, he said, because "it's difficult to accept that your behavior and your mind are strongly influenced by some stupid parasite."