The Changing Face of American Forests 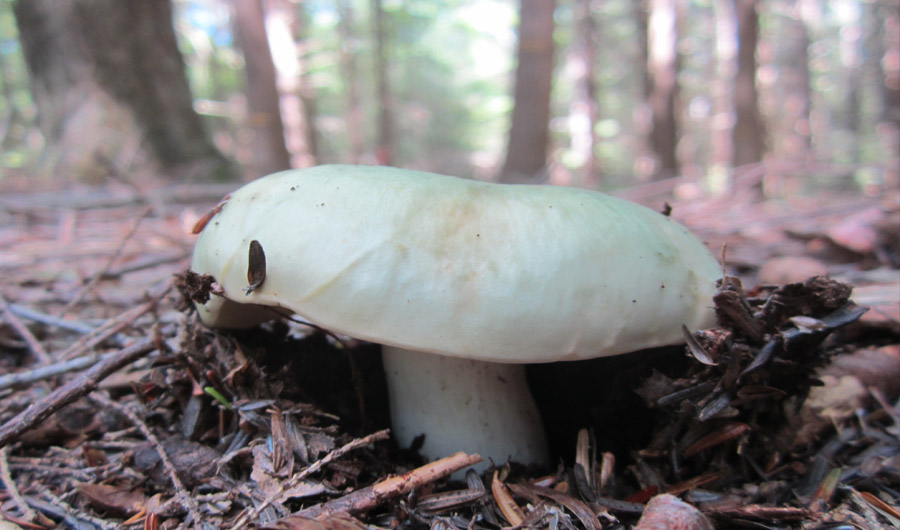 (Inside Science) -- Fossil fuel emissions are transforming forests from the bottom up by releasing massive amounts of nitrogen into soil. This may be allowing certain tree species to outcompete others, resulting in a vast shift in the composition of American forests, according to new research presented earlier this month at a scientific meeting in California. These emissions may also be worsening climate change by accelerating carbon dioxide release from the soil.

The changes hinge on the actions of fungi on the forest floor -- specifically mycorrhizae, a group of fungi that form relationships with plant roots and help them obtain nutrients. Mycorrhizae are a crucial part of the forest microbiome, and, much like the microbiome of the human gut, they are integral to the health of the whole system.

"Through pollution, we've actually manipulated the forest microbiome, which has changed which species are present in the forest at this really grand scale," said Colin Averill, an ecosystem ecologist at Boston University, who presented the research on December 14 at the American Geophysical Union meeting in San Francisco.

The key ingredient in these processes is nitrogen, a central building block of life which all plants need to grow. Bacteria and fungi in the soil decompose dead plants and other organic detritus and break down the nitrogen contained therein, transforming it into an inorganic form trees can readily use.

Some trees, such as red maples and many species of cedar, collect this inorganic nitrogen with the help of a group of fungi called "arbuscular mycorrhizae." But arbuscular mycorrhizae can only gather nitrogen that's already broken down, and such usable nitrogen is often scarce. Some trees overcome this scarcity by partnering with a different group of fungi that have an extra power: the ability to break down dead organisms. These fungi, called "ectomycorrhizae," act as decomposers, transforming nitrogen for themselves and their trees. Ectomycorrhizae form sheaths around tree roots, and many of them reproduce using the familiar structures we know as mushrooms.

Nearly all trees partner with either the arbuscular or the ecto type of mycorrhizae, and hardly any tree species use both, Averill said. In soils low in inorganic nitrogen, the ectomycorrhizal-partnered trees -- including most species of pine, oak, beech, and hemlock -- have an advantage because their fungal partners can break down organic nitrogen. But fossil fuel emissions may be stripping ectomycorrhizal teams of this advantage by providing nitrogen that is already broken down, free for arbuscular mycorrhizae to collect. In highly polluted soils, arbuscular teams may have the advantage.

Many researchers have begun to suspect that this pollution causes arbuscular plant-fungus teams to outcompete ectomycorrhizal teams. Past studies have supported this idea, using experiments in which researchers add nitrogen to patches of soil and then monitor the reactions of plants and fungi. But such experiments are limited. They can't show how real-world pollution alters the landscape at large, and they don't last for decades -- the time scale needed to observe how trees grow and replace each other, Averill said.

Instead of focusing on an experimental plot, Averill and his colleagues looked for patterns across the entire continental United States. They used census data from the U.S. Forest Service, which monitors trees and soil at more than 125,000 field sites, and the National Atmospheric Deposition Program, which tracks how much nitrogen is deposited by air currents and precipitation across the country.

The results were dramatic. At unpolluted sites, mostly located in the West, pines and other ectomycorrhizal-partnered species made up about 80 to 90 percent of all trees. But at the most polluted sites, which were concentrated in the Midwest, these species made up just 10 to 20 percent, Averill said. The analysis used a statistical model that let the researchers control for other factors such as temperature and soil acidity. 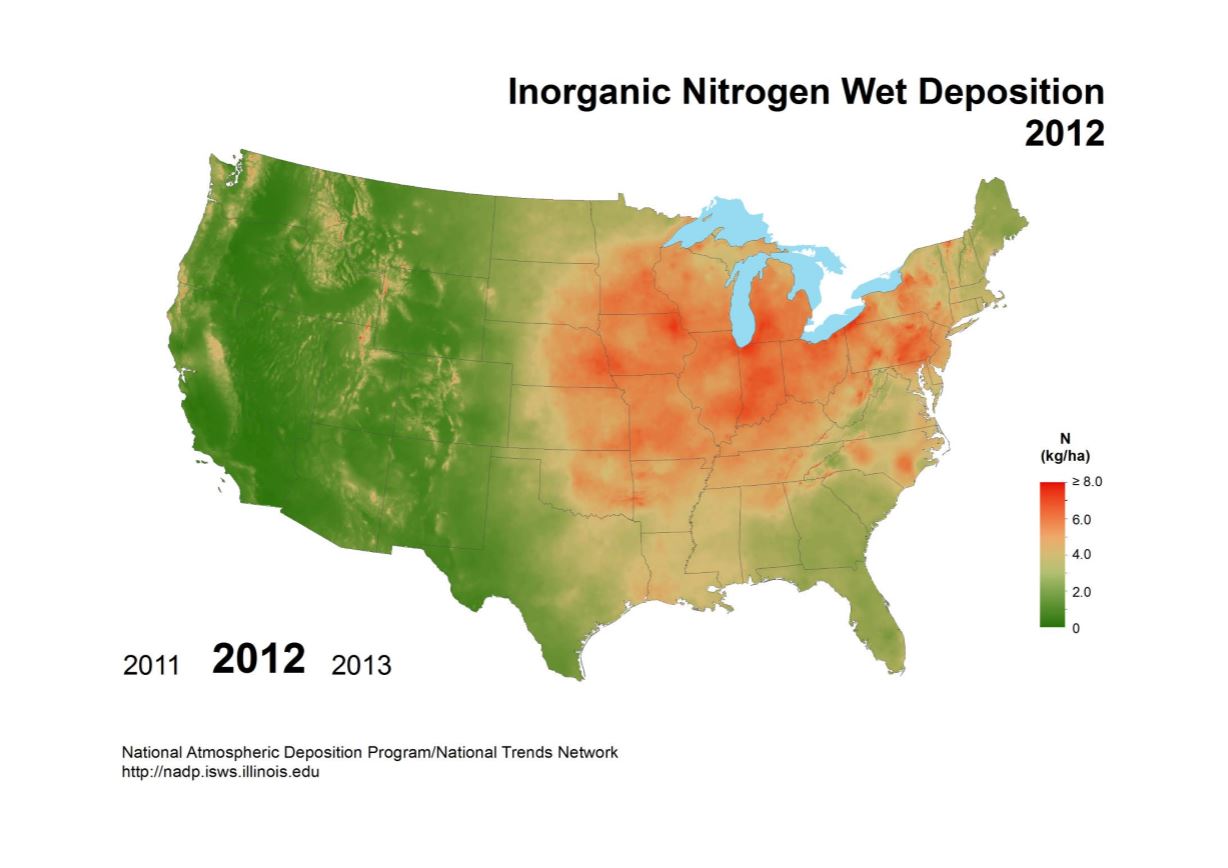 This map illustrates how much nitrogen pollution soils receive across the Unites States through rain and snow.

Benjamin Sulman, a quantitative ecologist at Princeton University in New Jersey, finds it intriguing that nitrogen deposition could be affecting such broad distributions of species.

"It's really interesting to look at just what the legacy of human activity is," he said.

Sulman attended Averill's talk at the American Geophysical Union meeting, and he was not involved in the project.

Nitrogen pollution has actually been declining in the United States over the past few decades, largely because we are using less coal, Averill said. Currently, the most polluted U.S. forests receive around 10 kg of nitrogen per hectare per year, still about ten times more than unpolluted sites, which receive less than 1 kg naturally every year. But elsewhere in the world, nitrogen deposition in the soil is skyrocketing. Fossil fuel emissions dump some 50 to 100 kg of nitrogen per hectare per year in parts of Asia and Europe, with unknown consequences for the regions' trees.

In a separate part of the study, Averill found evidence that nitrogen pollution could be speeding up carbon dioxide release from the soil -- a surprising finding, since most earlier studies have suggested the opposite. Instead of looking at tree species, this part of the study looked at the amount of carbon in soil samples. Soil carbon is largely controlled by the bacteria and fungi that decompose dead things, transforming organic carbon into carbon dioxide. These organisms need nitrogen, and they don't always have enough of it. Adding more nitrogen could help bacteria and fungi decompose things more quickly, resulting in more carbon release from the soil.

Averill found that soil samples from highly polluted sites contained about 30 percent less carbon than soil from unpolluted sites. He suspects that the missing carbon goes into the atmosphere. Pollution accelerates decomposition, he said, which transforms the carbon from organic matter into carbon dioxide that escapes into the air.

"Basically, this is an undocumented carbon emission in the United States," Averill said.

It's too soon to conclude that nitrogen makes soils release more carbon dioxide, said Richard Phillips, an ecosystem ecologist at Indiana University in Bloomington, who attended Averill's talk and was not involved in the project. Researchers have a good understanding of what makes plants grow, but they are still working out the processes that control soil carbon. And of course, Phillips said, the study has not yet been published in a peer-reviewed journal, so the findings should be approached with caution.

Still, he said, the patterns are striking, especially when it comes to tree species. The composition of forests has profound implications, not only for forest ecosystems, but for the future of the climate. Healthy trees absorb more carbon from the atmosphere, and as the climate changes, some species will do better at surviving under new conditions. The links between trees, mycorrhizae, and nitrogen pollution could help researchers incorporate trees into climate models.

"The trees are this sort of lever that can determine the magnitude of climate change," Phillips said. "If it turns out that these mechanisms are at play, it gives us a really important tool for making predictions about how different tree species are going to respond to global environmental changes."