Harmful algal blooms could be linked in unexpected ways to water mixing and nutrient levels.
Image 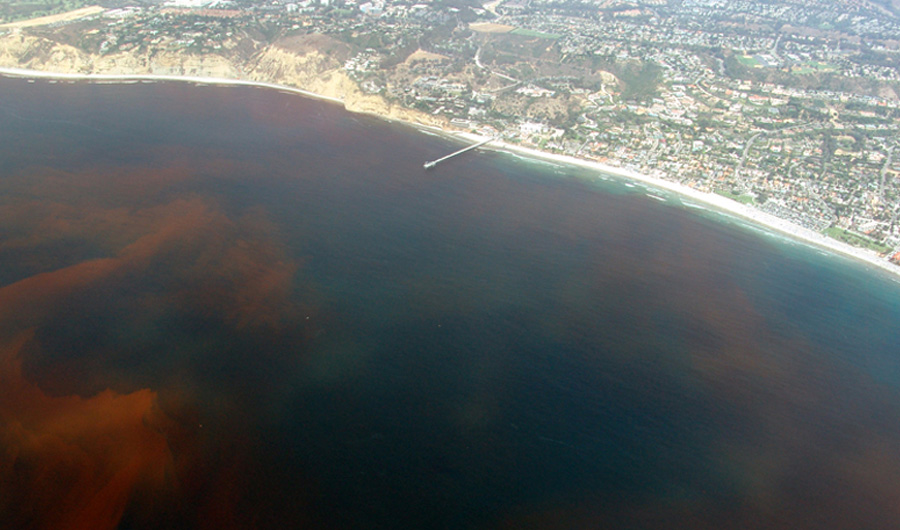 Red tide off the Scripps Institution of Oceanography pier

(Inside Science) -- It’s a mystery from the deep: Seemingly without warning, explosions of reddish-brown algae take over coastal waters, choking water pipes and poisoning fish, and sometimes people. Now a crack may have opened in this longstanding oceanic conundrum. Combining a unique 27-year data set with mathematical techniques based on chaos theory, scientists have puzzled out key factors behind toxic algal blooms that ravage California’s southern coast -- and have proposed a way to predict these “red tides” much further in advance.

Advance warning of such impacts would be “incredibly valuable,” said Richard Stumpf, an oceanographer at the National Oceanographic and Atmospheric Administration in Silver Spring, Maryland.

Biologists have studied harmful algal blooms for decades, but have yet to produce a reliable forecast for more than a day or two out. “This conspicuous, mysterious … phenomenon takes place in front of one of the world’s premier oceanographic institutions, but we have had a fairly meager understanding of how these things occur,” said George Sugihara, an ecologist at the Scripps Institution of Oceanography in San Diego, referring to how these blooms often occur in the coastal waters in front of where he works.

Scientists have typically sought simple correlations between algae levels and environmental variables such as ocean temperature or nutrients. But such correlations, Sugihara said, usually turn out to be “mirages” that disappear upon closer inspection. For instance, his colleague John McGowan at the University of California, San Diego was once close to concluding that Southern California “red tides” were correlated with how temperature changed within the water column. Then McGowan collected more data, and the apparent relationship vanished. “If you look at various factors that you think should be important,” said Sugihara, “there are no correlations with red tides.”

Just as correlation does not imply causation, however, lack of correlation does not mean lack of causation. To ferret out hidden causal links between variables, Sugihara turned to chaos theory. Chaos aims to describe complex systems such as the weather and the stock market, which are affected by multiple interacting variables at the same time. Since natural ecosystems are similarly complex and interacting, Sugihara decided to attack Southern California’s red tides using a chaos theory-based method he had previously used to predict salmon runs in the Pacific Northwest. To do the algae study, he and his students made a graph using data on chlorophyll levels -- a measure of algae populations -- and environmental variables such as sea surface temperature that McGowan had collected between 1983 to 2010 from the water near the Scripps pier.

McGowan could not monitor all possible factors that could influence algae. To get around this limitation, the researchers used the mathematical idea, proven in the early 1980s, that information about the unmeasured influencers is in fact embedded in the history of the algae populations themselves. To apply this principle, the scientists plotted chlorophyll levels at a given time on one axis of their graph, and levels at previous times on other axes. Doing this for weekly or twice-weekly measurements taken over 27 years created a complicated line that twisted through space like a tangle of yarn. But patterns emerged: When the system was in a state that resembled a past state, it was likely to evolve similarly to how it did in the past, over the short term.

The researchers then added variables related to different measurements such as ocean temperature or nutrient levels, and tested whether chlorophyll levels became more predictable. If they did, the scientists concluded that the variables had a causal influence on red tides. Using this method, they concluded that the main factors causing Southern California’s red tides were related to two properties: how much different water levels mix with each other and surface nutrient levels.

But the relationships were not necessarily straightforward: Red tides paradoxically tended to occur after a period of low nutrients. Sugihara suspects this is because dinoflagellates -- single-celled organisms responsible for Southern California’s red tides -- can swim down to where nutrients are, allowing them to outcompete nonswimming diatoms and balloon their numbers.

Finally, the researchers tested whether their model would have correctly predicted red tides that occurred in 2011 and 2012. “All 80 of our fingers were crossed when we did this final test,” Sugihara wrote in an email. They turned up warning signs of the blooms one week before they occurred -- days sooner than any other method could have.

Their paper is accepted at the journal Ecology.

“The results are very compelling,” and show why previous analyses failed to predict Southern California’s red tides, Raphael Kudela, an ocean scientist at the University of California, Santa Cruz, wrote in an email. He noted, however, that Sugihara’s team relied on an exceptionally long and thorough data series, and the fact that populations of Southern California’s harmful algae can be estimated using chlorophyll levels. This could make it hard to apply the findings to other kinds of algal blooms, he suspects.

Sugihara’s team’s methods look solid, agreed NOAA’s Stumpf. He hopes they can help predict red tides in the Gulf of Mexico, which can currently be forecast only a day or two out. Longer forecasts could, for example, help fishers plan when to go out to sea, and avoid having to recall contaminated harvests. “Every day of warning means that somebody can plan appropriately to reduce what the impact is,” Stumpf said.

But, he added, Sugihara’s team must first put their method to the ultimate test, and predict a red tide ahead of time. “That’s the key next step.”