This past summer, thousands of scientists worked together in the first observation of a neutron star merger. Here’s how it went down.
Image

(Inside Science) -- Aug. 17, 2017. It started as an ordinary morning in southern Louisiana. The air was hot and humid as the sun rose above the Mississippi River. Brian O'Reilly, one of the lead scientists at the Livingston location of the gravitational wave detection facility known as LIGO, was just beginning his day. It was barely 8 o'clock when his phone rang.

"I have twin babies -- they're a year and a half -- and I was actually changing my daughter at the time," said O'Reilly. "That's when my phone started beeping in my pocket."

Minutes later, he was in a phone conference with fellow astrophysicist Gabriela Gonzalez from Louisiana State University, as well as scientists thousands of miles away at LIGO Hanford in the state of Washington. 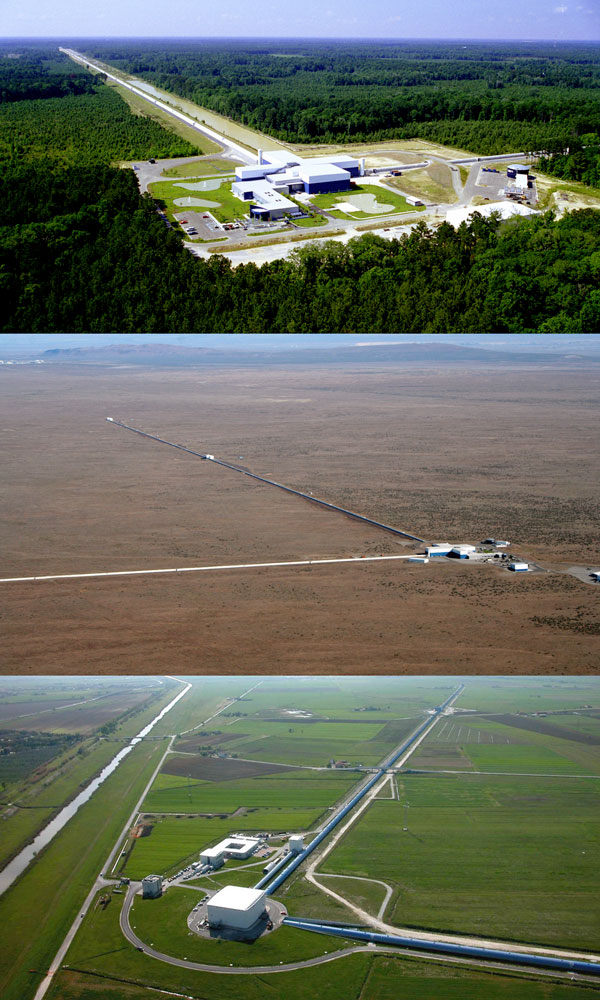 Aerial photos of LIGO Livingston in Louisiana, LIGO Hanford in Washington, and Virgo in Italy.

An excerpt from the original alert sent out at 8:21 a.m. local Livingston time. Bold text added for emphasis.

"If the phone call had been 10 minutes later, I would have been in my car on the way to work and I might have missed the whole thing," he said. That “whole thing” turned out to be a once-in-a-lifetime discovery.

At 7:41 a.m. local Livingston time that morning, the Fermi Gamma-ray Space Telescope, LIGO Hanford and the Virgo gravitational wave detector in Europe had all detected two incredibly dense objects called neutron stars smashing into each other -- an event some astronomers thought they would have to wait years or even decades to see.

But they needed LIGO Livingston's data to confirm the signal. Due to a computer glitch, the data couldn't be processed automatically -- the glitch needed human intervention. O'Reilly and his colleagues promptly fixed the problem and ran the algorithm again.

Immediately, the probability that the signal was a false alarm went way, way down, O'Reilly said. He now knew the detections were not from a random noise, or a fault in the instruments -- this was for real.

At precisely 8:21 a.m. local Livingston time, Reed Essick, a doctoral student from the Massachusetts Institute of Technology, sat in front of his computer and posted a message to the Gamma-ray Burst Coordinates Network, or GCN, a confidential communication network that distributes information on fleeting cosmic events that give out enormous explosions of gamma rays, like the neutron star merger had.

It was the first time in history that humans had detected such a merger. But the data from the gravitational waves and gamma ray detections alone could not pinpoint the exact location of the collision. It was now time for optical telescopes around the world to take over the night sky.

Shortly after the GCN message went out, Mansi Kasliwal, an astrophysicist from Caltech in Pasadena, also got a phone call.

"It was a completely automatic, robotic call from the software system I have [set up] to listen to alerts that were sent out by LIGO and Virgo," said Kasliwal. She is in charge of GROWTH, a global relay network for alerting and coordinating observatories around the world.

To observe certain astronomical events, especially ones that only last for a short period of time, observatories around the world need to coordinate with each other so that somebody is always watching on the dark side of the planet, said Kasliwal. GROWTH makes sure that when one telescope is blinded by daylight, another one further to the west will take over the observations, almost like an empire where the sun always sets.

But even with 18 telescopes around the globe, the GROWTH network still doesn't cover the entire night sky. A few hours after the initial detection by LIGO and Virgo, the source of the neutron star merger had been localized to an area roughly the size of 150 full moons, or about the size of your palm if you stick it as far away from your eyes as possible. The area was in the southern sky, near the Hydra constellation. As Earth rotated westwards, the next possible telescope that could observe it would be in South America, where unfortunately GROWTH does not have a presence.

Kasliwal quickly alerted astronomers at the Carnegie Institute for Science, which operates a number of telescopes in Chile. They had also seen the GCN alert and were discussing the plan of action.

It was now their turn to shine. 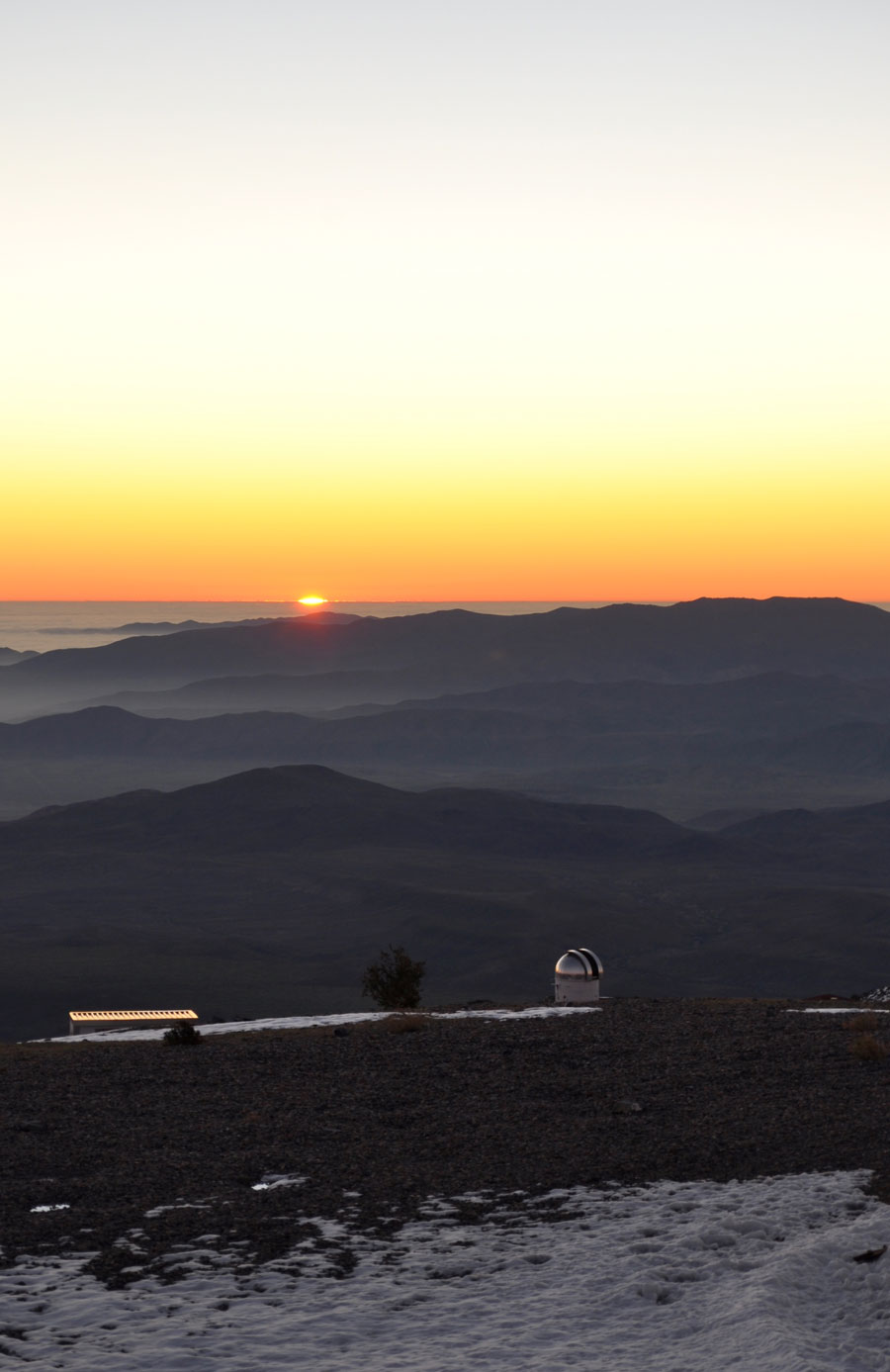 Sunset at Las Campanas Observatory on Aug. 16, 2017, visible in the foreground is the Swope telescope.

A new glint in the southern sky

Nearly 8,000 feet above sea level in the Atacama Desert in Chile, the weather at the Las Campanas Observatory was cool, the air was crisp, and there was still some snow left on the ground from a storm just a few days prior. But most importantly, the sky was clear.

"We didn't get the list of galaxies to look at until -- I think it was 18 minutes before the start of the night," said Josh Simon, one of the astronomers observing that night. Having stayed up the three previous nights, Simon was now on his last night shift.

Even with the precise localization provided by LIGO and Virgo, the key patch of sky still contained about a hundred galaxies that needed to be scanned. Limited by the short time window between sunset and when the area of interest dipped below the horizon, Simon and his colleagues had little more than an hour to look over all the candidates.

About 10 minutes into the night, at 8:33 p.m. local Chilean time, Natalie Ulloa, a master’s student from the University of La Serena in Chile, became the first human to set eyes on a neutron star merger. She was stationed in front of the Swope telescope -- the smallest and oldest of the four telescopes at the observatory. A few minutes later, Simon double-checked the signal with the much larger and newer Magellan telescope on the next hill over. The signal was coming from a host galaxy named NGC 4993, located 130 million light-years from Earth.

Less than two hours after the sun set on the Atacama Desert, NGC 4993 too dipped below the Chilean horizon. Within the next 24 hours, as the night sky swept west, observatories In Hawaii, Australia and South Africa would each make their own observations, piecing together a movie of the first neutron star merger ever observed.

Changing color time-lapse of GW170817, first visible as a blue dot and later as a red dot in the upper left hand side of the host galaxy NGC 4993, located in the center of the video. Credit: European Southern Observatory

The dying of the light

During the initial burst of light, the neutron star merger shone a bright blue hue, then gradually faded and became redder over time, finally disappearing from the visible spectrum about a week after the first burst of gamma rays. But the neutron star merger did not go gentle into that good night -- it went on to shine across a wide range of wavelengths beyond the visible spectrum for weeks to come.

"My team decided to use Chandra to look at the kilonova one more time," said Eleonora Troja, a research scientist at NASA Goddard Space Flight Center, during a press conference held Oct. 16 to announce the big discovery. "That's when we saw that the X-ray light had just turned on, and it was amazing."

According to Troja, the X-ray signal, spotted nine days after LIGO’s first detection, would've been too faint for any other X-ray telescopes to see.

Another week would pass before the Very Large Array radio telescopes in New Mexico detected the first radio signals from the merger. That was the last piece of the puzzle, and also the last of the messengers sent to Earth from the spectacular collision 130 million light-years away. In all, observations were made by astronomers from every continent on Earth, including Antarctica.

A pot of gold

A paper detailing the wealth of data collected in those last few weeks of August and early September was published on Oct. 16, along with at least five other major papers about the same merger. The study was the accumulation of work by approximately 3,600 credited authors -- by one estimate more than 10 percent of all the astronomers in the world. According to some researchers, it has provided unequivocal evidence that neutron star mergers are a major source for almost half of all the elements heavier than iron. From the uranium inside a North Korean nuclear bomb to the gold on your grandfather's watch, heavy elements were likely once produced by two neutron stars smashing into each other at nearly the speed of light.

The wide spectrum of light observed from the merger was something like a rainbow, said Andy Howell, an astronomer from Las Cumbres Observatory in Goleta, California, during the Oct. 16 press conference. Unable to contain his smile, Howell let out a smirk as he delivered the rest of his opening speech.

"So there really was a pot of gold at the end of a rainbow."

Editor's Note: This story has been updated to clarify a description of the setting in the first paragraph and to correct the number of credited authors on the paper.