Software helps a conservation group see where shade trees will best cool a river. Then the hard work starts.
Image 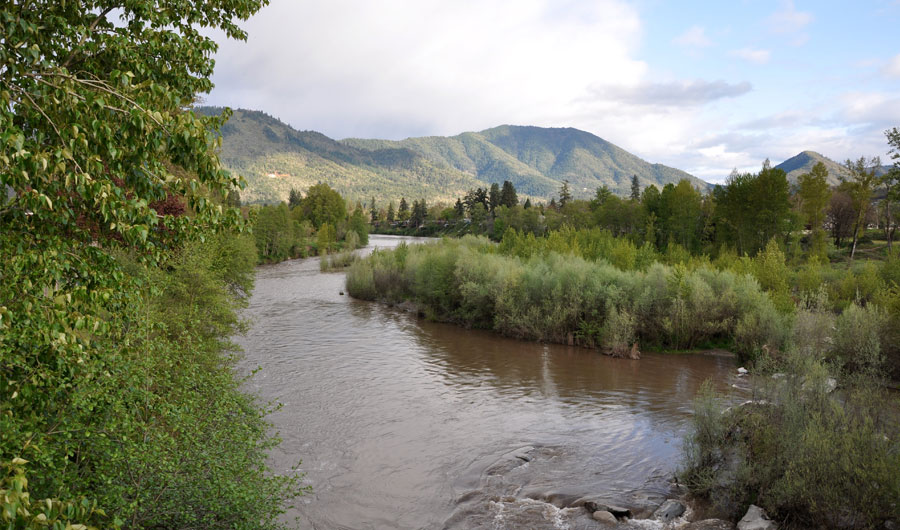 (Inside Science) -- In 2011, the city of Medford in Oregon had a problem. The treated water being released into the Rogue River from its sewage treatment plant was too warm, threatening the river’s fish.

The historically cool Rogue River was already warming, and Medford's discharge could raise the temperature by another 0.18 degrees Celsius. Warmer rivers have less oxygen, and cause fish to hatch earlier and die younger. To stay on the right side of Environmental Protection Agency regulations, Medford had to find a way to cool down its wastewater.

“We looked at agricultural re-use, chillers, cooling towers and lagoons, but all the options were really expensive – more than $15 million,” said Tom Suttle, construction manager for the city's water reclamation division.

Then the city was approached by The Freshwater Trust, a Portland-based conservation group, with a different solution -- pay landowners along the river to plant trees to shade the water and keep it cool. The decision was easy, said Suttle.

“It was half the cost of anything else, plus had multiple benefits for the river like habitat restoration and bank stabilization,” he said.

The trust uses a software tool it developed called BasinScout to choose where to focus its planting efforts. The tool pulls together a variety of different data sources -- the most important in this case being how the riverbank is oriented relative to the sun -- to identify the patches of land along the Rogue and its tributaries that will provide the most benefit in terms of cooling. Then it's up to Denis Reich, the trust's recruitment director, to convince the landowners to sign on to the project.

“We get the full range of responses, even 'get off my land'-type responses, which fortunately are pretty rare. The most common is probably polite disinterest,” he said. “The landowners we end up partnering with are the ones who are already interested in and open to this kind of work.”

The trust's workers clear out the hemlock and invasive Himalayan blackberries that grow so densely along the river they are impossible to walk through and replace them with small saplings of native trees like cottonwood, ash, alder and pine, as well as smaller shrubs. The trust's workers visit frequently to maintain the site, providing irrigation, weed control and screens to protect the growing saplings. Once a planting is established, it is evaluated by third-party auditors, who determine the value of the “temperature credits” the trust can sell to Medford. The proceeds from these credits go toward supporting the project and paying the landowners.

The project has not yet made a huge difference to the overall temperature of the Rogue, said Reich, but it can have a big effect on isolated water pockets, especially when several planting sites are bunched together. Those pockets can provide vital habitat for spawning fish and other animals. The trust is currently running a study to quantify the microclimate impacts that its plantings can have on ecologically important parts of the river, and hopes to have results in the next five years or so, said Reich.

Bill Leavens was one of the first landowners in the area to sign on. He was skeptical at first, as the project required a 20-year commitment, as well as agreeing to provide the trust's workers access to his property, and he had been involved in river restoration projects before that were unsuccessful. But he was impressed by the trust's commitment to ongoing maintenance to ensure the new plants would thrive, and their use of local contractors to do the work.

The trust identified a 75-foot stretch of Leavens' riverfront as a good site to provide shade, and went to work clearing and planting.

After just a few years the results are impressive, said Leavens, with cottonwood trees already 20 to 30 feet high. “I was concerned at the onset because some of the saplings were so small, but the darn soil is so rich it's amazing to see the growth,” he said. “The success has been so great we might need to do some trimming.”

Leavens said he gets around $1,000 a year from the project and it has helped improve the value of his property, but that is not his main reason for taking part. The chance to help restore and improve the river he loves is what motivates him.

The city, for its part, is more than pleased with the results, said Suttle. “It's gone way better than anyone thought, we're far ahead of where we thought we would be,” he said. When the contract comes up for renewal, he expects the city will increase the number of credits it buys.

That success has helped the trust expand its work in the Rogue river watershed, said Julia Bond, the organization's science director. A new project, funded by the local drinking water producers, will study how agriculture practices affect stream bank erosion and the amount of sediment that gets into the river. The BasinScout tool will use a variety of data sources like land use records, land cover information and scans taken with LIDAR, a remote sensing tool that can use light to gather information about the surface of the Earth. The software will then help identify the areas where changes in agricultural practices -- such as fences to keep cattle out of the river or a switch from flooding to sprinkler irrigation -- can help reduce erosion and keep the water clear.

“It's a chance to expand the benefits we can give to a single river basin,” said Bond. Those benefits are what get the local people on board. Suttle said he and his colleagues are proud to be doing something to protect the river. “Even though we work in a sewage treatment plant, most of us are outdoorsmen, we spend a lot of time on the river,” he said. “With this project I feel like I am leaving something behind when I retire, like I'm giving something back for my grandchildren.”