Mysterious dark matter particles may be blowing past Earth at 1.8 million kilometers per hour.
Image 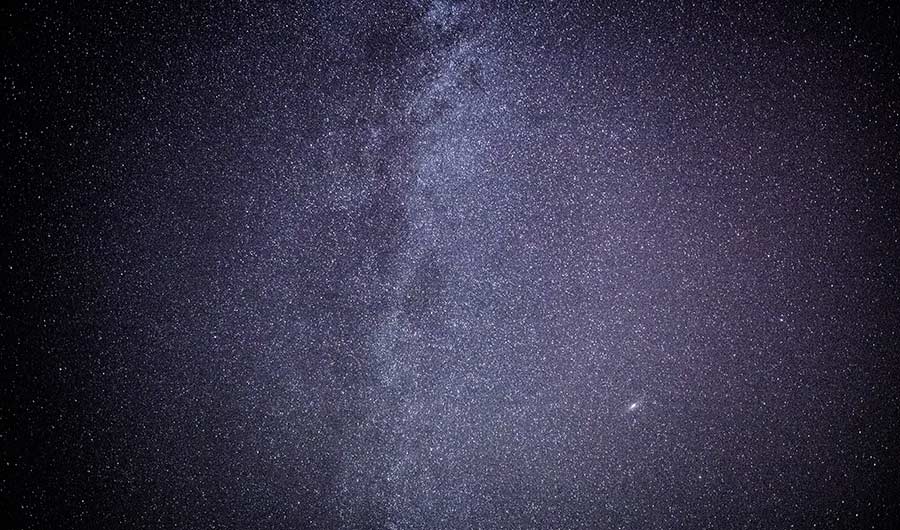 (Inside Science) -- A dark matter hurricane may be blowing through the solar system with winds strong enough to generate powerful signals in future searches for the invisible substance, a new study finds.

Dark matter is thought to make up roughly five-sixths of all matter in the universe. Scientists proposed its existence to help explain a variety of cosmic mysteries, such as why galaxies can spin as fast as they are seen to without being torn apart. Researchers have largely ruled out all known particles as possible explanations for dark matter, and the consensus is that dark matter is likely a new kind of invisible and mostly intangible material that is largely detectable only via its gravitational influence.

Scientists think dark matter within the Milky Way is distributed in roughly the form of a giant, spherical blob. "We call it a dark matter 'halo' because it surrounds the entire galaxy," said study lead author Ciaran O’Hare, an astroparticle physicist at the University of Zaragoza in Spain. "We are inside the halo, so in a sense we are swimming around in a sea of dark matter all the time."

However, when the Milky Way's gravitational pull rips apart one of the smaller galaxies orbiting it, computer models suggest that streams of stars and their accompanying dark matter should flow into our galaxy. These streams "are essentially the scars or fossils of violent destructions of smaller galaxies that occurred over the billions of years it took to form the galaxy we live in now," O'Hare said.

Previous work found about 30 stellar streams flowing through the Milky Way. In theory, the speeds at which these streams travel might have noticeable effects on lab experiments designed to detect the rare instances in which dark matter particles might collide with normal matter. However, until now, none were known to pass anywhere near the solar system, O'Hare said.

Now O'Hare and his colleagues have detected a stellar stream dubbed S1 that should already be crossing paths with the sun. With this stream should come what the scientists call a dark matter hurricane, in which dark matter particles blow by at 1.8 million kilometers per hour.

The scientists analyzed data from the European Space Agency's Gaia satellite, which is creating a 3D map of more than a billion stars across the Milky Way, as well as from the Sloan Digital Sky Survey conducted using the Apache Point Observatory in New Mexico, which has created the most detailed 3D maps of the universe made yet. They found a nearby collection of stars all moving in the same direction.

The researchers suggest S1 is the remnant of a dwarf galaxy the Milky Way devoured billions of years ago. This long-dead galaxy likely had roughly 10 billion stars, possessing a mass comparable to the present-day Fornax galaxy, the largest surviving dwarf spheroidal galaxy orbiting the Milky Way. The Fornax galaxy is heavy with dark matter, suggesting that S1 is likely also rich in dark matter.

"What is remarkable about S1 is that its direction is the opposite one to which we are moving in the galaxy," O'Hare said. "So it's like we are moving into the current and the dark matter is hitting us smack in the face."

Knowing S1 exists is helpful because in the past, scientists did not know what directions and speeds dark matter particles passing through Earth might travel at, leading "to a lot of uncertainty when we are trying to predict what an experiment might see," O'Hare said. "These new observations are gradually helping us to rein in these uncertainties."

To predict what dark matter detectors on Earth might see, O'Hare and his colleagues calculated the properties of the dark matter hurricane with two leading models of dark matter. One involved axions, which in principle have exceedingly low mass -- perhaps less than a billionth of that of an electron. The other involved weakly interacting massive particles, or WIMPs, which are perhaps roughly 100 times the mass of the proton. "They looked at both axions and WIMPs very comprehensively," said astroparticle physicist Anne Green at the University of Nottingham in the U.K., who did not participate in this study.

If dark matter is made of axions, the researchers found S1 would make it significantly easier for current instruments to detect such particles. The extraordinarily light nature of axions makes it challenging to tell axion detection apart from random minor errors on the part of the detectors. The fact that S1's winds are all blowing mostly in the same direction makes it easier for scientists to distinguish the actual detection of axions from noise in the measurements.

In contrast, if dark matter is made of WIMPs, the dark matter hurricane would only provide a minor benefit to current WIMP detectors -- its winds would impart extra energy to such particles if they exist, making them a bit easier to detect. S1 would provide a greater benefit to proposed future WIMP detectors, since they can also detect the direction that WIMPs are traveling in and so catch glimpses of the potential influence of S1's winds.

"Later down the line, when we eventually get to see a positive signal, we can be extra confident of it being dark matter because we can check that the unique signals of S1 are there," O'Hare said.

Future research can also analyze Gaia data to get better estimates of how much dark matter might exist within S1, Green said. This information could help researchers better understand any results from dark matter detectors.

The scientists detailed their findings online Nov. 7 in the journal Physical Review D.