Why Do So Many Americans Win the Nobel Prize?

According to experts, it's strong historic investment in basic science, academic freedom for researchers and patience to see results.
Image 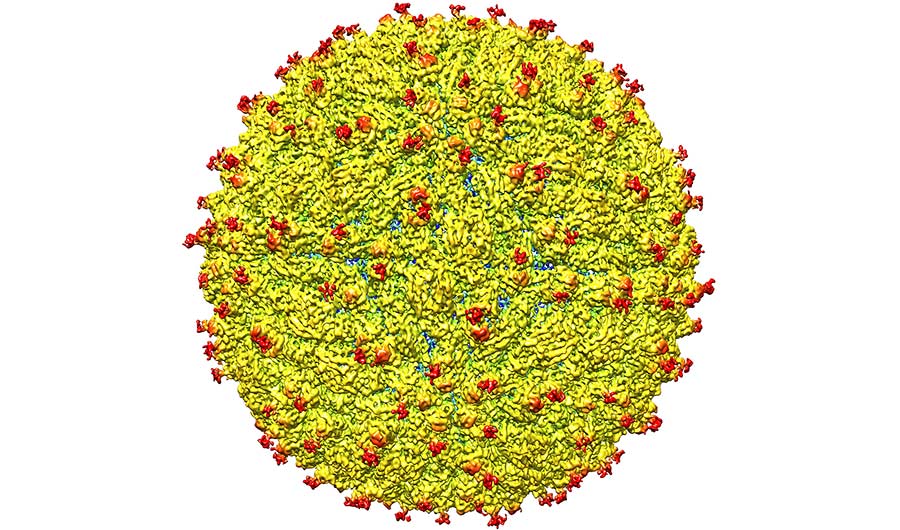 A representation of the surface of the Zika virus, made using the cryo-electron microscopy technique in 2016, developed by a team led by Purdue University researchers.

(Inside Science) -- Amidst talk of scientific revolutions at a press conference in Stockholm for the Nobel Prize in chemistry on Wednesday, a woman identifying herself as a freelance radio reporter from China raised her hand in the camera-packed, wood-paneled room and asked why so many Americans win the Nobel Prize.

Seven of the nine science Nobel winners this week are affiliated with American institutions, though not all were born here. Going back more than 100 years, some 264 winners were born in the United States, and many others immigrated to the U.S. to conduct research at American institutions. The next highest country is the U.K., as the birthplace of 84 winners, though it beats the U.S. in winners per capita.

In response to the reporter's question on Wednesday, Goran Hansson, the secretary general of the Royal Swedish Academy of Sciences, said the primary reasons are funding and academic freedom. Since the mid-20th century, the United States has spent a tremendous amount on fundamental or "basic" research, not forcing scientists to work on projects with an immediate application as the goal.

Experts in science funding agreed that the overabundance of American Nobel Prize winners is no coincidence. Basic science is where the biggest long-term breakthroughs come from, and Nobel Prizes tend to recognize those breakthroughs. So, if you want to know the secret of today's Nobel Prizes, you have to look to the past.

"These prizes are a lagging indicator," said Marc Kastner, a physicist in California who heads an organization called the Science Philanthropy Alliance, which works with donors on ways to direct their giving toward basic science research. "They show us what we were doing right decades ago."

The strength of American post-war science

Although this year’s chemistry Nobel Prize recognized only one American researcher -- German-born Joachim Frank -- in its trio of winners, the development of cryo-electron microscopy -- the technique behind the prize -- still illustrates the payoffs that can come from basic science research in the United States.

"This prize is based mainly on steady advances in cryo-EM made in the 'golden era' of funding for basic science in the USA, following Sputnik," said John Spence of Arizona State University.

Though much of the work took place in Europe, the portion of work taking place in the United States benefitted from a permissive climate for basic science research. Kastner traces that climate back to the end of World War II and to the vision of engineer and science administrator Vannevar Bush, who led the Office of Scientific Research and Development, which oversaw the Manhattan project.

At the end of the war, Bush prepared a report to the president that placed a strong emphasis on basic research and eventually led to the creation of the National Science Foundation in 1950. He adopted the position that it was the government's responsibility to do basic research through the universities. That model became enshrined in the U.S. approach to financing science after the war, one fruit of which is the overabundance of Nobel Prizes for researchers at American universities.

"The resources for smart people to try creative things have been there because the federal government has been willing to take the gamble," Kastner said.

Kastner's organization seeks to offer advice to philanthropists and to increase philanthropic support for basic research. "It will never take the place of federal funding, but it can do things the federal government has trouble doing," he said.

National Institute of General Medical Sciences director Jon Lorsch leads an agency that funds about 11 percent of all NIH grants, including the work of many past and present Nobel laureates. He said historically about half of the research funds across NIH agencies have gone toward basic research, much of it funded through investigator-initiated grants where the agencies fund the ideas the scientists themselves come up with.

Last year, he was one of several agency heads who co-authored a letter with NIH Director Francis Collins in Science Magazine affirming the NIH's support for basic science. It specifically mentioned cryo-electron microscopy as a transformative area that has yielded "spectacular" returns on taxpayer investment.

Lorsch also pointed to his agency's creation of a new funding mechanism for basic research into technology that seeks to give grants to physicists, engineers and other people who are not themselves biologists but who might develop basic technology biologists may use.

"We wanted to find a way to support those crazy ideas that are going to transform biology in the coming decade," Lorsch said.

But if crazy ideas take decades to come to fruition, to what extent does the public understand and appreciate the connection between basic research funding and scientific advances?

The case of missing returns

You can blame Archimedes, in part, for any expectation of immediate returns. That ancient, apocryphal story of him pondering how to weigh the gold in the king's crown, crawling into the brimming bath, tipping the water from the tub, and then running naked through the streets of Syracuse shouting, "Eureka!" belies the long, deliberative process that modern science has become.

"It can be decades before a basic science finding leads to a breakthrough in terms of applications," Lorsch said.

Because the practical applications of all basic discoveries are not always immediately obvious, he added, funding agencies often evaluate basic research by looking at things like the number and quality of publications stemming from the research, derivative technologies, patents or collaborations that emerge.

But does the general public get that?

"We have been incredibly ineffective at communicating the products of basic research," said David Helfand, an astronomer at Columbia University who serves on the board of the nonprofit organization Science Counts, which seeks to promote public awareness and support of science.

(Editor's note: Helfand also sits on the board of directors of the American Institute of Physics, which publishes Inside Science.)

If you ask the public their views on science, most will consistently say they love it, Helfand said. But when you ask people what they would cut if they could cut any discretionary spending, he added, "scientific research comes out number one every time."

This hints at a disconnect between appreciating the tangible results of science and the slow, accumulation of knowledge that drives those advances. People love discovery but not paying for discovery, Helfand said.

Helfand and his colleagues just launched a test campaign this week that seeks to engage the public beginning next spring in several midsized cities like Dallas, Texas that will seek to gain insight into public attitudes toward science in order to inform public outreach.

"We are going to engage people in a serious way and see if they will take action," Helfand said.

Other efforts are also underway to connect the dots.

This summer a group from Northwestern University in Evanston, Illinois published a study that surveyed 5 million U.S. patents and 32 million research articles from around the world and attempted to map the connection between the two. It found that most new patents can be tied back to research articles.

Another group at the University of California, San Francisco and the Gladstone Institutes examined two different recently FDA-approved drugs and used the tools of network analysis to attempt an unbiased approach to linking the success of those drugs to the constellation of research articles that led to their approval.

"What we found when we analyzed that was rather surprising," said R. Sanders Williams from the Gladstone Institutes and the University of California, San Francisco.

"Much of that work was purely basic science," Lorsch said.

What the work showed, said Williams, was evidence for the need to fund a broad base of basic science. "Everyone wants to fund that last step, and few recognize you have to fund that broad base," he said.

Editor's note (10/10/2017): This story has been edited to clarify the proportion of NIH funds that go toward basic research.