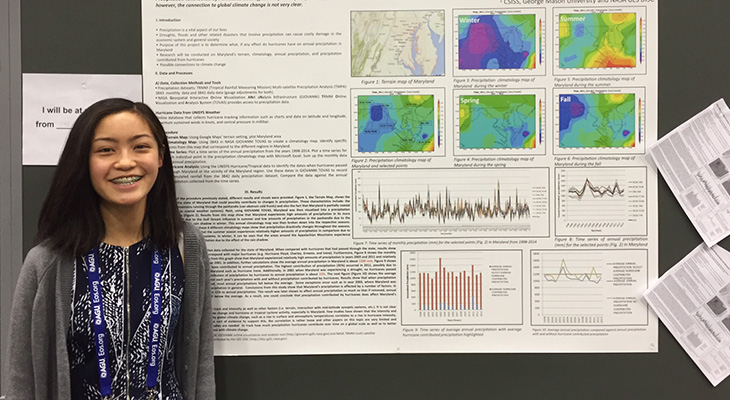 (Inside Science) -- While wading through the poster session at last month's American Geophysical Union meeting in San Francisco I spotted something unfamiliar, amid the countless aisles of scientists presenting their research. Standing next to one poster was Jackie Liu, a sophomore at Urbana High School in Frederick, Maryland. Amongst the undergraduates, graduate students and professors in the hall, she stood poised to field questions about her own original research.

Both of Liu's parents are researchers. Her mother, Yi He, is a microbiologist and chemical engineer and her father, Zhong Liu, is an expert at managing large data sets for NASA, so her initial curiosity started at home.

"My dad recommended that my project could involve using the NASA global precipitation database," said Liu.  "I started to think of things that involved precipitation that also affected the area around me [in Maryland]."

Talking with her mom about the large, intense hurricanes that have been influencing Maryland's weather inspired Liu to learn more.  "I decided to conduct my project on how hurricanes affect Maryland's precipitation and if there exists any correlation between this perceived increase in hurricane activity and global climate change," said Liu.

She spent two weeks analyzing annual precipitation data for Maryland. "I think the main thing those two weeks taught me was to always be organized and diligent in how you record and plan out your research," said Liu. "I had never really done extensive work in [spreadsheet program Microsoft] Excel so making these huge data sheets was an entirely new thing to me."

Conducting her own research taught Liu about trial, error and about getting into the research "zone."  It gave her a chance to put the scientific method that she was learning about in school in action.  "Obviously, I made a couple of mistakes at first, but after overcoming these slight difficulties, I've found that I really do enjoy data collection and analysis," said Liu. "I also find it to be really methodical and almost therapeutic to be able to work on my own and let myself get lost in the work."

Ultimately, Liu found that hurricanes contribute about 15% toward Maryland's annual precipitation. She recommends further studies to learn more about how hurricanes have influenced overall local precipitation over time.  "I'm in the process of trying to get my research published," said Liu.

When Liu was asked about advice for middle and high school students who are interested in studying science, she said, "I want to encourage any other peers of mine to pursue science if you're really interested," said Liu. "My parents have drilled into my mind that high school is the time to explore whatever may interest you. For me, and maybe for you, that's science. Talking to your guidance counselor and putting yourself out there does wonders on getting internship positions and research projects. Get started in science as soon as possible for not only does it prepare you for the possible future you may have in the field, but it's also a wonderful and really eye-opening experience."