Climate change may be contributing to the animal’s decline
Image 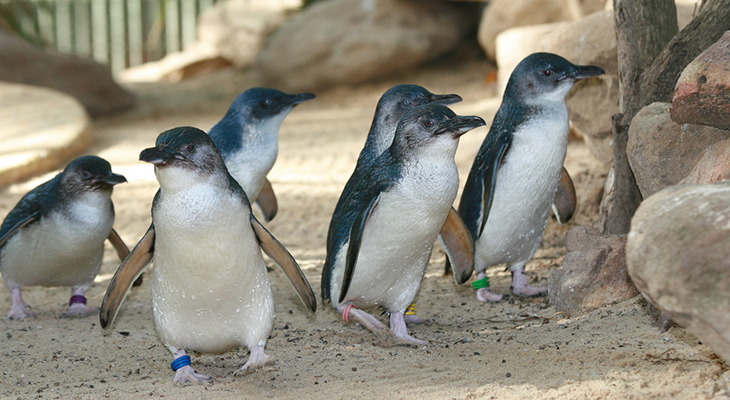 Little penguins are the world’s smallest penguins. But a warming ocean could be placing the animals, also known as blue or fairy penguins, in jeopardy.

(Inside Science) -- At less than a foot tall, little penguins are the world's smallest penguins. But the animals, also known as blue or fairy penguins, are facing an outsized opponent: a warming ocean.

"There's cause for concern for the species," said Gemma Carroll, a doctoral student at Macquarie University in Sydney. "Some colonies appear to be in decline."

Carroll studies one such colony -- on Montague Island off the southeast coast of Australia. There, the number of penguins has been decreasing since the 1990s, she said on Monday at the Ocean Sciences Meeting in New Orleans, Louisiana.

Scientists aren't exactly sure why the populations are declining, but some have suggested that rapid warming in the surrounding ocean may be causing changes in the food available to the penguins.

Little penguins live in southern Australia and New Zealand. They weigh just a bit more than 2 pounds and feed on creatures such as anchovies, sardines and krill. In southeast Australia where Carroll works, the East Australian Current -- the same one the character Marlin "surfed" on his quest to find Nemo -- sweeps large amounts of warm water from the tropics down the east coast of the country and helps drive the upwelling of nutrients that sustain the penguin's prey.

Scientists are still figuring out why that might be -- parsing out the influence of natural variability in warming and cooling in the system with changes possibly induced by climate change.

"It's really important that we understand what might happen to these ecosystems as these systems change," she said.

To that end, she and her colleagues tracked little penguins over 3 breeding seasons in 2012, 2013 and 2014.  They attached GPS trackers and accelerometers -- devices that record motion around three axes and are often included in smartphones -- to the backs of the penguins, which allowed the researchers to tell when, out in the wild, the penguins were simply swimming around and when they had actually snared a fish or other creature.

The devices revealed that the penguins were most successful at catching food when the water temperature hovered between about 19-21 degrees Celsius (about 66-70 °F). At temperatures cooler and warmer than that range, the penguins didn't fare as well. And when hunting, the animals appeared to seek out the coolest available spots, especially in warm summer months.

Interestingly, commercial sardine catch numbers from other parts of the world show a similar relationship with sea surface temperatures, she said. As a result, it's likely that the rise in water temperature could be causing sardines, which can make up a large portion of the penguin's diet, to move elsewhere.

Because the penguins have a relatively limited daily range -- during the breeding season they can only travel about 12-15 miles each day -- the animals can't simply travel farther to find more food, said Carroll.

By the end of the century, scientists expect the sea surface temperature along the east coast of Australia to increase by about 9 degrees Fahrenheit. Those higher temperatures may have a big effect on how successful little penguins are at feeding themselves in the future, said Carroll.