How Do Giant, Super-Earth Planets Form?

Our planet might not have always been the biggest rock in the inner solar system.
Image 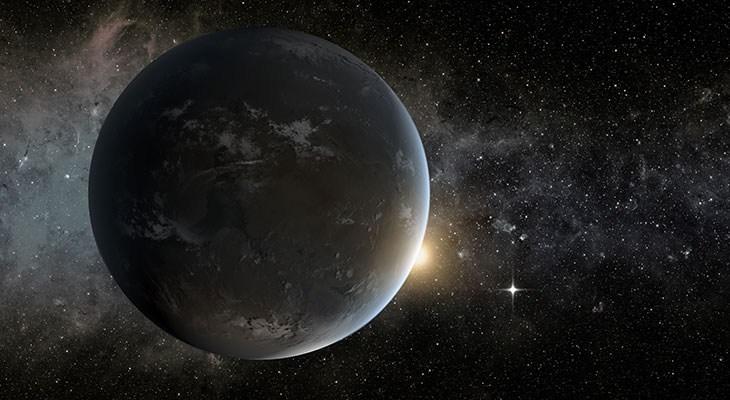 The super-Earth planet Kepler-62f (shown in this artist's concept) is located within the habitable zone of a star in the constellation Lyra, about 1,200 light-years from Earth.

(Inside Science) -- Our early solar system might have formed a giant terrestrial, rocky planet that dwarfed Earth and its neighbors. But if it did, gravity likely pulled that planet into the sun, where it burned up long ago, researchers said.

Such massive planets, called "super-Earths," can be up to ten times as big as our world. They seem to be ubiquitous in the Milky Way, but our solar system is "somewhat special" in that it doesn't have a single one, said Rebecca Martin, an astrophysicist at the University of Nevada, Las Vegas. The smallest planet bigger than Earth is Neptune, and it's a gas giant.

In a new study, Martin and her colleague Mario Livio sought to understand how the solar system could have a dearth of super-Earths. They modeled the processes through which these massive worlds assemble in planetary systems. They examined two ways that they could form, either close to or far from the stars they orbit, by slowly accumulating material over millions of years from clouds of gas and clusters of rock spiraling around. They are publishing their findings in an upcoming issue of the Astrophysical Journal.

A majority of the thousands of planetary systems detected so far host super-Earths. But with NASA's Kepler spacecraft and other telescopes, astronomers struggle to identify smaller planets, which are minuscule compared to their stars. As a result, it's not clear whether Earth-size planets are even more common than their bigger cousins.

"The jury's still out on that," said Ian Crossfield, a planetary astronomer at the University of Arizona who was not involved in the study.

Most super-Earths are found in close proximity to their host stars. Many systems appear to have one or even two planets closer than Mercury is to our sun, though this could be due to 'a bias in detection techniques toward finding more close-in planets. In the 19th century, astronomers once thought that our inner solar system might be more crowded, and they hypothesized the existence of a planet they dubbed "Vulcan." But the hypothesis was based on a misunderstanding of Mercury's orbit, and the mysterious planet was never found.

Martin and Livio developed computer simulations to investigate the evolution of planetary systems. First, giant clouds of gas and dust, hundreds of light-years across, begin to coalesce and form new stars. Then, gas and rocky debris rotate rapidly, turning into a proto-planetary disk.

Some regions in the disk have a lot of turbulence and friction, and like quicksand they slow down the material, which then falls inward toward the star. In an area with no friction, often called a "dead zone," bits of rock stay in their own circular orbits, clumping together and building the embryo of potential planets. "It's acting like a plug in the flow, and then material piles up," Martin said.

Stars rich in heavy metals — chemical elements more complex than hydrogen and helium — tend to build large and dense planets close in. Other stars form icier super-Earths farther out. Planets aren't stuck in the orbits they're born in, however. They can move or "migrate" nearer or farther away from their sun, like a sailboat changing course with the wind, an effect Martin and Livio include in their model. This could have happened with Jupiter if its orbit had been affected by Saturn's.

On the other hand, if two planets have oval-like orbits close to each other, one could jostle and divert the path of the other, even ejecting it out of the system, never to be seen again. Our solar system doesn't appear to have orbits like that—unless the recently proposed "Planet Nine" is discovered in the system's outer realms.

"If super-Earths formed in the inner regions of our solar system," Martin speculates, "then they must have migrated quickly through the disk and fell into the sun." In the process, these giant planets would have attracted rocky debris close to the sun, shepherding it toward its fiery death. This would explain why we don't have any planets closer in than Mercury, unlike many other systems.

Super-Earths didn't necessarily form in the solar system's distant past, said Crossfield, but if they did, Martin's model provides an explanation of their fate.