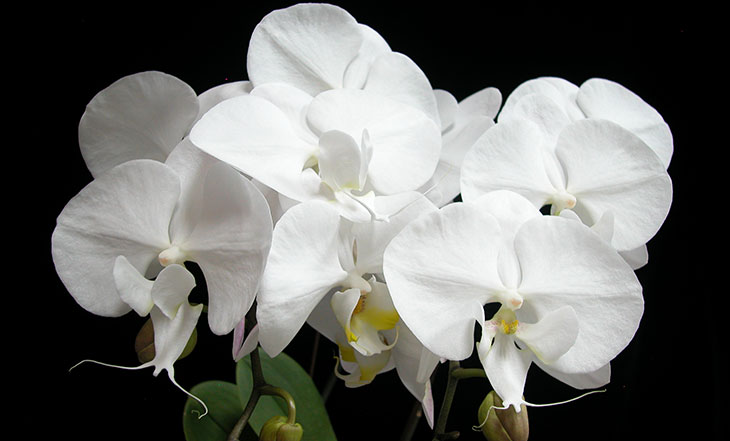 (Inside Science) -- Orchids come in extraordinary diversity. With more than twice the myriad species of birds, orchids make up what may be the largest family in the plant kingdom. Now, scientists are unlocking the genetic mechanisms that make orchids unique among flowering plants.

The more than 26,000 recognized species making up the orchid family are full of oddities. For example, Dracula orchids, several of which possess blood-red blossoms, are pollinated by flies that are lured in by flowers that look and smell like the mushrooms on which the insects normally lay eggs. Ophrys orchids, on the other hand, look like female bees, transferring pollen when males of the insect species attempt to have sex with them. Orchids are often such masters of mimicking what pollinators might want that roughly a third of all orchid species do not even put out rewards such as nectar to attract insects, said orchidologist Barbara Gravendeel at the Naturalis Biodiversity Center in Leiden in the Netherlands.

Orchid complexity inspired Darwin's follow-up project to his groundbreaking tome on evolution, "On the Origin of Species." As Darwin's health suffered, he increasingly examined plants from the comfort of his own home. He collected evidence that orchid complexity could be explained by the flowers evolving together with their pollinators, supporting his theory of evolution and countering arguments that orchid complexity required a divine creator. For instance, the orchid Angraecum sesquipedale of Madagascar has a star-shaped flower that releases its fragrance at night and held its nectar on the bottom of a thin foot-long tube. Darwin predicted its pollinator had an unprecedentedly long proboscis, which is an elongated appendage usually attached to the head of an animal, like an elephant's trunk. Twenty-one years after Darwin's death, scientists discovered Xanthopan marganii, a moth that indeed had an unusually long proboscis.

To unlock the secrets of orchid complexity, plant developmental biologist Chang-Hsien Yang at National Chung Hsing University in Taichung, Taiwan, and his colleagues investigated the genetic mechanisms that make orchids different from other flowering plants. While most flowers have protective sepals surrounding the petals that are merely green and leaf-like, orchid sepals are colored and ornamented just like petals to help attract pollinators. In addition to their normal petals, most orchids have an unusually large petal known as a lip that can serve as a landing platform for insects and take on the outstanding shapes that many orchids use to deceive and lure pollinators.

The nature of most flowers can be explained by five classes of plant genes -- labelled A, B, C, D and E -- interacting to develop floral organs. The B-class genes are especially key to petal formation. However, scientists could not figure out how exactly this ABCDE model helped create the orchid lip.

"For instance, you might find one B-class gene active in the lip that helped explain lip formation, but it was also active in petals," Yang said. "That didn't make sense if you thought only a single gene was responsible for lip formation — such a gene should be expressed exclusively in the lip."

Instead, Yang and his colleagues discovered that orchid flower shape is determined by two groups of protein complexes, which they call the L or lip complex and the SP or sepal-petal complex. These complexes, which are each composed of four proteins, compete to promote the formation of the lip and petals, respectively. When the researchers used a virus-based strategy to silence the L complex within the lips of two orchid species, they became like petals and sepals, and when they stifled the SP complex within petals, they became lip-like.

Yang calls their discovery the Perianth code, referring to the structure formed by the petals and sepals. They found many subfamilies of orchids with different types of lips and petals all obeyed this code, according to the findings detailed online April 27 in the journal Nature Plants.

"It's been known for a long time that the current plant genetic models are not completely applicable to orchids," said Gravendeel, who did not take part in this research. "This very simple Perianth code model is very elegant at explaining lip formation. We thought it would be more complex than this."

In principle, this research could lead to new genetically-modified orchids where petals and sepals are converted to lips or vice versa, Yang said. However, in practice, the method that scientists often use to genetically modify other plants does not work well in orchids.

The researchers now plan to identify the genes that go on to control the size, shapes and colors of the lips, sepals and petals. "There are many more aspects to how orchid flowers attract pollinators," Gravendeel said.