The aerial acrobat is less than half a millimeter long.
Image 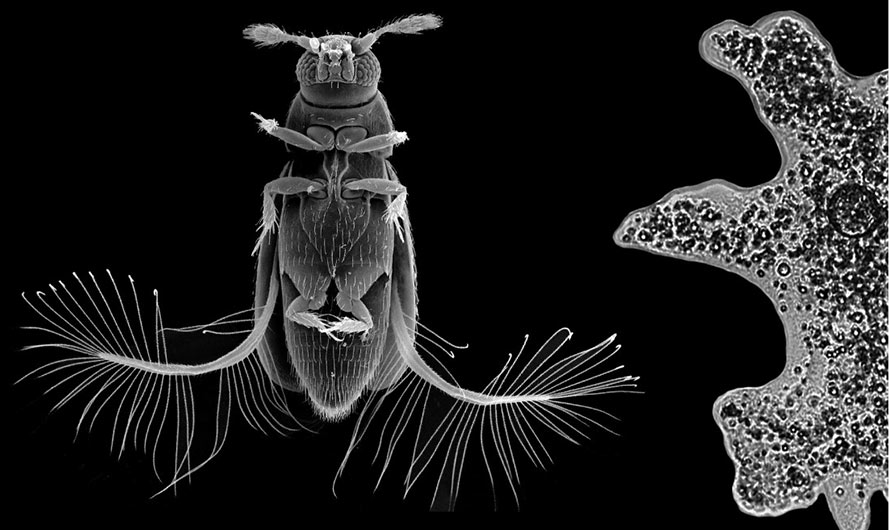 A featherwing beetle, Paratuposa placentis, with the single-celled organism Amoeba proteus on the right for scale.

(Inside Science) -- Small insects typically fly slower than larger ones, but some of the world's littlest insects appear to contradict that rule. Scientists have discovered that a tiny beetle's feathery wings and unusual style of flight may help explain its extraordinary speed. These findings could shed light on the evolution of flight on miniature scales and one day help guide the creation of miniature flying robots.

The featherwing beetle Paratuposa placentis is one of the world's smallest insects at just 395 microns long -- only about four times the average human hair's width and similar to an amoeba in size. For tiny animals, viscous air friction becomes a major challenge to flight, so larger animals often fly faster than smaller ones. However, the tiny featherwing can fly roughly as fast as relatives that are three times bigger, and it can accelerate twice as fast as carrion beetles that are 10 times its size.

To learn the secret of this insect's flight, scientists collected adult P. placentis from a Vietnamese park and recorded them on high-speed video cameras to reconstruct their motion in three dimensions and examine their aerodynamics. They also investigated the structure of the insects' wings using optical, laser-scanning and scanning electron microscopes to obtain the first detailed analysis of a miniature insect's flight mechanisms.

The scientists discovered a number of evolutionary adaptations that helped this miniature beetle achieve exceptional flight performance. For example, instead of the membranous wings that most insects have, its wings each consist of a narrow blade fringed with long bristles, making them somewhat resemble combs. These bristles are in turn covered with outgrowths that make each of them brushlike. This structure makes these wings much lighter than membranous wings of the same size while still letting them block most of the air they encounter.

The light weight of these bristled wings means they "are far superior to membranous wings in terms of the muscular power requirements at such a small scale," said study senior author Alexey Polilov, head of entomology at Lomonosov Moscow State University in Russia. These benefits may help explain why they have evolved independently in miniature species in several insect lineages, he added.

Synchronous high-speed video of a featherwing beetle in flight. By Sergey Farisenkov and Alexey Polilov

In addition, P. placentis's wings move in a way previously unobserved in insects, traveling in a figure-eight loop that includes paddling strokes alternating with claps above and below the body of the beetle. This flight style is similar to rowing motions seen in small crustaceans such as fairy shrimp and water fleas, which swim using their branched legs and branched antennae, respectively -- feathery appendages that likely evolved to help deal with the viscous friction of their surroundings.

Moreover, like other flying beetles, P. placentis protects its wings with hardened wing cases known as elytra. These act like brakes to keep the body from shaking too much as the wings move in their unusual trajectories.

The findings yield insights into how animals can adapt to miniaturizing themselves, said entomologist Margarita Yavorskaya at the University of Tübingen in Germany, who did not take part in this research. "Many studies on miniaturization have revealed that it causes a lot of reduction and simplifications to an organism," she noted. Before this new study on featherwing beetles, "it has been mainly believed that, when flying, they were just floating in the air. The fact that it has been shown that these insects, with a body size comparable to unicellular organisms, manage to maintain high flight performance is a really valuable addition to our knowledge on minute insects and to our understanding of the causes and effects of miniaturization."

These findings may one day help researchers develop new tiny flying machines. "We did not do this study to create tiny flying robot spies, although in principle our findings may eventually be used to decrease the size of unmanned flying aircraft or to improve the performance of the smaller models of such aircraft," Polilov said. It's currently not possible to make flying machines smaller than half a millimeter, he noted.

The researchers are now investigating the flight of other miniature insects to shed light on their biology and roles in ecosystems. "The wing apparatus of many other tiny insects is arranged somewhat differently, because their miniaturization took place independently," Polilov said. "Therefore, our further research is expected to reveal more secrets of the flight of such insects."

The scientists detailed their findings online Jan. 19 in the journal Nature.