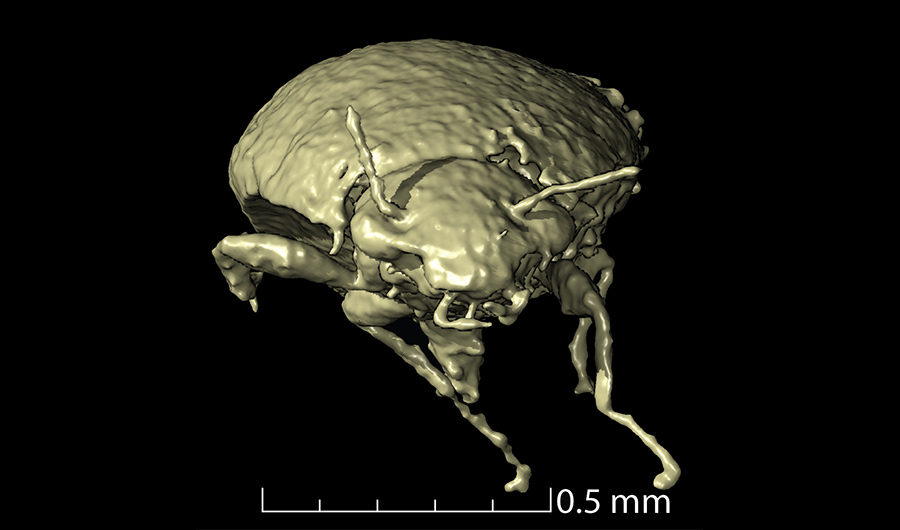 This beetle found in 230 million-year-old feces is a new species named Triamyxa coprolithica.

(Inside Science) -- The death of the beetle may have been ignoble -- swallowed by a lizardlike creature by accident. But the real injustice for this Triamyxa coprolithica is that it has had to wait for 230 million years in a pile of dung before scientists even acknowledged its species' existence.

The discovery of an intact pen tip-sized beetle occurred as researchers were digging into a coprolite, which is a fancy word for fossilized poop, as part of an effort to reconstruct the feeding habits of Silesaurus opolensis. The roughly 33-pound (15-kilogram) reptile is closely related to dinosaurs, but predates them.

The coprolite fossils associated with the reptile contained the remains of a number of insects. Most of these were fragmentary, except for one fully intact beetle. Paleontologists contacted Martin Fikáček, a biologist at the National Sun Yat-sen University in Taiwan who specializes in this sort of beetle.

"It was clear the more we looked at it that it wasn't something that survived until today," he said. Based on CT scans of the coprolite using strong X-ray beams, the researchers determined the insect to be the only known species of a new family. It's related to a similar group still living today, though it isn't their ancestor, said Fikáček, one of the co-authors of a paper describing the new species that was published today in Current Biology. To his knowledge, this may be the first new insect species described from a coprolite. Hence the name: Triamyxa coprolithica.

The reptile sported a beak and was likely about 2 meters long, leading Fikáček and his colleagues to believe the tiny beetle wasn't specifically on the menu. The reptile, which may have been insectivorous or omnivorous, likely swallowed a whole bunch of Triamyxa coprolithica accidentally while munching on something else -- besides the intact specimen, a number of fragments of other individuals of the same species were also found in the fossil turd.

"Probably why it remains so nicely preserved is because it wasn't chewed," Fikáček said. "It was probably present in the environment in large numbers."

Fikáček said it's pretty rare to find tiny beetles like this from so long ago. The oldest specimens found in amber are about 140 million years old. But coprolites can be analyzed with the same CT scans as amber, opening up a whole new potential venue for the discovery of ancient creatures.

"That would be the coolest thing, because we don't have many fossils from insects from this time," he said.