A reporter recalls what it was like to cover the space race.
Image 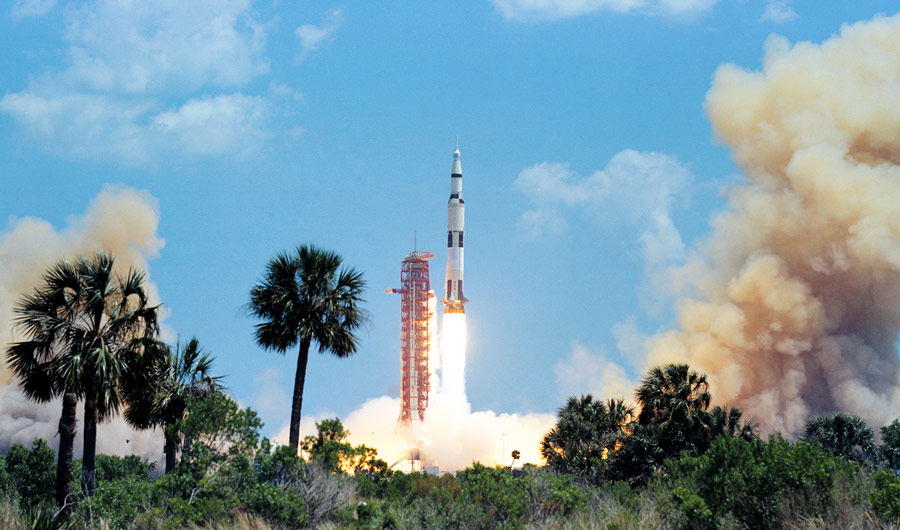 I sat in the bleachers at Florida’s Kennedy Space Center, just three miles beyond the launch pad from which Apollo 11 roared into space, and history.

And I was there on July 20, close to Mission Control at the Johnson Space Center in Houston, when Neil Armstrong and Buzz Aldrin became the first humans to walk on the moon, and on July 24 when they and crewmate Michael Collins splashed down in the Pacific.

I covered the first five manned Apollo flights for the Boston Herald Traveler and the remaining six for Newsweek. For a young British science writer who had arrived stateside in late 1966, the experience represented an extraordinary introduction to the power of American technology and enterprise.

Journalists are meant to view the events they cover dispassionately. But I regarded the opportunity to follow the entire manned Apollo program as an extraordinary privilege.

And I still remember my initial experience of a launch: the first manned Apollo flight, number 7, carried aloft by a Saturn IB rocket on Oct. 11, 1968.

Impressive as the flashing flames of the launch were, they paled against the noise. It sounded like a huge machine gun firing without ceasing, an impression amplified by the vibration of the corrugated roof above the bleachers.

The Saturn V rocket that launched Apollo 8 astronauts beyond Earth orbit and around the moon on Dec. 21, 1967, made more noise. But the memory of that first launch remains clearer in my mind.

So does the light show that accompanied the departure of the last Apollo mission, number 17, on Dec. 7, 1972.

Unlike all the other Apollo launches, this one took place in darkness. As the rocket slowly ascended from its pad, its flames converted the pre-dawn blackness into a huge circle of blue sky. It was close to a spiritual experience.

Apollo 8 had its own spiritual appeal. As astronauts Frank Borman, James Lovell and William Anders orbited the moon on Christmas Eve, 1968, they read the first creation story in the Book of Genesis.

Even cynical journalists in the Johnson Space Center’s press room seemed silenced, if not impressed, as they listened to the NASA feed.

That flight had its downside for me. I had to spend Christmas in the company of journalists and public information officials instead of with my wife and newborn son. But the experience was unforgettable.

Covering the Apollo program didn’t lack drama of its own.

Those were the days of tension between print and television reporters. As the numbers of national and international press members increased flight by flight, culminating in a post-tower of Babel gathering for Apollo 11, so did the pressure.

Print people resented the space taken up by the TV technicians with their cameras and cables, while the technicians made their irritation obvious when print journalists tripped over their equipment or walked into shot. I don’t recall any fistfights, but I remember heated verbal exchanges.

Print journalists also faced the pressure of communicating with their publications.

If the Apollo program relied on primitive computing methods, reporting on it also depended on last-century technology: rotary phones and Western Union.

We used our phones to update our publications on late-breaking events. But most of the time we handed our typed copy to a Western Union telegrapher to transmit to our editors.

Helping the press “was a very important business,” former Western Union archivist Amy Fischer told me recently. The Apollo program “certainly was a high-profile piece of it.” Indeed, a top executive of the company oversaw the operation at every spaceflight.

As we prepared to return home after the exhausting assignment covering Apollo 11, David Spurgeon of the Toronto Globe and Mail and I decided that our publications should treat us to lunch at Brennan’s, a notable Houston restaurant. Our waiter was obviously fairly new to the United States but already a citizen.

“I am so proud of my country,” he told these two foreigners, in a thick Eastern European accent.

He deserved to be proud. And I felt proud of the extraordinary triumph that my adopted country had achieved, and the opportunity to witness it up close.