Biodiversity in the Oceans Exploded After Dinosaurs Fell 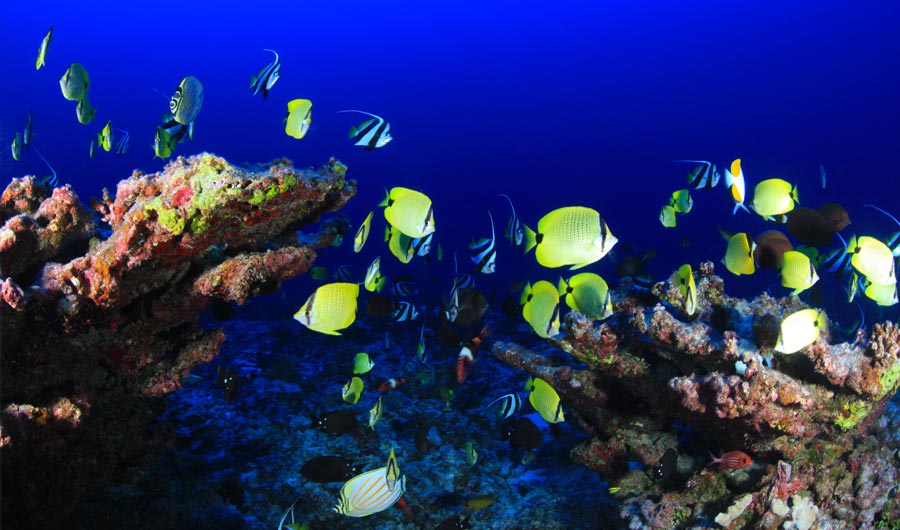 (Inside Science) -- It has long been known that the catastrophic end of the Age of Dinosaurs helped lead to the rise of the Age of Mammals. Now a new genetic study suggests it also led to the modern Age of Fishes, resulting in the extraordinary diversity of fishes now seen throughout the oceans.

The dinosaurs' 135-million-year reign came to a cataclysmic end with the end-Cretaceous mass extinction about 65 million years ago, which killed off roughly half of all the species on Earth, including many in the oceans. The flying reptiles known as pterosaurs disappeared, as well as all dinosaurs save birds. The most likely culprit was an asteroid or comet about 10 kilometers across whose impact was as powerful as 100 trillion tons of TNT, or more than 2 billion times the power of the atomic bombs that destroyed Hiroshima and Nagasaki combined.

In the wake of this disaster, a diversity of mammals and birds rapidly came to dominate the void left by dinosaurs and pterosaurs on land. But what happened in the seas?

The researchers found that five major groups of spiny-rayed fishes, or acanthomorphs, and most of the species diversity in a sixth had their origins within the first 10 million years after the end-Cretaceous mass extinction. The 18,000 species of acanthomorphs altogether constitute roughly a third of all living vertebrate species, including tunas, cods, flounders, basses, seahorses, pufferfishes and "almost all the kinds of fishes you see in coral reefs," said study co-lead author Michael Alfaro, an evolutionary biologist at the University of California, Los Angeles. Acanthomorphs are known for sharp hollow bony spines at the edges of their dorsal and anal fins, which they can extend to protect themselves from predators or retract to reduce drag while swimming.

"What's most surprising and important about these findings is the astonishing biodiversity that we see in marine fishes today bears imprints from a mass extinction event 65 million years ago," Alfaro said. "These six groups won the lottery after the mass extinction, in terms of being able to recover and diversify after the event."

"This exciting result suggests that following the mass extinction, there was effectively a burst of diversification of what went on to become the major groups we see today" among fish, said evolutionary biologist Peter Wainwright at the University of California, Davis, who did not participate in this study. "This is new, as previous studies had generally found the dates of origination to be older and not clustered in time -- the current study uses a much bigger genetic data set than any of the earlier ones."

After the end-Cretaceous mass extinction, shark and marine reptile diversity crashed, and formerly prolific sea mollusks known as ammonoids went extinct, said paleontologist Lauren Sallan at the University of Pennsylvania, who did not take part in this research. "Acanthomorphs likely took advantage of the loss of everything else to diversify into the range of incredible species we see now," she said.

There had been conflicting evidence regarding the end-Cretaceous mass extinction's impact on marine life. For decades, the extraordinary anatomical diversity seen among acanthomorphs has made it difficult for scientists to work out the evolutionary links between these fishes from the fossil record. To help unravel this mystery, Alfaro and his colleagues examined acanthomorph genes to yield insights on their family tree.

The scientists analyzed the genomes of 118 acanthomorph species, focusing on more than 1,000 DNA sequences that were highly similar across these genomes. They looked for variations in the sequences that revealed how closely or distantly related these lineages are and when they might have begun diverging from each other.

Previous genetic investigations of the acanthomorph family tree only looked at 10 to 20 genes, Alfaro said. "We're looking at data sets orders of magnitude larger than have been traditionally used," he noted.

It remains uncertain why the acanthomorphs in particular reaped the benefits of this mass extinction, Alfaro said. Perhaps the mass extinction wiped out larger species at the top of the food chain, while smaller acanthomorphs that required fewer resources to survive went on to flourish, he suggested.

Future research could sample even more fish genomes. "In the next five to 10 years, we could catch up quite a bit in terms of what we know about the evolution of fish compared to mammals and birds," Alfaro said.

The scientists detailed their findings online March 12 in the journal Nature Ecology & Evolution.