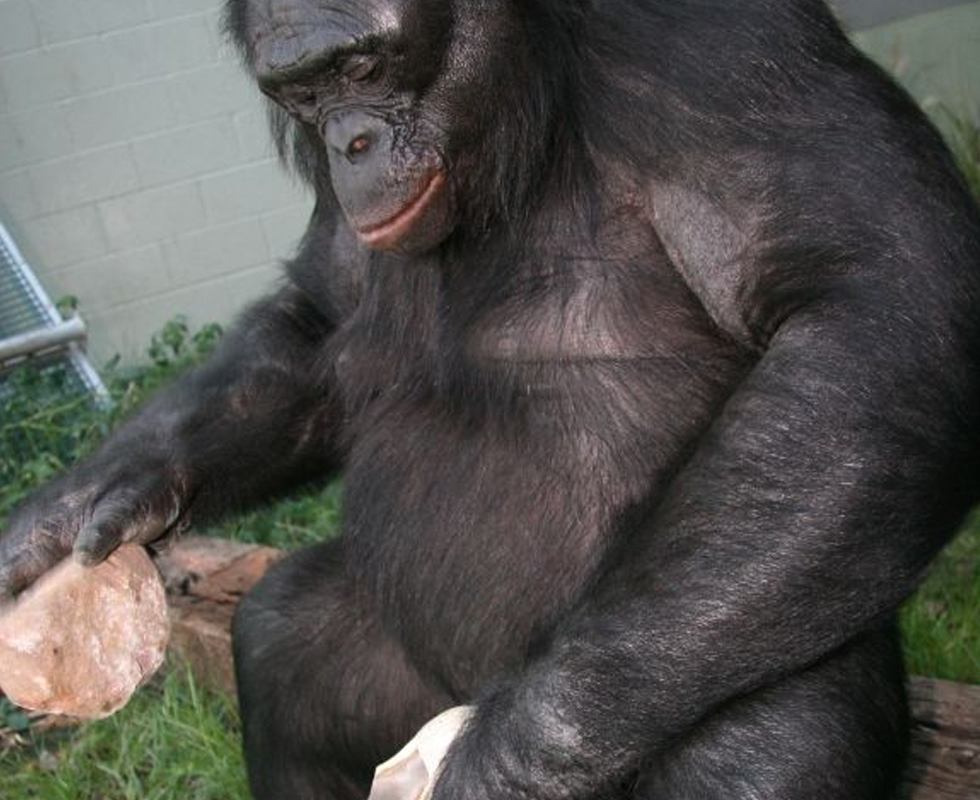 (ISNS) -- The great apes known as bonobos can make stone tools far more varied in purpose than previously known, reaching a level of technological competence formerly assigned only to the human lineage, according to researchers.

These findings may shed light on the mental capabilities of the last common ancestor of humans and these apes, scientists added.

Bonobos are, with chimpanzees, humanity's closest living relatives. Together bonobos and chimps are part of the group Pan, just as modern humans and extinct species of humans make up the group Homo.

Chimpanzees are well-known tool-users, capable of fashioning spear-like weapons from branches for hunting and using stones as hammers and anvils in the wild. Although bonobos in the wild are not known for tool use, in captivity they have shown remarkable capabilities with stone tools. For instance, in the 1990s, researchers taught the male bonobo Kanzi and the female Pan-Banisha how to knap flint -- that is, strike the rocks together to create tools -- and use the resulting stone flakes to cut rope to open a box and to cut leather to open a drum for food.

Now scientists reveal that in the intervening years, by practicing on their own, Kanzi and Pan-Banisha have developed a broader stone tool kit for more complex tasks, making them at least a match with chimpanzees in tool use.

The researchers challenged Kanzi and Pan-Banisha to break wooden logs and to dig underground, tests similar to tasks the apes might have to carry out to get food in the wild. To break the logs -- an act similar at cracking open bones to get at marrow -- the scientists not only saw these apes use rocks as hammers or projectiles to smash their targets, but also observed them either rotating stone flakes to serve as drills or use the flakes as scrapers, axes or wedges to attack slits, the weakest areas of the log. To root into hard soil, these bonobos used both unmodified rocks and a variety of handmade stone tools as shovels.

The stone tools Kanzi and Pan-Banisha created match the main categories of the first known stone tools from the ancestors of humans. Dating back roughly 2.6 million years to Ethiopia, these tools are known as the Oldowan, and include heavy-duty and light-duty items such as choppers and blades, as well as scraper-like and drill-like artifacts. Intriguingly, the marks created on the logs by the stone tools of these bonobos are very similar to those left on fossilized bones by the artifacts of early Homo.

"We anticipate that wild cultures of Pan should also exhibit such potentials and beyond," said researcher Itai Roffman, an evolutionary anthropologist at the University of Haifa in Israel.

These findings suggest humans' last common ancestor with bonobos, dating an estimated 4-7 million years ago, might also have had the mental capacity for such tool use as well, said primatologist Thibaud Gruber at the University of Zurich, who did not take part in this study.

"They use these tools for specific actions that could have been performed by our ancestors," Gruber said. "The idea here is more to find out about the cognitive abilities of our ancestors, by isolating what is common between us and our closest ape relatives. If the same ability is found in two species that share the same ancestor, as we do with the Pan species, then it is likely that the ability was already present in the common ancestor."

Gruber cautioned that Kanzi "is no ordinary bonobo. He has been having constant human contact since birth, and his cognitive abilities are not your average bonobo's."

For instance, although Roffman and his colleagues tested five other bonobos, none could create stone tools, although some did make and use wooden tools or use unmodified rocks as hammers. Also, most of the stone tools analyzed were made by Kanzi -- Pan-Banisha only manufactured a few stone tools for digging.

The fact that Kanzi used a variety of tools to break open the log sheds light on how smart bonobos can get. "That shows flexibility in the use of tools to reach a certain goal," Gruber said.

Future research can study why the five other bonobos did not create stone tools, and see if these apes could make them after interacting with Kanzi or Pan-Banisha, Gruber suggested. The idea is that how a bonobo is raised could make a difference in how successful they are at tool use.

Roffman, with Eviatar Nevo and their colleagues, detailed their findings online this week in the Proceedings of the National Academy of Sciences.

Researchers Study Violinists To Learn How Humans Act in Synchrony
Alligators May Be Able to Survive Venomous Snake Bites
New Theory Says We’ve Been Wrong About How Bubbles Pop
Crustacean Genes May Solve Debate Over How Insects Evolved to Fly
Some Beetles Survive Being Eaten, New Study Finds
END_OF_DOCUMENT_TOKEN_TO_BE_REPLACED

COVID-19 Vaccine, Sharks and Mezcal
Crabs Use Belly Sounds To Communicate
Touring The Trinity Test Site
Protests, A Retracted Paper, and a Super-Earth Planet
Why Is an Empty Shampoo Bottle So Easy To Knock Over?
END_OF_DOCUMENT_TOKEN_TO_BE_REPLACED