Cataclysmic Drought Part of the History of the Dead Sea

Drilling reveals record from a time when the Dead Sea was deader.
Image 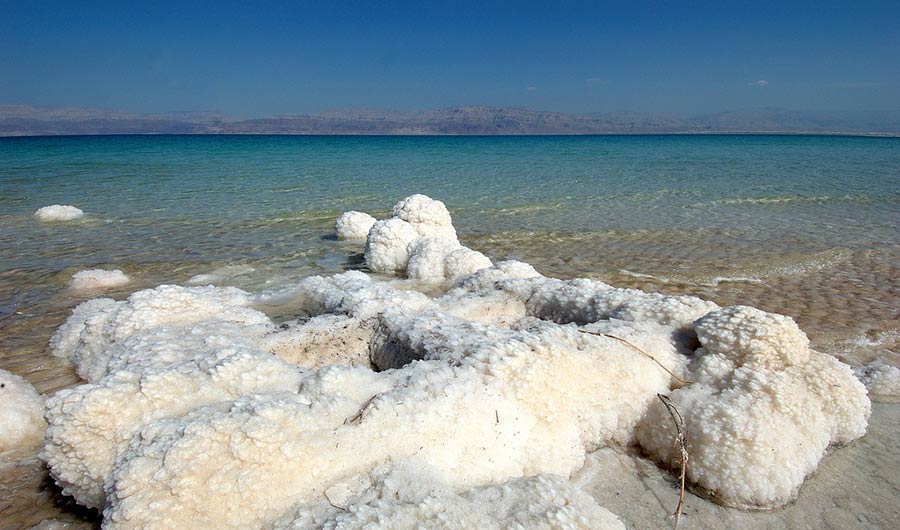 (Inside Science) -- Drilling below the floor of the Dead Sea, scientists have found evidence of cataclysmic droughts, far worse than anything ever recorded by humans -- a time when the Dead Sea was much deader.

Evidence taken from a layer of salt recorded rainfall rates of about a fifth of modern levels as recently as 6,000 years ago and another dry episode 120,000 years ago.

The scientists from six nations, who drilled for forty days and forty nights, reached 1,500 feet deep into the sea bed and into the beach.

About halfway down, drill samples showed layers of salt 300 feet thick from the time between ice ages. Mud had washed into the sea when the climate was wet. The crystalized salt precipitated out when it was dry and water receded.

The change in temperatures and weather patterns happened because of variations in the Earth’s orbit, according to Yael Kiro, associate research scientist at Columbia University's Lamont-Doherty Earth Observatory, located in Palisades, New York. The paper was published in the journal Earth and Planetary Science Letters. Atmospheric temperatures during the super droughts were 4 degrees warmer than they are now. Then the ice age brought more rain and cooler temperatures to the area and the lake that would become the Dead Sea, filled with sweet water.

Measuring tiny air bubbles in the salt enabled the researchers to extrapolate rainfall and runoff and showed a decline in precipitation far worse than anything observed now.

For decades or even centuries the amount of rain that fell upon the sea was about 20 percent of the amount that falls currently. The researchers think a change in weather patterns that normally brought storms in from the Mediterranean was responsible for the severe drought.

Today, the Dead Sea is 42 miles long and 11 miles wide and shrinking. It borders on Israel, Jordan and the Palestinian territories.

At 1,300 feet below sea level, the beach is the lowest point on earth not covered with water. The sea water itself reaches around a thousand feet deep -- depending on when and where the measurement is taken -- and is about 35 percent salt, almost 10 times saltier than the ocean.

The water is so thick floating is nearly effortless. People read books while bobbing on the surface. Fresh water showers are in place so swimmers can wash off the salt. Occasionally a rain storm will put a layer of fresh water on the surface, Kiro said, but it soon evaporates.

The source of most of the water is the Sea of Galilee, by way of the Jordan River. There is no outlet to an ocean.

The Jordan was once 10 times bigger than it is now, said Daniel Kurtzman, a hydrologist at the Volcani Center in Bet-Dagan, Israel. The Dead Sea needs 800 million cubic meters of water a year to stay stable. It is getting an eighth of that now.

Yet, the Dead Sea isn’t totally dead. Divers exploring the bottom of the sea have found underwater springs that spout fresh water and some forms of hardy bacteria life. Otherwise it is too salty.

The area is alive with history. The biblical David hid there from King Saul. Even in biblical times the Dead Sea was referred to in Hebrew as Yam ha-Melah, or Sea of Salt.

Herod the Great built a fortress and palace at Masada, a flat-topped hill nearby. In A.D. 73, during the Jewish wars against Roman occupation, a band of around 1,000 Jewish zealots, the Sicarii, were besieged by the Tenth Roman legion and eventually, according to the Jewish-Roman historian Flavius Josephus, committed mass suicide to avoid capture. Ruins of the fortress and the ramp the Roman army built to finally assault the fortress are now major tourist attractions. Some officers in the Israel Defense Forces take their military oaths on Masada.

A mile from the sea, on the Jordanian side, a shepherd boy found the first of the Dead Sea Scrolls in a cave in 1948.

Hotels line the shore. The water is alleged to have curative powers and cosmetic firms sell lotions with Dead Sea salt.

Josephus also recorded a major earthquake in the area, and Uri ten Brink, a geophysicist at Woods Hole Science Center of the U.S. Geological Survey in Massachusetts, said the sea is on a fault in the Middle Eastern tectonic plate, called the Dead Sea Transform, that runs from Turkey to the Red Sea and separated Arabia from Africa about 17 million years ago.

“Both Africa and Arabia are moving north,” ten Brink said, “but Arabia is moving slightly faster.”

The sea water level currently is dropping 4 feet a year. Additionally, the whole valley, including the seabed, also is dropping, said ten Brink.

The cause of the decline in water level, besides drier weather and climate change, is the growing population in the area.

Between the people in the area drawing water for drinking and agriculture, and evaporation, more water is being taken from the system than is coming into it.

The solution, Kiro said, was to desalinate water from the Mediterranean Sea and pump it into the Sea of Galilee and then let it flow into the Jordan. Plans are underway in both Jordan and Israel to do that, but politics could intervene.