Analysis of dinosaur fossils showed that some parents warmed their eggs with body heat.
Image 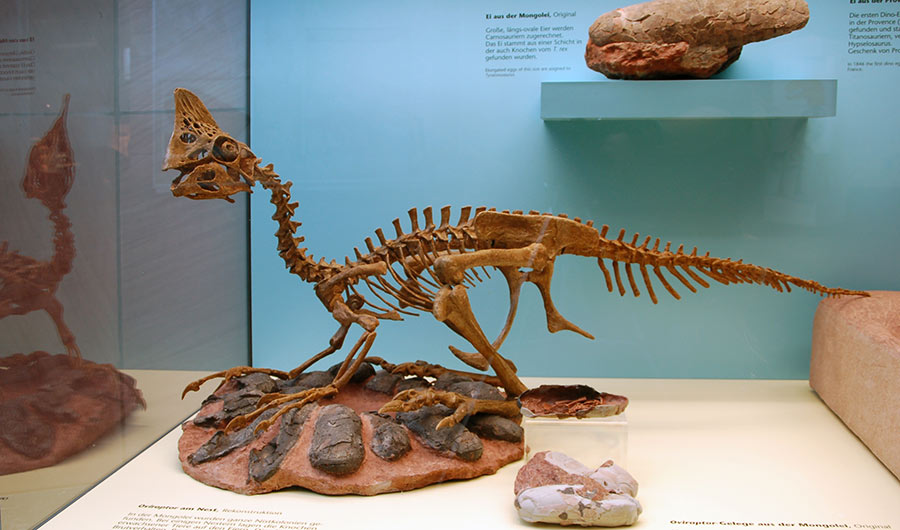 (Inside Science) -- It’s hard to think of dinosaurs as being loving, caring parents, but scientists have found some of them may have been just that. Take the oviraptorosaurs, a group of feathered creatures that look as if they were constructed by a malignant committee from spare bird parts.

By studying fossilized oviraptorosaur eggs, researchers from France and China have found that oviraptorosaurs lay across those eggs in nests and warmed them with body heat just as modern birds do. Paleontologists had previously theorized that oviraptorosaurs incubated their eggs, but the French-Chinese team came up with the numbers. They also added to the theory that at least some dinosaurs were warm-blooded reptiles.

The scientists measured the ratio of isotopes of oxygen -- forms of the element with different numbers of neutrons -- that the fossilized embryos had absorbed into their bones from the environment, according to Romain Amiot, a paleontologist at the geology laboratory of the University of Lyon in France. The isotopes decayed at different rates depending on the temperature at the time the bones were formed.

They calculated that the dinosaurs kept the eggs at temperatures between 95-104 degrees Fahrenheit, close to the temperatures modern birds use to incubate eggs. Modern chickens keep their eggs at 99.5 F.

Oviraptorosaur fossils have been found all over the world. The eggs studied in the experiment, documented in a recent issue of the journal Palaeontology, are Chinese in origin. Amiot said he did not know which of the 40 species of oviraptorosaurs laid the eggs.

Some oviraptorosaurs have been found stretched across a nest of eggs, according to Matthew Lammana, assistant curator at the Carnegie Museum of Natural History in Pittsburgh. It was assumed those dinosaurs died trying to pillage the nests of other dinosaurs for food, so they were given the name "oviraptorosaur," or “egg thief.”

Now, it seems they may have died trying to protect their own eggs.

There is no scientific way of guessing how cute baby oviraptorosaurs might have been, but their mothers were surely not. The oviraptorosaur group ranged in size from that of a chicken to a ton and a half. Most were small to medium in size, Amiot said, but one species, called a gigantoraptor, was about the size of a small house.

The big ones couldn’t lay on eggs without breaking them, but they may have laid the eggs in piles of dirt and let decomposition of the vegetable matter provide the heat.

The oviraptorosaurs were feathered, some brightly colored, with parrotlike beaks and bony crests on their heads. They appeared to use their feathers for display. They typically had short tails, thick at the base, and strong arms instead of wings, with long claws at the end. The feathers may have been long enough to cover the nests and eggs. An oviraptorosaur at the Carnegie Museum had sockets for a wishbone, just like a bird.

They were bipedal, had long legs, and apparently could move fast.

Think of a large, brightly colored Australian flightless cassowary with long, deadly talons, Lamanna said. No one is sure what they ate, but presumably it was whatever they wanted to. Some have been found with small animals in their stomachs, others with shellfish.

One species acquired the nickname Chicken from Hell because it was found first in a rock formation in South Dakota called the Hell Creek formation, and in part because of how it looked.

Oviraptorosaurs survived longer than almost any other group of dinosaurs, treading the Earth from about 130 million years ago to the end of the Age of Dinosaurs in the Cretaceous period 65 million years ago. They were probably around when whatever killed off the dinosaurs struck, Lamanna said.

They lived all over the world, from just below the Arctic Circle to near the South Pole.

Most paleontologists think that while the oviraptorosaurs may have shared a common ancestor with birds, they themselves are not the ancestors of birds.

“They are as close as you can get to being a bird without actually being a bird,” Lamanna said.