Researchers discover that enzymes can be used to ward off the effects of damaging nerve agents.
Image 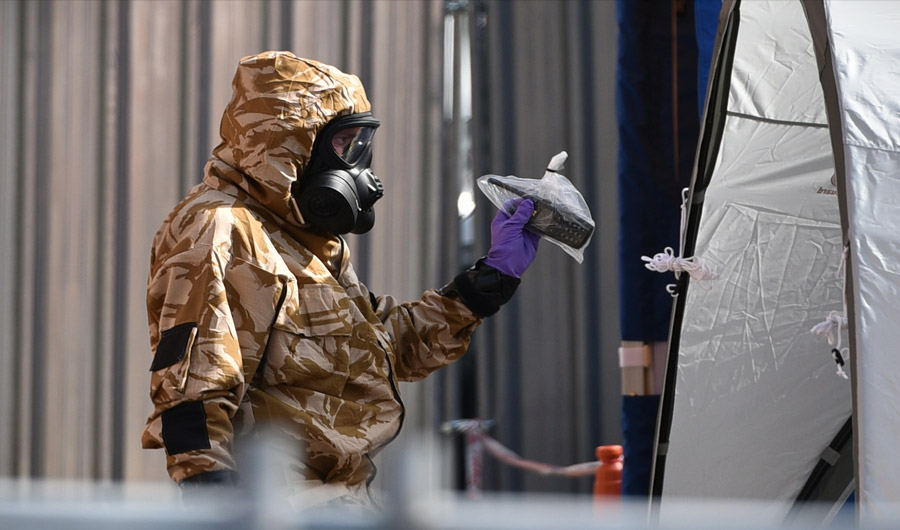 An army officer in Salisbury, U.K. on July 6, 2018, during an investigation into nerve agent poisonings.

(Inside Science) -- It’s the stuff of spy novels: Scientists are working to create a salve that could help protect people against the devastating -- and often lethal -- effects of chemical weapons like VX, Novichok and sarin, all of which can be absorbed through the skin or inhaled.

In a presentation at today's American Chemical Society Meeting in Boston, Massachusetts, chemist Ayusman Sen from Pennsylvania State University plans to explain that enzymes could largely counteract the effects of these noxious nerve agents. These miniscule devices have the potential to simultaneously neutralize the toxins and release a powerful antidote.

“In your body, everything is powered by chemical reactions, which release energy,” said Sen. The energy that’s created during the decomposition of the nerve agent is converted into a mechanical force that can be used to pump fluid. By sticking enzymes to an immobile surface -- in this case, embedding them in a gel or ointment – that mechanical force can be focused in different directions, and, say, flush an antidote out toward the skin. What’s more? The first enzymes that become exposed to the nerve agent activate nearby enzymes. In short, it kickstarts a feedback loop.

The most commonly used chemical weapons are nerve agents, which jolt the central nervous system. If not quickly treated with an antidote, most victims experience muscle spasms, loss of bodily fluids and eventually become paralyzed. The body rapidly shuts down; most suffocate or succumb to cardiac arrest. “Nerve agents overstimulate the neurons and overstimulate muscle cells,” said Mark Bishop, a chemical weapons expert at the Middlebury Institute of International Studies in Monterey, California, who was not affiliated with the research. The agents excite the neurotransmitter, acetylcholine, which is responsible for sending electric signals that stimulate muscle receptors throughout the body. When acetylcholine compounds flood the receptors, muscles begin to convulse.

These deadly agents have been used to attack both small and large groups.

In March, former Russian military officer and U.K intelligence agent Sergei Skripal and his daughter, Yulia, were poisoned in Salisbury, England. They were both hospitalized but eventually released. A police officer fell ill and recovered, and in July, two Amesbury, England, residents who were exposed to remnants of the chemical used to poison the Skripals fell ill; one has since died and the other now has vision problems. In 2017, another type of nerve agent known as VX was used to assassinate Kim Jong Nam, the half-brother of North Korean leader Kim Jong Un.

In 1994, members of the Japanese cult Aum Shinrikyo used sarin gas to carry out in an attack in Matsutmoto, Japan, that killed eight, and wounded nearly 600. The next year, the same group used sarin in an attack on a subway train in Tokyo. Twelve people were killed, and thousands were injured.

According to the Independent International Commission of Inquiry on the Syrian Arab Republic, there have been 34 confirmed instances where chemical weapons such as sarin gas have been used by the Syrian government and its affiliates to poison civilian targets in the past five years, which the government denies. A report from the Human Rights Watch suggests there have been up to 85 attacks.

Sen and his team hope that applying the ointment directly to exposed skin could protect members of the military, first responders, and civilians in warzones who are most at risk of exposure.

But there’s still a lot of work to be done. Though the enzyme compound would be effective against liquid nerve agents, it is unclear how effective the treatment is against nerve agents which are inhaled. It’s also unclear how much of it would need to be applied. Bishop questions whether absorption of the antidote is the most effective means of transport. Currently, the antidote, a mixture of medicines called atropine and 2-PAM, is injected.

According to Sen, there are other applications for the technology, too. He's particularly interested in testing out the method's usefulness in combating diabetes. The enzymes, he suggested, could be used as an in situ insulin pump that could be implanted in the body. It would be used to measure glucose levels in the blood and diffuse insulin into the blood based on how much glucose has been detected. They’re still developing the concept, and the insulin reservoirs would have to be periodically refilled, but Sen is confident that using these enzymes could be a step forward.

“In principle, nature has a vast array of enzymes that work on all kinds of things," Sen said.

“The beauty of it is that they are self-powered, and they do not need an external power source. They can lie dormant for a long time, and then they can kick on when the target is sensed.”

Samuel Sanchez, a chemist at the Institute for Bioengineering of Catalonia in Barcelona, Spain, finds the use of enzymes in nanotechnology promising: “They're versatile and efficient and also abundant in nature, which is important.”