Researchers create a 10-qubit register that can hold its quantum state for more than a minute.
Image 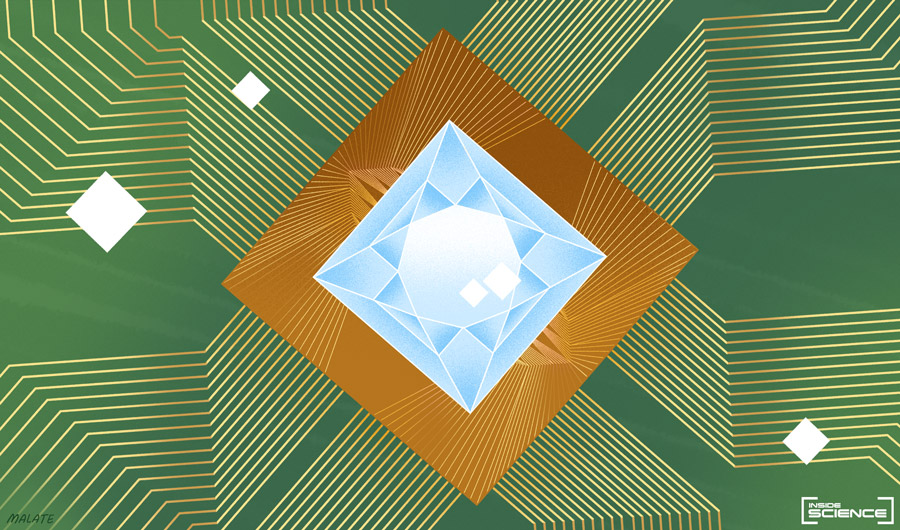 “Quantum states are very fragile. They can be lost very easily, and you can't copy them,” said Conor Bradley, a physicist from Delft University of Technology in the Netherlands, who is a member of the team. “One of the goals for our quantum bits is that they can retain a property called coherence for a long time.”

The team used lasers, along with carefully applied microwaves and radio-frequency fields, to interact with the nitrogen atom, a loose electron floating in the empty site, and the eight nearby carbon-13 atoms, to create the 10-qubit quantum device. Qubits, or quantum bits, are the basic unit in quantum systems, analogous to a classical binary bit in classical computers.

The quantum property called superposition allows a qubit to be in two states simultaneously, as opposed to being either 1 or 0, like a classical bit. That, together with other quantum phenomenon such as entanglement -- which links the quantum states of two qubits -- enables a quantum computer to work in a way fundamentally different from a classical computer. If a quantum computer has enough qubits that are stable for long enough, it can theoretically tackle certain problems that are difficult or impossible for ordinary computers to solve.

While using flawed crystals for storing quantum information is not a new concept, the 10-qubit system is the largest qubit-register of its kind. The researchers were also able to generate entanglement between all 45 possible qubit pairs among the 10 qubits, an achievement relevant to many quantum network applications.

The quantum memory can retain a single qubit state for over 75 seconds, a task akin to holding the state in memory. It can also maintain a two-qubit entanglement for over 10 seconds, which is necessary for the device to function like a processor and perform certain calculations. The researchers published the results in a recent paper in the journal Physical Review X.

While a long coherence time is important, it is not the only objective that researchers must strive for when designing quantum systems.

“Comparing different systems is usually a bit tricky and can upset people because there are other things that matter,” said Bradley. “There are other systems that are very good at what they do.”

For example, quantum systems that use superconducting circuitries, which companies such as Google and IBM are developing, are generally more configurable -- since they are not literally set in stone like diamond memories are. But they are usually bulkier and have shorter coherence times. The ability for diamond qubits to interact with light also makes them more suitable for certain applications such as long-range quantum communications, which are mostly done using lasers.

The potential for diamonds to be used in quantum computers has prompted scientists to try to grow the perfectly flawed diamond, building it atom by atom with holes and defects located exactly where they should be, instead of leaving it up to nature and chance.

“People are trying to make those defects deterministically,” said Johannes Majer, a quantum information expert from the University of Science and Technology of China in Shanghai. “It’s actually a lot of material science.”