Research findings give credence to theory that airplane contrails might alter weather on the ground. 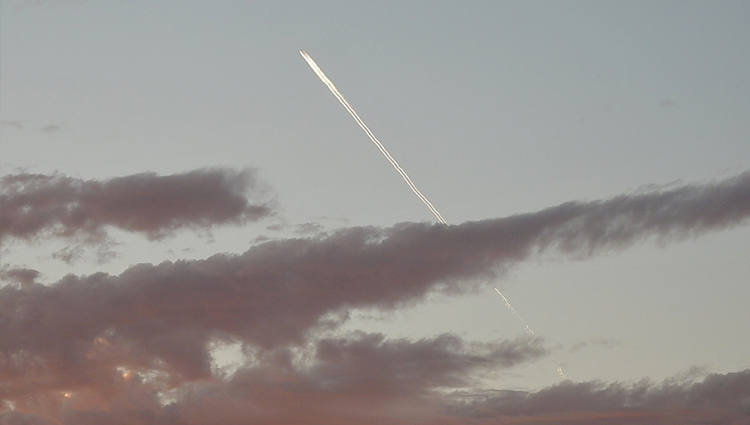 (Inside Science) -- On May 11, 1944, a warm and cloudless spring day, U.S. Army Air Force B-24 Liberators, B-17 Flying Fortresses and their fighter escorts lifted off from airfields across southeast England. They climbed, circled, and then formed into one huge formation before heading out to bomb targets in Nazi-occupied Europe.

The bombers and hundreds of fighters flying escort, forming two missions four hours apart, filled the sky with contrails. Researchers from Lancaster University and the Environmental Agency in the U.K. combed through military and meteorological records and determined that the vast cloud cover created by aircraft condensation trails -- or contrails -- slowed the rise of temperatures on the ground that morning.

The research gives some credence to the theory that contrails in the sky might alter the weather below.

According to B-17 navigator Marshall Stelzriede's journal, the sight from the air was just as awesome as the view from below.

"It is difficult to imagine, without actually seeing it, what the sky looked like with 700 to 800 B-17s and B-24s in the air, particularly when each plane produced its own condensation trail under certain atmospheric conditions," Stelzriede wrote.

Contrails are produced when hot moist air from engine exhausts hit colder air in the atmosphere. Most dissipate quickly, but some stay as long tails marking the path of the plane. In wartime, pilots tried to avoid making contrails over bombing targets because they made it easier for enemy aircraft to track their planes.

"The classic conditions for contrails is just ahead of a warm front," said Rob MacKenzie one of the Lancaster researchers now at the University of Birmingham. "To get really persistent cloudiness due to aircraft you really need to be flying the aircraft through air that is ready to form a cloud, supersaturated."

Essentially, the contrails trigger clouds. The long trails are made up of moisture from the air, not the exhaust, MacKenzie said.

The idea that contrails affect weather is not entirely new. After the attacks on Washington, D.C. and New York on 9/11, American skies were clear of all aircraft for three days. Researchers reported a 2 degree Fahrenheit change in the variation between high and low temperatures -- which disappeared when commercial flights resumed.

But that conclusion is controversial.

MacKenzie, Roger Timmis, and Annette Ryan at Lancaster, working with the Royal Air Force Museum at Hendon, went back through the records from 1943 to the war's end in 1945. With the help of the museum staff, they were able to center on the May 11 raid. From pilot briefings, they found the planes in the morning mission produced contrails when they reached 12,000-15,000 feet, relatively low, so they concentrated on that mission. There were no missions the next few days and the weather did not change notably, providing something of a control.

The morning squadron was enormous, 363 B-24s and 536 fighters in escort. The target was marshalling yards in France, places where the Germans assembled troops. All or most of the planes produced contrails.

The research was reported in the International Journal of Climatology.

David Travis of the University of Wisconsin-Whitewater, who authored the study detailing how the clear skies after 9/11 cooled temperatures, said the Lancaster report is the first to give some empirical support to his theory.

How much the Lancaster study adds to the debate, Travis said, is unclear because the contrails of modern jets are much higher than those studied by the Lancaster group and the warming-cooling dynamics may be different. What it does hint at is that contrails can alter local weather.