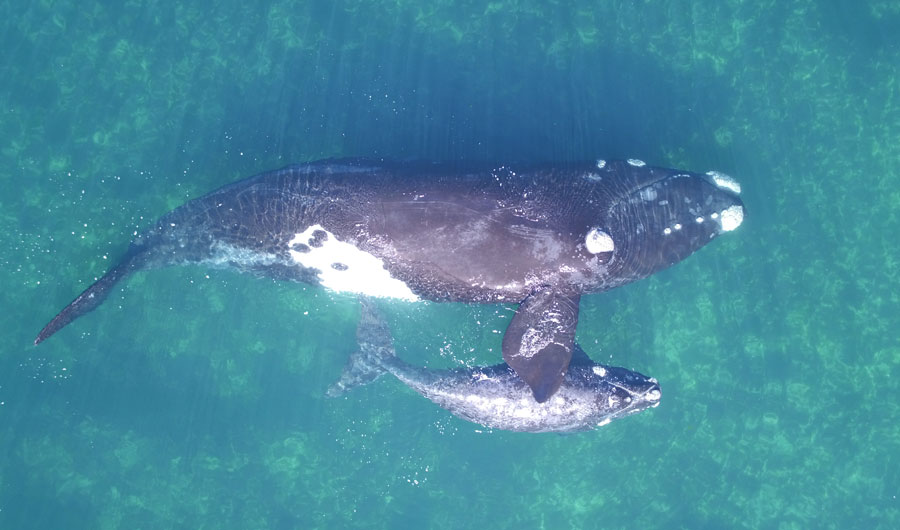 (Inside Science) -- Old whaling records and cutting edge drone technology are coming together to give researchers a new way to estimate body volume and mass of some of the largest animals on the planet.

“Body mass is a very important variable in whales because it dictates a lot -- for example, how much energy an animal uses, or how much prey they need to consume,” said  Fredrik Christiansen, an animal physiologist at the Aarhus University in Denmark and the lead author of a study published today in the journal Methods in Ecology and Evolution.

Weighing such large sea creatures without killing them is extremely difficult -- most of our knowledge comes either from beached whales or the records from whaling operations. Christiansen and his colleagues wanted to see if they could create a reliable, remote method to weigh whales.

They took quadcopter drones (the ones that fly using four small helicopter propellers) out near the Valdes Peninsula in Argentina and captured photos and footage of southern right whales.

“They are in this area for a long time and a lot them are mating and playing around in the water,” Christiansen said.

Since the scientists knew the altitude of the drone camera and the size of the lens, they could use basic trigonometry to convert pixels to meters and learn the basic shape and size of whales -- in other words, turn a 2D picture into a 3D model. They then compared these dimensions with records of northern right whales hunted in old whaling operations, as the two species are quite similar. Since these records also listed the weights of the animals, it allowed researchers to get a good estimate of the weight of the whales they photographed.

Christiansen said that the information could help scientists get better estimates of whether there is enough krill or fish available for whales to bulk back up after long migrations.

Conservationists could also use the weight estimates. Northern right whales often get tangled up in crab pot lines along the coast of the northeastern United States. It’s hard to free these whales without sedating them, but too much sedative could knock the animals out and lead to their drowning. Being able to estimate the weight of a whale could help rescuers know the right amount of sedative to calm the animal without putting it to sleep.

Christiansen said he’s also now combing whaling records for data on the weight and dimensions of other species, to broaden the application of the technique.

Severe Marine Heat Waves Linked to Human-Caused Warming
Infographic: How a Geiger Counter Works
Tumors Under Physical Stress Inside the Body May Not Respond as Well to Chemotherapy
This Long-Tailed Bird Makes Sounds With Its Feathers in Different Accents
Jeweled Orb-Web Spiders Mimic Flowers to Catch Pollinating Insects
END_OF_DOCUMENT_TOKEN_TO_BE_REPLACED