Exploring The Depths Of The Solar System

Observations of the region beyond the planet Neptune are giving astronomers fresh understanding of our solar system's history – and may reveal a new planet.
Image 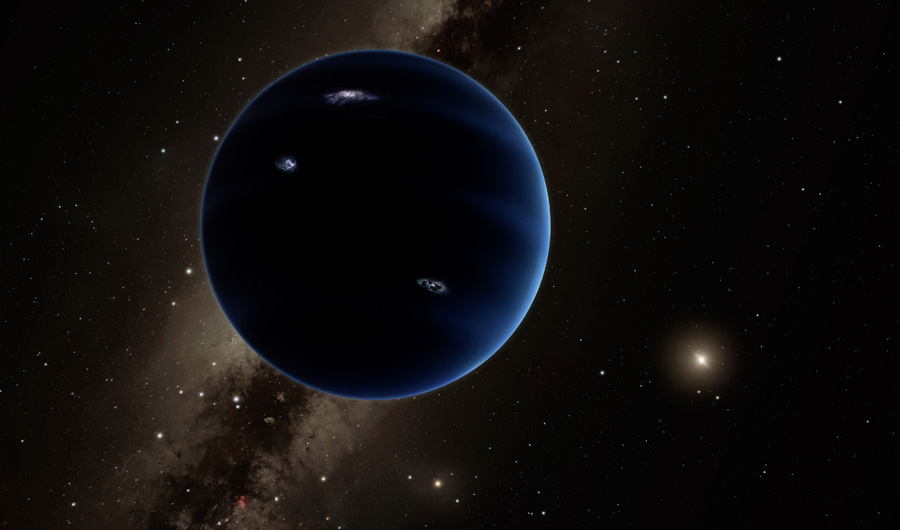 A view from the hypothesized Planet Nine looking back towards the sun. The planet is thought to be similar in composition to Uranus and Neptune.

(Inside Science) – Astronomers used to think that just one substantial object existed in the vast region of the solar system beyond the orbit of the giant planet Neptune: Pluto. Once regarded as a full-fledged planet, Pluto was officially downgraded to a dwarf planet as of August 2006.

In the past quarter-century, telescopes on Earth and aboard spacecraft have revealed three other dwarf planets beyond Neptune, evidence for perhaps hundreds more, thousands of comets, and large numbers of other bodies in the region called the Kuiper belt.

"The Kuiper belt is the second – and much larger – asteroid belt," explained Simon Porter, a postgraduate astronomer at the Southwest Research Institute in Boulder, Colorado.

Like the asteroid belt that dwells mostly between the orbits of Mars and Jupiter, the Kuiper belt teems with inhabitants.

"There are maybe 100,000 objects more than 100 kilometers across, and maybe a billion a kilometer across," said David Jewitt.

As a professor of physics at the University of California, Los Angeles, Jewitt discovered the first such Kuiper Belt Object (KBO) in 1992 with Jane Luu, a graduate student at the time.

The search for KBOs has continued at an increasing pace since then. This year has been particularly fertile.

"The rate of discovery of KBOs is not constant," said Gareth Williams, associate director of the Harvard-Smithsonian Center for Astrophysics' Minor Planet Center in Cambridge, Massachusetts. But 2016 "has seen a large number of discoveries by two teams scouring data from Pan-STARRS," an optical telescope atop Hawaii's Mount Haleakala with a wide field of view.

In February, for example, astronomers using that instrument found evidence of a possible new dwarf planet. Called 2015 RR245, it takes about 700 Earth years to swing once around the Sun.

Within the Kuiper belt itself, meanwhile, the New Horizons spacecraft that flew by Pluto 13 months ago has continued to study the region and its inhabitants. "We've already looked at half a dozen KBOs," said John Spencer of the Southwest Research Institute who is a member of the New Horizons team.

Last month NASA agreed to schedule the spacecraft's fly-by of a strange KBO known as 2014 MU69 around New Year's Eve 2018.

Quest for "a needle in a haystack"

Astronomers hope that future observations in the Kuiper belt will yield a bonus: the discovery of an unseen giant planet. Studies of the movements of certain KBOs strongly indicate that such a body travels around the Sun far beyond Neptune's orbit.

The quest to spot the planet "is a needle in a haystack situation in which we believe the needle is there," said Scott Sheppard of the Carnegie Institution for Science in Washington, D.C. "It would blow people's minds if we find it."

Even before that, observations of the Kuiper Belt have begun to rewrite the history of our Sun's neighborhood.

"They have forced a change in the way we think about the solar system," Jewitt said. "It's not a giant clock with the planets going round in an orderly way that's somewhat boring, as we thought."

Rather, he continued, the Kuiper belt has shown us the importance of radial migration – that is, the movement of objects away from the Sun.

Observations have shown that Neptune strongly influences a particular group of KBOs, dubbed resonant objects. These typically orbit twice around the Sun for every three orbits of Neptune. Astronomical models that account for this effect envision Neptune's influencing the KBOs as its path around the Sun drifted.

"The only way to explain it is that Neptune's orbit has expanded," Jewitt explained. "That raises the possibility that the solar system started with planets in quite different positions than they have now."

The overall understanding of the Kuiper belt rests on series of wide-field images of different parts of the sky.

"We take several pictures in a row and compare them to see if anything moved," Jewitt noted. Unlike stars, KBOs appear to move against the background of space as time passes.

The amount of a KBO's movement in successive images indicates its speed in orbit, and hence its distance from the Sun.

Once astronomers have identified a KBO, they determine its shape and size – and the possibility that it is surrounded by rings – through further repeated measurements to identify subtle changes in the light it emits.

The arrow in this image, captured by the New Horizons spacecraft in April of 2016, shows the movement of a Kuiper Belt Object known as 1994 JR1,which orbits more than 3 billion miles from the sun.

Improvements in the ability of charge-coupled devices to capture light from dim objects have facilitated that work. These devices use the same technology within digital cameras and smartphones to capture light.

"When we started our search, our [charge-coupled device] cameras were pathetically small," Jewitt said. "They're basically close to perfect now."

The technology for interpreting images has also improved. They've automated the once manual task of scanning computer screens to detect changes in the KBOs' movements.

In addition to images provided by Earthbound and orbiting telescopes, astronomers can now use images from the New Horizons spacecraft to gain an insider's view of the Kuiper belt.

In 2018, the craft will study a dense swarm of objects 44 times further from the Sun than our Earth.

However, he said, "the pièce de résistance is that we'll come close to 2014 MU69. We'll be close enough to see great detail of its craters and fractures, map its composition and color, and look for gas and dust."

Even now, Porter said, "we've only been able to observe it from the Hubble Space Telescope. It's too faint to detect from the ground."

NASA chose to fly by 2014 MU69, Spencer said, "because it required the least amount of fuel." After that pass, they will then train New Horizons' cameras on other objects in the Kuiper Belt, Porter said.

Evidence for a (real) ninth planet

Probably the most intriguing Kuiper belt venture, however, is the search for the so-called ninth planet.

Pluto once seemed to fill that job description. Astronomers predicted the existence of a planet beyond Neptune in the early 20th century, based on apparent irregularities in the orbits of known planets.

But soon after American astronomer Clyde Tombaugh identified Pluto in 1930, experts realized that it didn't fulfill the necessary conditions. Not only was it far too small to account for other planets' orbital irregularities, its own orbit, which carried it inside Neptune's for part of its journey around the Sun, was too eccentric – highly elliptical rather than circular.

Then in the 1990s, precise measurements of Neptune's weight revised the calculations that had led to Pluto's accidental discovery. The solar system, as planetary astronomers understood it then, didn't need a ninth planet.

The discovery of KBOs changed all that.

It resuscitated the need for a large ninth planet – but this time one far beyond the orbit and influence of Neptune. The astronomical community could not have envisioned that need before the discoveries of significant numbers of KBOs.

The issue emerged when astronomers focused on a group of "extreme" KBOs.

These differ from other KBOs because Neptune and the other established giant planets have no apparent influence on their movements. They include Sedna, a large KBO with an extremely elongated orbit discovered in 2003, and a similar body called 2012 VP113 (and nicknamed Biden). Both have orbits even more eccentric than Pluto's.

"We noticed that several extreme KBOs have similar types of orbits. That was completely unexpected and not random," Sheppard recalled. "That suggested that something – an unknown giant planet – is shepherding them into similar orbits."

In 2014, Sheppard and Chad Trujillo of the Gemini Observatory in Hawaii performed simulations based on a cluster of a dozen extreme objects, including Sedna and Biden.

Their calculations suggested that a planet between five and 15 times our Earth's size that orbits between 200 and 1,000 times further from Sun than our home planet could account for the clustering.

Early this year California Institute of Technology astronomer Michael Brown, who discovered Sedna and the dwarf planet Eris, and his associate Konstantin Batygin built on that research to determine a rudimentary orbit for the purported planet.

Astronomers started to look for the planet using several ground-based telescopes and the Cassini spacecraft in orbit around Saturn.

So far, they haven't found it.

What that means, Sheppard said, is that the planet is probably in the part of is orbit most distant from the Sun.

"It spends the vast majority of its time in that distant state," he pointed out.

Nevertheless, the calculations seem to favor the planet's existence.

Jewitt used an old scientific saw to summarize the attitude of the astronomical community toward the possibility of finding the predicted planet.

"Models may come and go," he said. "But an observation lasts forever."