Google's New Quantum Computer May Be Best Of Both Worlds 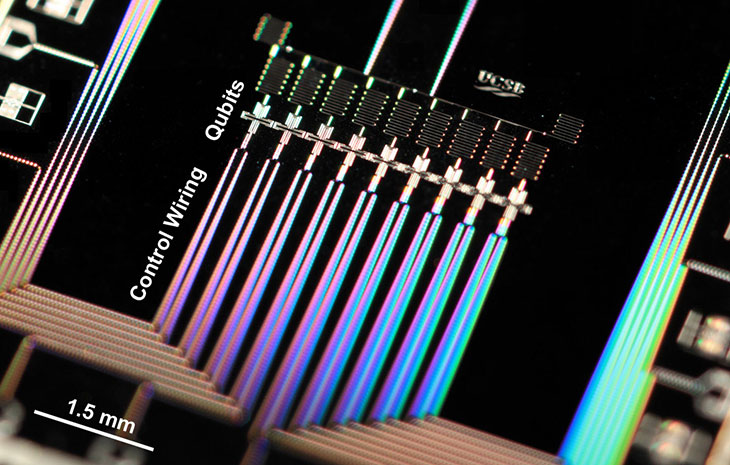 The new quantum computer from Google.

(Inside Science) -- Quantum computers can in theory solve problems it would take regular digital computers longer than the age of the universe to crack. Now scientists at Google and their colleagues have developed a machine that combines the two major approaches to quantum computing into one, work that might help researchers build quantum computers that can outclass conventional computers.

Whereas digital computers represent data as ones and zeroes -- binary digits known as bits represented by flicking tiny switch-like transistors either on or off -- quantum computers use quantum bits, or qubits that are both on and off at the same time. This enables them to each carry out two calculations at once. The number of calculations that quantum computers can run rises exponentially with the number of qubits they have -- two qubits allow four calculations simultaneously, three allow eight, four allow 16, and so on.

Quantum computers rely on how the universe becomes fuzzy and surreal at its very smallest levels. Quantum physics, the best explanation yet for how all known particles behave, suggests that atoms and the other construction blocks of the universe are capable of seemingly existing in two or more places at once or spinning in opposite directions at the same time, fragile paradoxical states known as superpositions.

Previous research found that a quantum computer with 300 qubits could perform more calculations in an instant than there are atoms in the universe. This suggests that quantum computers might be able to solve classically intractable problems, ones that would take regular computers thousands or even billions of years.

There are currently two main approaches toward quantum computation. Standard quantum computers follow what is known as the gate model, which links qubits up into simple circuits known as quantum logic gates that can each perform a basic operation. To carry out a calculation, one tunes each qubit to a given setting to encode the elements of the problem at hand, much as a digital computer might encode a number as a bit or collection of bits. One then manipulates these qubits step by step with a sequence of quantum logic gates called a quantum algorithm, and then scans the system to get the answer.

In contrast, the commercially available quantum computers that currently exist practice a strategy known as adiabatic quantum computing. In this approach, one starts off with a set of noninteracting qubits that are kept at their lowest energy state, called the ground state. One then carefully evolves this system into a set of qubits whose interactions at its ground state represent the correct answer for the specific problem that the researchers encoded it to solve.

The appeal of adiabatic quantum computing lies not only in its simplicity, but also in its versatility. Standard quantum computers use algorithms that each only solve a very specific problem, such as cracking encryption, whereas adiabatic quantum computers can in theory solve any kind of problem, said study lead author Rami Barends, a physicist at Google. Previous research suggests that adiabatic quantum computers are especially good at optimization problems, which involve finding the best solution from all feasible solutions, such as the shortest route connecting multiple destinations, or the most stable form of molecules -- the former problem could help Mars rovers better explore the red planet, while the latter could lead to better drugs or catalysts.

"Connecting one qubit to any other becomes really challenging," Barends said.

The Google-led project combines the advantages of both the main forms of quantum computing by using a standard quantum computer to simulate an adiabatic quantum computer. The hope is that larger-scale versions of this machine one day may "solve complex problems in nature, from physics to chemistry and biology," Barends said.

"That this is possible in principle has been known for more than a decade, but an experimental demonstration has been lacking," said Daniel Lidar, director of the University of Southern California's Center for Quantum Information Science and Technology in Los Angeles, who did not take part in this research.

The new machine consists of up to nine qubits and up to more than 1,000 quantum logic gates. Each qubit consists of a superconducting cross-shaped structure made of aluminum film deposited on sapphire, and the nine qubits are all lined up in a row. Each qubit resonates at a specific frequency, and by tuning qubit frequencies to or away from each other, interactions between qubits can be turned on or off.

To simulate adiabatic quantum computing, Barends and his colleagues had the system evolve over the course of many tiny steps in time. In experiments, the simulations could implement the kind of interactions between qubits needed to solve classically intractable problems, something not possible with present-day adiabatic quantum computers, Barends said.

"This work demonstrates key building blocks for implementing a digital emulation of adiabatic quantum computing in a superconducting qubit system," said experimental physicist and electrical engineer William Oliver at the Massachusetts Institute of Technology in Cambridge, who did not participate in this study.

"In the very short term -- that is, with devices of fewer than 40 qubits -- the main interest is in understanding sources of errors," Lidar said.

However, "in a couple of years, it may be possible to work with devices having more than 40 qubits," Lidar said. That point may mark "the achievement of 'quantum supremacy,'" Lidar said -- when quantum computers outclass regular computers.

The researchers detailed their findings in the June 9 issue of the journal Nature.