Hottest Temperature In The Universe Measured

Hottest Temperature In The Universe Measured 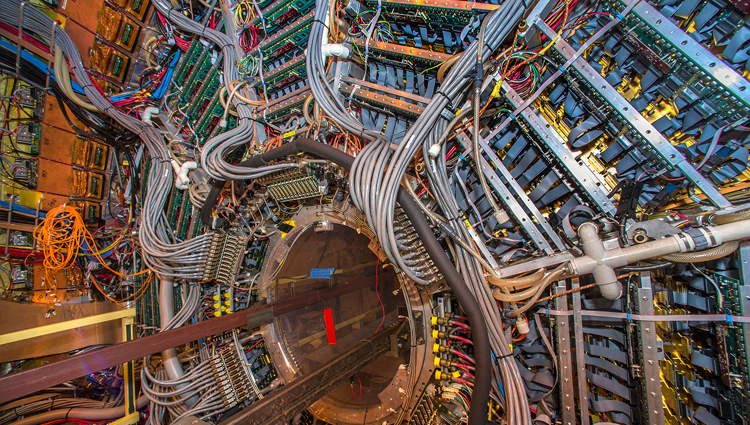 WASHINGTON (ISNS) -- You won't find the hottest spot on the planet in California's Death Valley or even in the Earth's molten core. The honor goes to a tunnel 12 feet beneath the snow that now covers Long Island, New York -- where tiny explosions more blistering than an atomic bomb happen every day.
The fiery explosions, created by an "atom smasher" at the Brookhaven National Laboratory in Upton, have set a new record for the highest temperature ever measured: 4 trillion degrees Celsius. That's much hotter than the center of the sun (a mere 15 million degrees) and about 40 times more scorching than the supernovae unleashed by the explosions of dying stars.
"It's a hotter temperature than anything we know about in the universe," said physicist Steven Vigdor of BNL, a member of the team that reported the new record on Feb. 15 at a meeting of the American Physical Society in Washington, D.C.
But Vigdor and his colleagues are not making weapons out of their record-breaking subterranean fireballs. Each explosion is much smaller than an atom, far too tiny to be destructive.
The scientists are time-traveling.
Their experiments seek to recreate the first microsecond after the Big Bang, when a thermometer stuck in the newborn universe would have read a temperature of few trillion degrees. Before the first planets, galaxies or even atoms, space was filled with a hot soup of tiny particles called quarks and gluons, according to modern theories.
Now, these theories have been definitively confirmed for the first time. The extreme temperatures of the scientists' explosions certify that they have successfully cooked up tiny drops of this primordial soup -- a substance called "quark-gluon plasma" that has not existed for almost 14 billion years.
How to Cook Subatomic Soup
The recipe for quark-gluon plasma calls for trillions of gold "ions" -- naked atoms stripped of their outer covering of electrons so that only the solid centers remain. These heavy gold ions accelerate to near the speed of light at BNL's Relativistic Heavy Ion Collider (RHIC, pronounced "Rick"), a 2.4-mile underground racetrack.
Two beams crowded with gold particles travel in opposite directions around the two lanes of the circular track. Where the lanes cross, the beams cross. Most of the tiny bits of gold whiz harmlessly by each other, but some smash into each other and explode.
"We analyzed about a thousand collisions per second, about a billion in total," said Barbara Jacak of Stony Brook University in New York.
In the heat generated by a head-on collision, the gold ions burst apart into particles that melt -- creating a drop of ultra-hot quark-gluon plasma no bigger than an atom.
"We're dumping a huge amount of energy into a very small volume," said Vigdor.
This plasma exists only for a brief instant. If a second were the size of all the beaches on the planet, the amount of time that the plasma sticks around would be smaller than a grain of sand.
Extremely Small and Incredibly Brief
How do scientists measure the temperature of something that happens in such a short time and in such a tiny space?
The RHIC detectors cannot directly see quark-gluon plasma. Instead, they work backwards from evidence left over after the gold ions collide.
Collisions create miniature flashes of light recorded by the detectors. Many collisions added together produce a glow that can be measured to calculate their temperature.
Other bits of evidence revealed in 2005 that this quark-gluon plasma is a nearly frictionless liquid, similar to water but even smoother. Fourteen billion years ago, the entire universe flowed for a split second.
The experiments will continue in Long Island and at the Large Hadron Collider in Switzerland, which are investigating ways to slam even heavier ions together at even higher energies and temperatures that move scientists closer to the hottest moment in history -- the Big Bang itself.

Severe Marine Heat Waves Linked to Human-Caused Warming
Infographic: How a Geiger Counter Works
Tumors Under Physical Stress Inside the Body May Not Respond as Well to Chemotherapy
This Long-Tailed Bird Makes Sounds With Its Feathers in Different Accents
Jeweled Orb-Web Spiders Mimic Flowers to Catch Pollinating Insects
END_OF_DOCUMENT_TOKEN_TO_BE_REPLACED