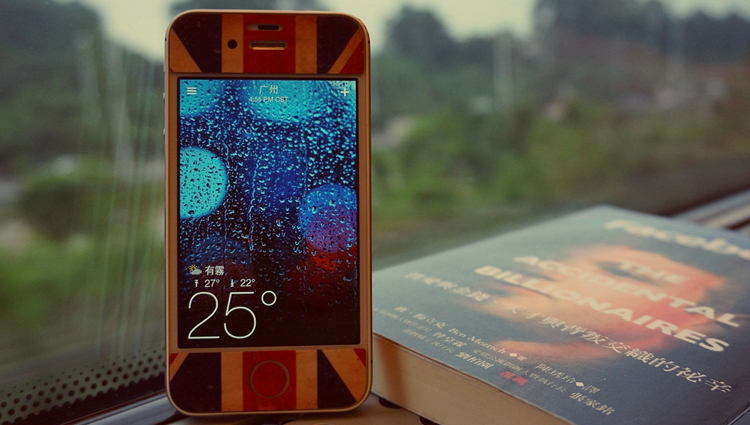 (Inside Science) -- Smartphones let us send messages, play games and watch cat videos at any time or place. Now these sophisticated instruments can boast another feat: measuring urban temperature.

Tracking the temperatures in cities is particularly important because of the so-called urban heat island effect. Simply put: a city tends to be warmer than its surrounding area. This temperature boost comes from a number of factors, including the heat-absorbing materials common to cities like cement, asphalt, and buildings.

That extra heat means city dwellers, who make up about 80 percent of the U.S. population, must use more electricity to stay cool, while suffering discomfort and health risks. The effect also exacerbates heat waves, which can cause many deaths, particularly among the very young and the elderly.

Yet the global population continues to urbanize—as of 2007, most humans live in cities. Building cities that resist the urban heat island effect means learning more about how existing cities heat up. Do certain neighborhoods stay cooler than others? How does the temperature change throughout the day?

To answer those questions, scientists need sensors spread throughout the urban area, capable of capturing information in real time. That rules out meteorological observation stations, which sit in one place, and satellites, which only collect data at set time intervals. Even an urban deployment of thermometers could fall victim to vandalism.

Instead, why not use the ubiquitous smartphone? "It's a very innovative way to look within urban areas," said Matei Georgescu, who researches the environmental impact of urbanization at Arizona State University, in Tempe. He was not involved with this study.

Sensors keep track of smartphones' battery temperatures, which reflect their surroundings. Of course, the battery temperature is also affected when a phone is used heavily or held in a pocket. But when the data from hundreds of thousands of phones is combined, these sources form a constant noise signal that can be measured and eliminated.

“The important thing is that you have enough users, so that when you average over that pool of users, you get an even readout, instead of being influenced by one guy who's just using his phone a lot and heating up the battery," explained James Robinson, a co-author of the paper, and the co-founder and chief technology officer of OpenSignal.

OpenSignal is an application that collects smartphone data to learn about the factors that weaken signal strength. One source of this data, at least in Android systems, is the battery.

According to Robinson, "We started to analyze the temperature data. The strongest correlation we found was between the battery temperature and the air temperature of the location the reading was taken that day."

Then collaborators at Wageningen University, in the Netherlands, and the Massachusetts Institute of Technology, in Cambridge, refined the algorithm and turned it into a heat transfer model, to account for the factors that influence battery temperature, such as the phone's insulation, the owner's body temperature, and of course the outside temperature.

The model did not fare as well, however, with the data from Moscow and Paris. To fix these errors, the researchers suspect they may have to take seasons into account. For example, during the winter months, people spend more time indoors than they do during the balmy days of summer. This change in behavior could skew the results.

Even with its inaccuracies, the model can still help urban heat island researchers like Georgescu. He envisions the smartphone estimates of air temperature as a complement to other data sources, such as satellites. "Satellite overpasses don't occur every minute," he explained. "With smartphones, you basically have real-time information."

On the other hand, Georgescu's ASU colleague David Hondula, who was not involved in this study, wants to use smartphones to track the heat exposure of individuals. "If your phone is tracking your weather conditions, you might have a personalized alert that you have experienced excessive heat as you've moved through your daily life," said Hondula. When informed of their heat exposure, people can take steps to protect their health, and thus reduce heat-related mortality.

In Hondula's words, "There's certainly the potential for many important questions to be answered, if everyone's walking around with a potential environmental monitor in their pocket."