The Iceman Cometh at 275 Molecules of Water

The Iceman Cometh at 275 Molecules of Water

How many water molecules do you need before they start freezing to form ice crystals? 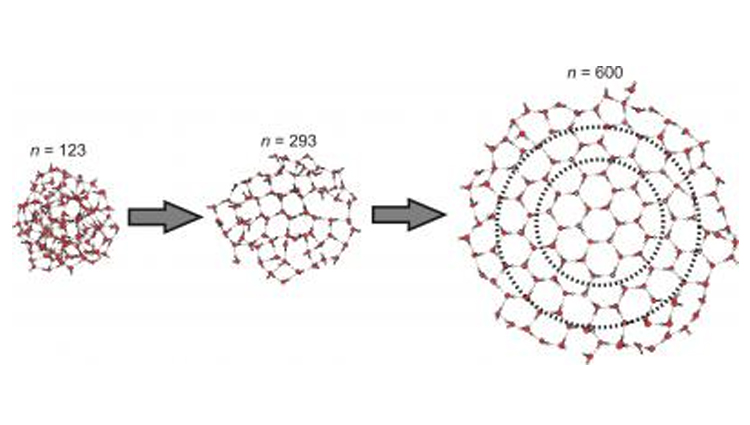 But how many water molecules do you need before they start creating crystals? Previously scientists had narrowed it down to between 100 and 1,000 molecules, but Christopher Pradzynski and colleagues at Universität Göttingen in Germany have found that around 275 is the magic amount of molecules where tiny ice crystals begin to form. For comparison, a drop of water contains about a billion trillion molecules of water. Pradzynski’s results were published in a recent edition of Science.

So why has it taken so long for scientists to put a lower limit on a process that happens in ice cube trays around the country every day? The problem is being able to tell when the tiny ice crystals have formed.

Pradzynski and his team solved this crystal conundrum by sticking a sodium atom onto their groups of water molecules. When a laser hits the sodium atom, it removes electrons from it causing the now electrically charged atom to send back an infrared signal. The amount of energy in the returning signal changes if the surrounding water molecules have spread out to form a crystal. Through trial and error with different sizes of water molecule clusters, Pradzynski’s team landed on the 275 number – the point at which the sodium atoms’ signals began indicating the water’s transformation, or phase change, into an ice crystal.

By better understanding water’s frosty phase change, Pradzynski thinks that the macroscopic properties of water can be better predicted. Those better predictions can help climatologists predict snow formation, but they probably won’t help you clean up the sticky mess in your freezer from that exploded can of soda.

Severe Marine Heat Waves Linked to Human-Caused Warming
Infographic: How a Geiger Counter Works
Tumors Under Physical Stress Inside the Body May Not Respond as Well to Chemotherapy
This Long-Tailed Bird Makes Sounds With Its Feathers in Different Accents
Jeweled Orb-Web Spiders Mimic Flowers to Catch Pollinating Insects
END_OF_DOCUMENT_TOKEN_TO_BE_REPLACED