Leg joints are stocked with 'teeth' that lock and rotate. 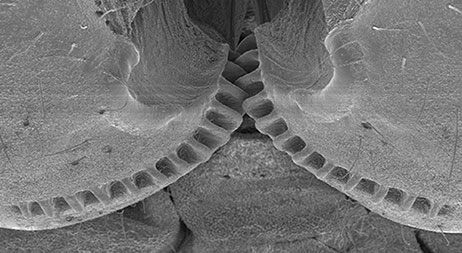 (Inside Science) -- The rapid jumps of baby plant-hopping insects are powered by structures in their legs that look and work like human-made mechanical gears, a new study suggests.

The finding, detailed in this week's issue of the journal Science, reveals a remarkable case of similar evolution in animals and machines, scientists say.

"I think it's quite cool," said Malcom Burrows, a zoologist at the University of Cambridge in the U.K. "It's a convergence on a solution to the same problem."

Burrows and his colleague Gregory Sutton were studying how insects manage to jump so quickly when they turned their attention to a species found in gardens across Europe called Issus coleoptratus, also known as the planthopper.

When the pair studied immature forms, or nymphs, of the insect, they discovered protruding, teeth-like structures on their hind-leg joints.

Upon closer examination using a microscope, the "teeth" were revealed to be part of curved gear- or cog-like strips found on each hind leg. And just like a cog, the teeth appeared to intermesh with one other, like on the gears of a bicycle.

"We were totally dumbfounded when we saw this," Burrows said.

The scientists' astonishment grew when they took high-speed video of live planthoppers and watched as the gear teeth of the insect's opposing hind legs locked together and rotated in preparation for a jump.

"You could see these gear wheels moving past each other, just like a man-made gear wheel. It was extraordinary," Burrows said.

The video also revealed that this mechanism worked to couple the insect's legs to a remarkable degree: when one leg moved, its cog firmly engages with its counterpart on the other leg, turning it and causing it to move by the exact same amount.

The end result is that both legs are synchronized to within 30 millionths of a second of one another.

Such synchrony would be very difficult to achieve using only the insect's nervous system, Burrows said. "The nervous system uses neural impulses with durations of one to two milliseconds — much longer than the 30 microseconds we observed."

Baby planthoppers require this level of precision when jumping because even tiny discrepancies between their two legs would impart a sideways twist and spin the insects out of control.

"They're going incredibly fast," Burrows said. "In one millisecond, they're going from zero velocity to about 12 mph."

Burrows says that while other examples of cog-like structures exist in the animal kingdom -- such as the shell of the cog wheel tortoise or the back of the wheel bug -- they are ornamental rather than functional.

The hind leg segments of some beetles do bear a striking resemblance to screws, he added, but "how it works and whether it works like a screw hasn't been shown."

Biologist Sheila Patek of Duke University in Durham, N.C., said she has come across many analogies between biology and man-made products in her own research. "I discovered a sound-producing mechanism in spiny lobsters that works like a violin," said Patek, who was not involved in the research on the planthoppers. "I've also worked on a fungal spore catapult that works like an inkjet printer."

Hillel Chiel, a professor of biology, neurosciences and biomedical engineering at Case Western Reserve University in Cleveland, who also did not participate in the research, noted that more parallels between biological and man-made structures might exist if humans were better materials engineers.

Interestingly, Burrows and Sutton only found leg cogs on planthopper nymphs — the legs of adult insects don't have them. The scientists suspect that the teeth of the gears wear down with time; they noted instances of leg gears with degraded teeth that "slipped" a few notches before catching.

For nymphs, such wear and tear isn't a huge problem, because they molt — or shed off their worn outer skins for new, larger ones — regularly.

"If some damage occurs to a cog wheel, it can be repaired at the next molt," Burrows explained.

Molting stops when the insects reach adulthood, however. "If you damage your cogwheel on your first day as an adult, then you're a very unlucky planthopper," Burrows said.

Instead of cogs, adult planthoppers use a different mechanism to synchronize their legs during leaps.

This flexibility is a hallmark of biological systems, Chiel noted, and one that engineers of biologically inspired robots might take note of.

Ker Than is a freelance writer based in Southern California. He tweets at @kerthan.