Tusks from millions of mammoths could suppress poaching.
Image 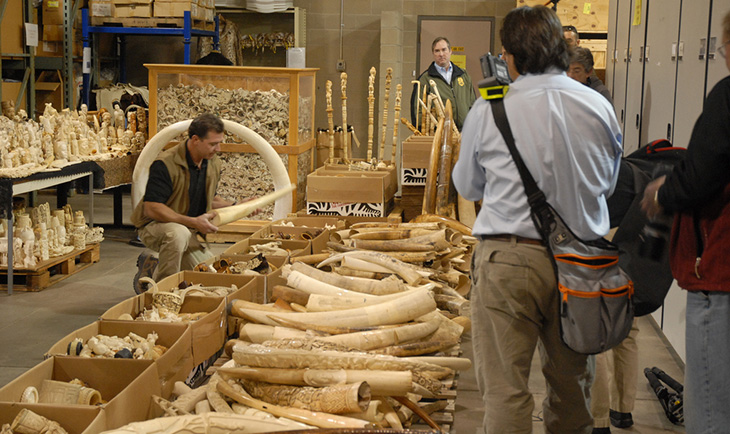 (Inside Science) -- Endangered African elephants may have an unlikely ally to protect them from ivory poachers and extinction: long dead mammoths.

Two Canadian economists, in a presentation at the American Economic Association meeting this month in San Francisco, said that unearthed tusks from mammoths frozen in the Arctic 20,000-40,000 years ago may save as many as 50,000 elephants from poachers each year, almost as many as were slaughtered the year before trade in ivory became illegal in 1990.

John Boyce, an economist at the University of Calgary and his graduate student, Naima Farah, reported that 34,000 African elephants are killed every year out of a population estimated at the Elephant Database as less than 680,000, and the number might have been 85,000 a year without the 88 tons of mammoth tusks exported from Russia annually.

That additional stock of ivory, they said, may be contributing to saving elephants from extinction. The animals need the help.

According to the National Geographic Society, there were 26 million elephants in Africa in 1800. That number was cut in half by 1900. By 1989, it had plummeted to around 600,000. Pressure from around the world led to a ban on ivory trading the following year, implemented by the Convention on International Trade in Endangered Species, and the elephant population began to recover, growing to about 1 million individuals over the next 10 years.

But in two separate incidents in 1999 and 2008, under pressure from some African countries, CITES allowed those nations to put stores of confiscated ivory on the market.

The result, the Society said, was catastrophic. It created a legal trade in ivory, a loophole poachers ran through. At the rate of the current slaughter, the African elephant is likely doomed as a species.

The world is unlikely to run out of mammoth tusks, the researchers said.

The number of mammoths still encased in permafrost in Siberia may total as many as 10 million, Farah said. Each has two tusks, and each tusk has from 20-100 pounds of ivory. As the permafrost melts, more carcasses appear. Often, it is just bones and tusks, but many carcasses have been almost complete. They are mostly in Siberia, where collecting ivory has become a cottage industry that somewhat resembles the Mexican drug trade with gangs fighting over the carcasses.

The total amount of ivory in the Arctic adds up to tens of thousands of tons. If each measure of mammoth ivory replaced the demand to deliver an equal amount of ivory from a newly killed elephant, that would be enough to save tens of millions of elephants over time.

However, the quality of the mammoth tusks varies, said Daniel Fisher, a paleontologist at the University of Michigan at Ann Arbor. Mammoth tusks have been buried a long time and could have weathered over the years.

In small pieces, elephant ivory and mammoth ivory are indistinguishable, but in large pieces or whole tusks, mammoth ivory is more yellowish and has more cracks, Farah said. “The biggest consumers are in China and Hong Kong,” Farah said. In China ivory is treated as wealth. It is carved for decorations and used in some folk medicine. (Hong Kong announced last week it would phase out ivory sales.)

Mammoths were about the size of modern elephants and were related, splitting genetically from a common ancestor about 6 million years ago, said Fisher. The males weighed 5 tons, the females 3.5 to 4. They were most distinguished from modern elephants by curved tusks and their shaggy coats.

Newborn mammoth babies weighed more than 200 pounds and grew rapidly. Why they became extinct is a matter of controversy among scientists.

Some say it was climate change -- mostly warming -- that did it. Others say it was human hunting, and some say it was both. Fisher said he won’t take sides, but hunting seems to be the most proven, he said.

Fisher is skeptical of the influence mammoth tusks have on the ivory market. There will always be a market for ivory, he said, and the people making money for selling ivory don’t care where it comes from.

Others have also argued that selling stocks of ivory captured from poachers in places like South Africa would also destroy the market for illegal elephant ivory, but Fisher says the poachers don’t play by the rules. They don’t have access to the stores, but do have access to automatic weapons and ammunition needed to kill elephants. If there is money to be made, someone will do what’s necessary to make it, he said.

Even if the market were suddenly flooded with ivory and the price dropped precipitously, there would still be a market for ivory. The existence of the market encourages poaching. That's why Fisher believes the trade in mammoth ivory does not discourage elephant poaching.

“Just by increasing access to ivory you support the market in the long term, and the market long term will always lead to the death of elephants,” he said. “It’s too easy just to shoot elephants.”

Meanwhile, scientists who study mammoths want to get their hands on more tusks. The tusks contain DNA and information about the lives of the animals, what they ate, and where they roamed.

“The tusks contain archives of their lives,” he said.

Meanwhile, the trade in mammoth tusks has become a violent black market that has altered the lives of people in Siberia who now hunt mammoth carcasses instead of living their traditional life styles. There have been gangs, murder and bribery, Fisher added.

Three years ago he learned the leader of one of the groups he traveled with in Siberia looking for mammoths to study was dead, poisoned by a mammoth tusk trader.