Large dogs age as if their adult lives are running at a faster pace than smaller breeds.
Image 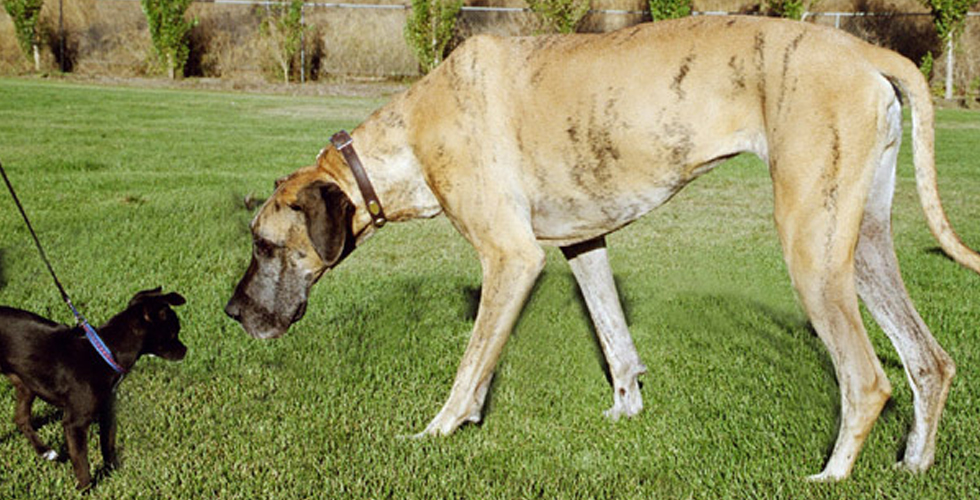 A large-breed Great Dane sniffs a much smaller Chihuahua.

(ISNS) -- Most large dog owners know they are setting themselves up for heartache because their beloved pets will die much sooner than smaller breeds.

The correlation between size and lifespan in dogs is well documented, but scientists are still unclear about the reasons behind it. Why, for example, does a 150-pound Great Dane only live for about 7 years, while the average lifespan of a 9-pound toy poodle is 14 years?

"This tradeoff has been known about for a long time, but nobody has yet investigated the underlying demographic mechanism," said Cornelia Kraus, an evolutionary biologist at the University of Göttingen in Germany.

One might assume from this that large dogs age faster, Kraus said, but it could also be that they just started aging earlier, and thus develop age-related problems sooner.

In order to distinguish between these two hypotheses, Kraus and her team analyzed demographic data, including age and cause of death, for more than 50,000 dogs from 74 breeds taken from the Veterinary Medical Database, a compilation of pet-health data from North American veterinary teaching hospitals.

The researchers also considered a third possibility: large dogs may just have an increased mortality risk throughout their lives, regardless of their age. In other words, their "baseline" mortality rate is higher than that of smaller breeds.

Each of these three hypotheses generate different so-called "mortality curves" -- a chart that results when mortality risk is plotted against age on a graph.

When the different dog breed data from the database was graphed, its curve most closely matched the one predicted by the faster-aging hypothesis.

"That's where we really see a strong correlation," Kraus said.

The analysis also indicates that large dogs age at an accelerated pace, such that "their adult life unwinds in fast motion," the authors write in a new study that will be published in an upcoming issue of the journal The American Naturalist.

The new findings are a valuable first step toward answering the question of why large dogs die young, said Cynthia Kenyon, an aging researcher at the University of California, San Francisco.

"I think what's really nice about this study is that these are not lab animals," said Kenyon, who was not involved in the research. "They're animals living out their lives in the real world."

Future studies might also investigate why larger dogs age faster, something that the current study doesn't address, Kenyon added. One intriguing clue, gleaned from previous studies, is that small dogs have lower concentrations of the growth hormone IGF-1, or insulin-like growth factor 1, in their blood than large dogs.

High levels of IGF-1 has been shown in a wide variety of organisms, including humans, to be associated with increased risk of death from age-related diseases such as cancer and heart disease. Conversely, manipulations that lower IGF-1 levels in many animal species slow their rates of aging, reduce the risks of age-related disease and extend their lifespans.

The new findings "might give the sense that the reason large dogs age faster is because they grow faster. But we don't know that," Kenyon said.

It could be that large dog breeds die younger because they have more IGF-1 – their large size might just be a side effect of having higher concentrations of the growth hormone.

One way to test this hypothesis would be to "take a small dog, and give it high levels of IGF-1 when it's young so it becomes a large dog," Kenyon said. "Then, when it's an adult, go back to a lower level [of the hormone], and see if you still get a long lifespan. I think that would be a very interesting experiment to do, but it has not been done."

Such an experiment could provide further proof that IGF-1 plays a critical role in the aging process. Furthermore, the fact that small dogs – which naturally have lower levels of IGF-1 – are often healthy throughout most of their lives could suggest that the IGF-1 pathway could be manipulated to make organisms live longer.

"This really argues that perturbations in this pathway that increase lifespan wouldn't necessarily make you sick in any way or have a detrimental effect on your health," Kenyon said.

There is some circumstantial evidence that taller individuals have shorter lifespans, Kraus said, but "it is incredibly difficult to study this in humans because we have so many environmental factors that affect our height."