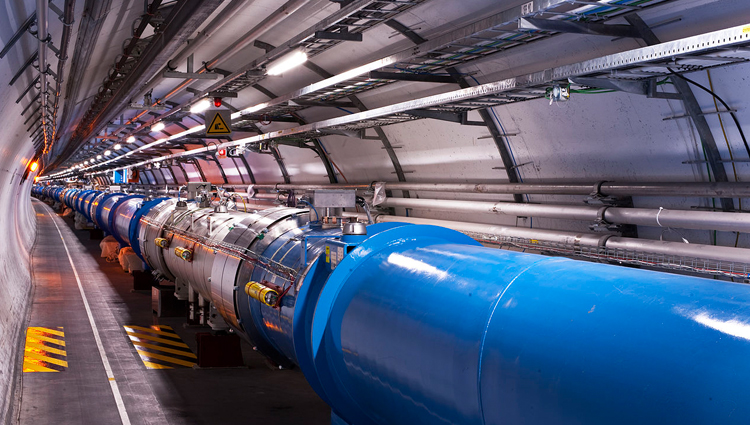 WASHINGTON (ISNS) --The Large Hadron Collider accelerated protons to a new energy record of 3.5 trillion electron volts on Friday -- a record for the fastest that particles have ever been accelerated by human technology.
The LHC had previously set a record of 1.2 trillion electron volts (a thousand times more energy than is packed into the proton itself) in December 2009 when it took the title of the most powerful accelerator in the world away from the Tevatron collider located at the Fermi National Accelerator Lab campus about 45 miles west of Chicago.
Protons are subatomic particles that reside in the nucleus of all atoms. Particles are accelerated to such high velocities in order to smash them against each other, causing a collision packed with enough energy that new phenomena can occur within -- such as the creation of never-before-seen particles.
Buried in a circular tunnel 300 feet underneath Geneva, the LHC consists of pipes in which protons, traveling at nearly the speed of light, are kept in their proper trajectories by powerful magnets spaced along every 30 feet or so around the 16-mile long ring. The largest -- and most expensive -- scientific instrument in the world now has plans to send two proton beams racing in opposite directions around underground enclosure in order to smash them together. LHC officials hope to have such high-energy collisions begin in the next few weeks, even possible occurring within a few days.
The proton beams are aimed so that collisions occur at fixed points that are surrounded by incredibly complex detectors, some of them the size of a large house and costing nearly $1 billion each. When the collisions occur, particles are thrown out sideways like debris from an explosion, their movements recorded in vast banks of sensors. The Compact Muon Solenoid detector -- the largest now operating at the LHC -- contains about 100 million recording elements that gather information from each collision event.
The CMS detector is "like a digital camera with 100 million pixels and with the ability to record 40 million pictures per second," said Dan Green, a Fermilab physicist participating in the LHC project. A "picture" in this case consists of a readout of all the trajectories of particles emanating from the collisions, as recorded by the state-of-the-art sensors. This information is used, in turn, to reconstruct the collision event and determine whether something interesting had occurred when the protons collided.
Another American physicist working on the LHC experiment, Ken Bloom of the University of Nebraska, said he was greatly relieved by the successful operation of the LHC beams.
"It is exciting, yet at the same time it has an air of unreality about it, given how long we've been waiting and talking about it," Bloom said, referring both to the many years it took to build LHC and to the unprecedented energy achieved in the experiment.
The LHC is to the tiny inner spaces of matter what the Hubble Space Telescope is to the vastness of outer space: Both explore an extreme range of space. While Hubble looks for unusual galaxies at distances of billions of light years, the LHC will look for unusual new particles at a scale the distance of a billionth of a billionth of a meter -- the actual nano part of a nanometer. While a telescope focuses light from the universe with a highly polished mirror and records it on an electronic detector before beaming the data back to Earth, data from the collider flows in the opposite direction from the underground detectors to the computers in Geneva and to regional data hubs around the world.
Filed under
Technology
Engineering
Physics
Author Bio & Story Archive