The Lonely Trek of the 'Steppenwolf' Planets

Scientists differ on how many nomad plants roam the galaxy.
Image 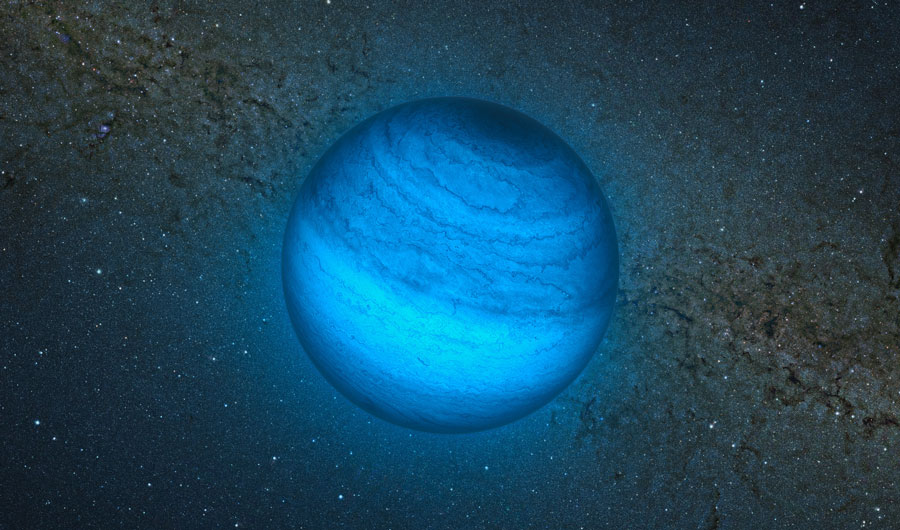 Artist’s impression of a free-floating planet.

(Inside Science) -- Think of a world without a sun -- a world where there is no day, no seasons, a world as dark as space itself.

Astronomers believe there are such wandering planets. How many is debatable. They have been freed from the grasp of their own suns, perhaps by gravitational collapse when their solar system was formed. Some may simply have been struck like a billiard ball by another large object flying by.

We know almost nothing about these planets except that they probably exist. Some scientists even speculate that geological phenomenon or radioactivity may produce internal heat on some of the planets. They could have warm surfaces and for some, perhaps even an atmosphere and life -- a setting for a science fiction novel if ever there was one.

Some are Earth-sized; some are perhaps the size of Jupiter. No one has settled on what to call them. They are sometimes called nomad planets, outcasts, wanderers, even Steppenwolf planets because they “exist like a lone wolf wandering the galactic steppes,” a reference from Hermann Hesse’s 1927 novel.

Many likely candidates have been found. Just how many is in dispute.

The first nomads were identified using a technique called gravitational microlensing, watching how the gravitational field of one star bends the light of another. If a nomad planet passes between a star and Earth, the star essentially flickers, which can be detected by astronomers.

In 2012, scientists at the Kavli Institute for Particle Astrophysics and Cosmology at Stanford University in California came up with data indicating there were probably thousands of nomad planets in the galaxy, perhaps billions, 100,000 around every normal star. Eighteen hundred candidates had been spotted the year before by NASA’s Kepler telescope in the constellations Cygnus and Lyra, 25 light-years from Earth.

The Kavli scientists used mathematical extrapolation to come to that figure, measuring the known mass of the Milky Way which can’t be accounted for by the known mass of planets, comets and stars, and concluded that all the known objects could not account for that mass. Most of it is probably dark matter, but some of the rest could be nomad planets “It depends on how you define ‘planets,’” said Adam Burgasser, professor of physics at the University of California, San Diego, who was not involved with the study. Some objects identified as nomad planets could even be low mass stars.

But in an article published online in July in the journal Nature a group of astronomers in Europe and the U.S said the Kavli number appeared too large.

Using a more refined microlensing technology to analyze a sample of 2,600 microlensing events, a much larger sample than the Kavli group used, the scientists at the Optical Gravitational Lensing Experiment found far fewer likely nomads. Przemek Mróz, a doctoral student at the University of Warsaw Observatory and the lead author of the Nature article said it was more like one Jupiter-mass planet for every four main sequence stars.

Mróz said each wandering planet was probably formed as a solar system was formed, “and for some reason, it was rejected from the parent system,” he wrote in an email from Warsaw. “Young planetary systems are not as stable as our solar system. Dynamical planet-planet interactions may cause planet-planet collisions, planet-star collisions, or -- in the majority of cases -- ejection from the parent systems.

Other causes of planet ejections were also proposed, such as dynamical interactions in binary star systems, stellar fly-bys, or interactions in stellar clusters. Some may have been knocked out like a billiard ball by another object.

Since the planets are hundreds of millions of years old, tracing back what happened to the nomads is impossible. The geometry of the parent solar system matters. Binary star systems are stable but if a third star is present it can become unstable and hard to predict, known as Isaac Newton’s three-body problem. For instance, a solar system with three stars is stable if two of them are orbiting closely, with third far away. If all three are close to each other, the system is unstable and one may go flying off, Burgasser said.

Astronomers speculate there could, despite the darkness, be life on the nomads, the Steppenwolf planets.

Take a rogue planet with an ocean under an ice shield. Geothermal or radioactivity could warm the water, and that could sustain life. It may even help answer the question of how life formed on Earth.

What if a Steppenwolf planet carrying life crashed into a young Earth and spread its inhabitants across the surface?