Scientists argue that Deimos’ tilted orbit owes to a Martian ring that disintegrated billions of years ago.
Image 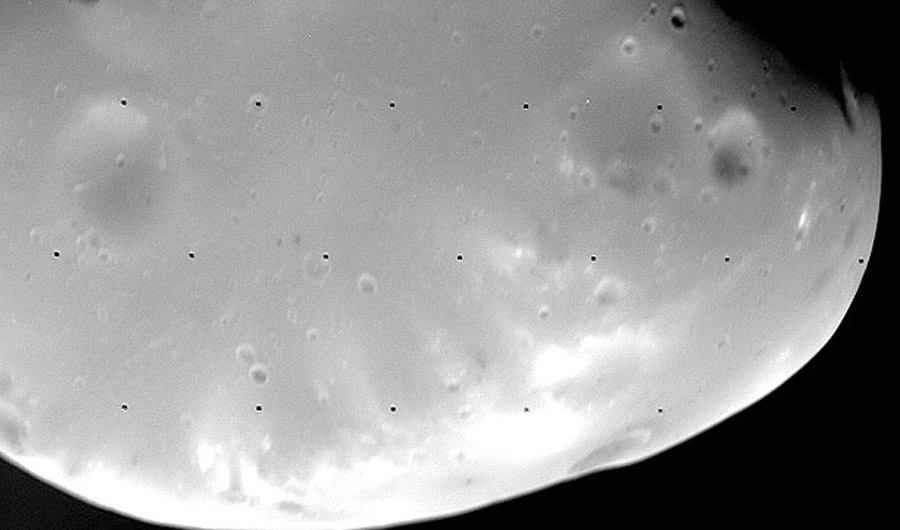 Deimos, the smaller moon of Mars.

(Inside Science) -- Mars’ diminutive moon may be only 8 miles across, but it holds key information about the planet’s history. Deimos’ strangely off-kilter orbit can only be explained by Mars having a prominent ring orbiting it billions of years ago, astrophysicists argue.

Scientists have long debated the origins of the red planet’s pair of little moons, speculating that they were renegade asteroids pulled in from the asteroid belt between Mars and Jupiter. But new computer simulations by a team led by Matija Ćuk, a research scientist at the SETI Institute in Mountain View, California, show that they’re more likely to have assembled as part of a ring around Mars, with rocks clumping up and coalescing into moons. He presented their research, which is about to be published, at the virtual conference of the American Astronomical Society on Tuesday.

“I can now explain Deimos’ orbit, and I have stronger evidence for the theory of rings and moons recycling,” Ćuk said.

He makes the case that Deimos and its bigger brother, Phobos, probably formed, broke apart and spread out into a rocky ring, and then reformed from the rubble many times. Deimos’ orbit is tilted about 2 degrees off the plane of the equator, which could have happened for a number of reasons, such as an asteroid drawn by Mars’ gravitational pull smashing into it or flying nearby. But Deimos’ almost exactly circular orbit suggests that that’s not what happened, Ćuk said.

Instead, the moon could have such an orbit if it was tilted by a ring around 3.5 billion to 4 billion years ago. Its orbit is also gradually migrating outward, which could have been triggered by a past interaction with the ring. In the scientists’ scenario, the current version of Phobos formed later from the material in the ring, and it’s being pulled closer to Mars, such that it could eventually be pulled apart and dispersed into a new ring.

Mars was a different place 4 billion years ago, with more of an atmosphere and a life-friendly climate. Asteroid impacts on Mars and its moons ended around that time too, making it possible for the moons’ orbits to preserve a historical record from then on.

Ćuk and his colleagues’ ring cycle theory has implications for the future, too. “You can keep recycling rings into moons and back, but you’re losing mass each time, so every new moon is smaller,” he said.