New Superlens Made From Spider Silk

New Superlens Made From Spider Silk 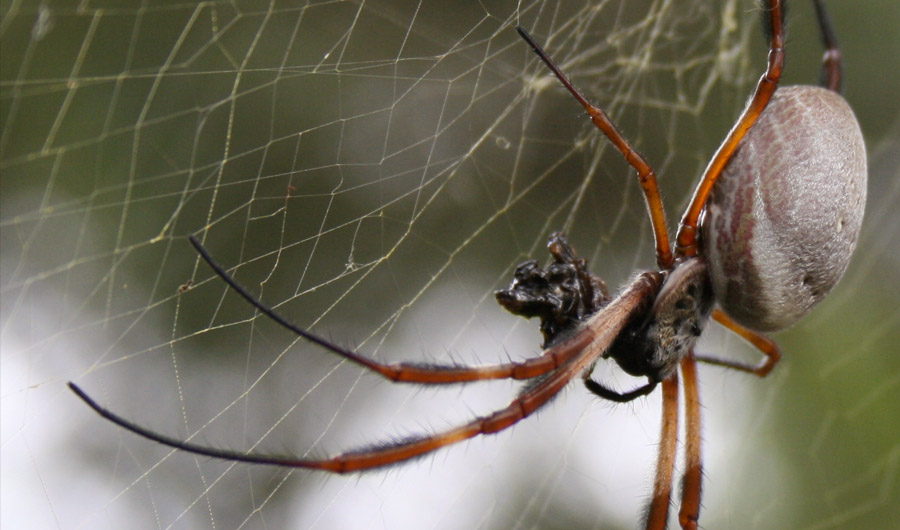 (Inside Science) -- Scientists who use conventional light microscopes -- like the one you probably peered through in high school science class -- face a limit on the size of objects they can view. Basic properties of light prevent them from focusing on anything smaller than the tiniest known bacteria.

There is a work-around in so-called superlenses that perform clever optical tricks to shrink the size minimum by half, and sometimes even more. But superlenses are difficult and expensive to manufacture.

Now, though, researchers have come up with an easier, cheaper, and natural alternative: a superlens based on spider silk.

The new superlens is the first to use a naturally occurring biological material.

"I always think a simpler solution to the superlens is highly desirable," said Zengbo Wang, senior lecturer in imaging and nanophotonics at the University of Bangor in Wales, who led the project.

"They have made a very nice demonstration," said Nicholas Fang, associate professor of mechanical engineering at Massachusetts Institute of Technology in Cambridge and a pioneer in superlens technology. "The team has promoted something very exciting."

Fang cautioned, though, that the development remains in its early stages. "I don't know yet how far they can push the boundary," he said.

Potentially, scientists using a microscope equipped with a superlens of spider silk can view viruses, germs, structures inside cells, and the details of minuscule computer chips and electronic circuits. None of those is visible through conventional microscope lenses.

Superlenses work by overcoming what scientists call the optical diffraction limit, which causes any object less than half the wavelength of the light used to view it to appear blurred.

Since visible light has a wavelength range of 390 to 750 nanometers, the smallest feature visible in a conventional microscope is about 200 nanometers in size. That's slightly less than one millionth of an inch.

Devices such as electron microscopes can pick out items as small as individual atoms -- much smaller than the 200-nanometer limit -- but can kill live cells and viruses, require a vacuum, and take only stationary pictures.

"The optical method is non-invasive and allows real-time examination of samples," Wang said.

Superlenses overcome the diffraction limit in optical microscopes by collecting a special type of electromagnetic oscillation called an evanescent wave. The waves carry nanoscale information about an object that normal microscopes cannot pick up, Wang said.

In effect, the lenses break up light reflected from a sample into millions of tiny beams that act like flashlights to illuminate the sample.

Fang developed the first concept of a superlens for optical microscopes in 2005, applying layers of aluminum and the rare earth germanium to a conventional lens.

"In 2010 I was able to show that we can resolve lines 30 nanometers wide," he recalled.

Other research teams have developed superlenses based on nanowires embedded in aluminum oxide, and on carbon nanotubes. And in August, Wang's team made its own artificial superlens based on minuscule nanobeads.

The inspiration for the new superlens came to Wang when he was playing with his children in his yard.

"I noticed spider silks, and suddenly the idea of using the silk for super-resolution imaging came to my mind," he recalled. "In the following days our team carried out experiments and confirmed that the silk really works as a superlens, which is amazing."

The advantage that Wang recognized was the thinness of the silk, which has a diameter smaller than that of a human hair.

To develop the idea, Wang's team contacted the Oxford Silk Group, based at the University of Oxford in England, which studies spiders and other silk-producing creatures.

Fritz Vollrath, who heads the group, suggested that the Bangor scientists use dragline silk from the Golden web spider (Nephila edulis), a thumb-sized arachnid found in Australia and nearby island nations.

"Dragline silk is the safety line silk the spider dangles from and uses for the structural threads of its web," Vollrath explained.

To prepare their superlens, team members first placed the silk on the sticky side of a piece of transparent tape. Next, they placed the tape directly on top of the sample they wanted to image. "Then from the side we injected isopropyl alcohol that fills the gap between tape and sample, to improve imaging quality," Wang said.

With the set-up placed under the microscope, adjusting the instrument's focus reveals images of the sample in super-resolution. The clearest images appear in a narrow strip directly opposite the viewer's line of vision.

Team members used the silk technology to take pictures of structures on a microchip and grooves on a Blu-ray disc that are invisible in conventional microscopes, they reported in the journal Nano Letters.

Just what makes the Golden web spider silk effective as a superlens remains unclear. "We don't know yet," Vollrath admitted.

They do know, however, that the lens has two limitations.

"Because the silk's diameter is so small, the observation window is also small," Wang explained. "And other superlenses can achieve better resolution than that of the silk lens." Some can resolve items just 45 to 50 nanometers wide, while the spider silk system has a limit of 100 nanometers.

Wang's team believes that it can overcome the first problem by scanning the silk lens over the entire surface of the sample under investigation. Wang also suspects that other natural superlens materials whose resolution equals that of the artificial lenses can be found.

"I have a dream that some day every microscope user will have the superlens product in their hand for daily use," he said. "It can find applications in nanofocusing, nanolithography, nano-solar energy concentration, nanochemistry and nanomedicine as well."

Fang is equally enthusiastic about the eventual value of superlens microscopes. "The promise is to see things relevant to biological events -- [for example,] to observe how a virus attacks a healthy cell," he said. "Real-time imaging is important."