Long-sought particle not conclusively detected yet, but researchers may have found its hiding place.
Image 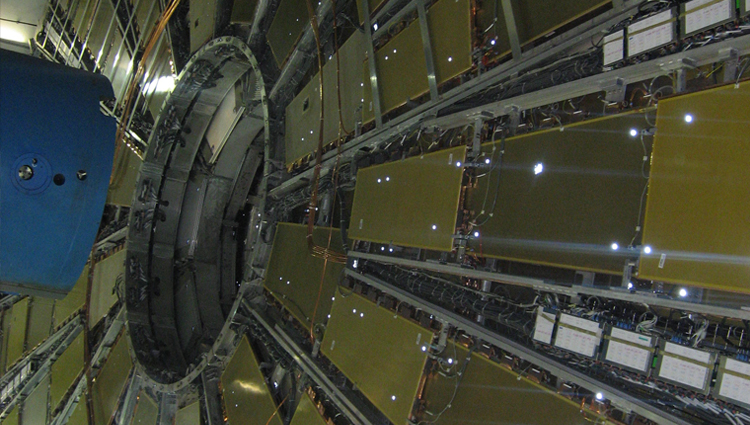 (ISNS) -- Physicists in Europe today reported possible signs of the Higgs boson, a missing piece in the particle-physics puzzle long suspected of giving elementary particles -- such as electrons and quarks -- their mass.

Reporting the latest analysis of collision debris from the world's highest-energy particle smasher, the researchers do not have enough data to declare a discovery -- another round of particle collisions next year should produce more answers -- but they gave a likely mass range for the Higgs if it exists. Researchers presented their results in a webcast and widely watched seminar from CERN, the European Organization for Nuclear Research, in Geneva, Switzerland.

"The excitement is palpable, and there are an incredible number of extremely competent and brilliant people looking at the data," wrote Drew Baden, a University of Maryland professor of physics in an email to Inside Science . "If the Higgs is real, we will know for sure soon. But not on [this] Tuesday," wrote Baden, who belongs to one of the detector teams presenting today's results.

Buried hundreds of feet below ground on the Swiss-France border, the Large Hadron Collider at CERN accelerates protons to the highest energies they have achieved to date. Physicists have produced multitudes of proton-proton collisions at these record-high energies since March 2010. When protons smash against each other, the collision creates a ball of energy from which new particles can form, including the Higgs boson. Einstein's famous equation, E=mc2, shows that matter and energy are interchangeable, so from the energy of the collision, massive new particles can be created.

The mass of the Higgs boson, if it exists, has been larger than what particle accelerators have been able to produce until recently. Present results at LHC, and earlier ones at the Tevatron accelerator at the Fermi National Accelerator Laboratory in Illinois, ruled out the existence of the Higgs in certain mass regions.

Researchers from two LHC detectors, known as ATLAS and CMS, presented new data at today's long-awaited seminar. Fabiola Giannoti, head of the ATLAS experiment, reported an excess of events from the collisions that may suggest the production and decay of the Higgs.

Giannoti reported that her team's data suggests that the most likely mass region for the Higgs lies between  about 116-130 gigaelectron volts, or  GeV, which corresponds very roughly to 116-130 times the mass of the hydrogen atom. She reported an excess of collision events at around 126 GeV, but could not conclusively declare a discovery. Guido Tonelli, spokesperson for the CMS experiment, also reported what he called "intriguing, tantalizing hints" of the particle. His team reported a most likely mass range for the Higgs at between 115-127 GeV, with their results most compatible with a mass of 124 GeV. Both teams do not have enough statistics to declare a discovery.

Together, these two groups have independently found intriguing collision events between 124 and 126 GeV, suggesting that the Higgs may have been produced at the LHC.

"I think it is significant that the two collaborations, analyzing independently of each other and with data from their quite different detectors, both see Higgs-like events in this same mass range," University of Maryland particle physics theorist Raman Sundrum, who is not part of either detector team, wrote to Inside Science shortly after the seminar ended. "If this holds up I think it would be a monumental scientific discovery and the result of Herculean and brilliant efforts."

However, all researchers emphasized that at this point there is still a chance that previously discovered particles, or background noise, may be responsible for their signals. Each group emphasized they found a relatively small number of interesting events in the mass ranges that they reported. Statistically, there are several chances in a thousand that the results are a fluke. More collision events can reduce these odds to the point that the researchers can reasonably conclude that they have discovered signs of the actual particle.

Named after Peter Higgs, one of the theorists who postulated it in 1964, the Higgs boson would prevent a breakdown of the Standard Model of particle physics. One of the most successful theories in the history of science, the Standard Model describes three fundamental forces -- electromagnetism, the weak and strong nuclear forces -- as well as the menagerie of known particles in the universe, from quarks and electrons to photons and neutrinos. Without the Higgs, the model would be unable to explain important differences between the forces and why some particles have mass and others are massless.

However physicists would view a conclusive detection of the Higgs as the beginning, and not the end, of an era of discovery. Just as Einstein's general theory of relativity incorporated all the predictions of Newton's original theory of gravity but enabled predictions of new things such as black holes, the Standard Model, fortified by a Higgs boson that has been proven to exist could lead to more advanced theories, as well as new physics.

"We do not know where its further careful study will lead," wrote Sundrum. "We are just at the beginning of the journey."

The larger theory known as supersymmetry calls for the existence of "superpartner" particles that would accompany all known particles. String theory, an even more elaborate description of nature, says the fundamental building blocks of the cosmos are not particles such as electrons but that even electrons result from vibrating strings and other objects such as membranes that are far too small for current scientific instruments to detect.

Still, Sundrum cautions against reading too much into today's results. He said that the news does not rule out the possibility that the Higgs boson could actually be a class of particles. And they also don't validate new physics theories such as the supersymmetry model.

"The best evidence for supersymmetry would be detection of super-particles themselves," wrote Sundrum.

After today's announcement, physicists are reserving judgment, saying that the data is chiseling away the possibilities of where the Higgs may be located.

More collisions are likely to settle the question.

"There's nothing conclusive we can say right now," said Baden.  "If all goes well we will likely have a conclusive result by this time next year."