When the going gets rough bacteria must choose to adapt or hunker down.
Image 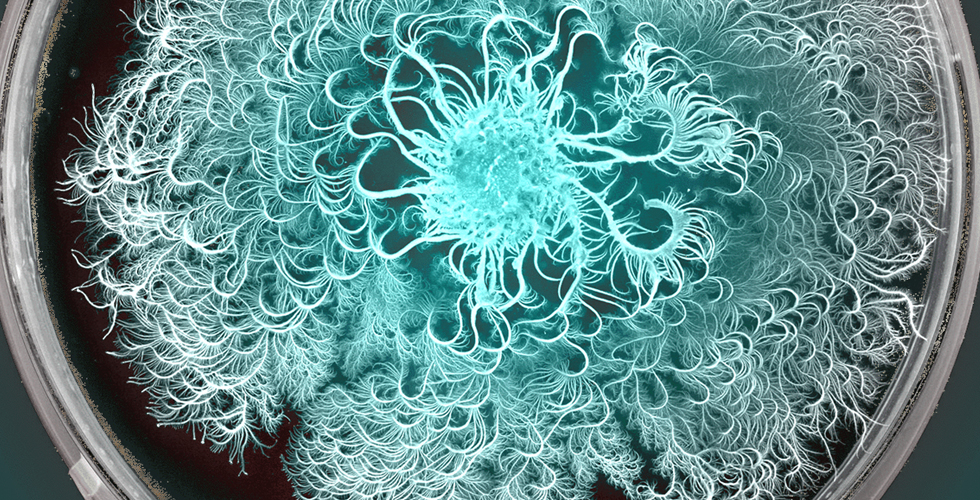 (ISNS) -- Bacteria under stress may carry out the often sophisticated principles of game theory to decide whether to hide from danger or brace themselves amidst hostile conditions, scientists have reported. The bacteria communicate information among themselves, check the situation with neighbors, and then decide whether to make an existential plunge by transforming into a safer but less productive existence.

The single-cell organisms appear to employ something similar to the Prisoner's Dilemma, the scientists reported, part of game theory further developed by the mathematician John Nash and popularized in the book and film "A Beautiful Mind." The research could have some implications for human health, but the researchers admit that now is just speculation.

The research was performed by teams led by José Onuchic at Rice University, and Eshel Ben-Jacob at Tel Aviv University and reported at a meeting of the American Chemical Society in San Diego, Tuesday, March 27.

The Prisoner's Dilemma, first conceived in 1950 by two mathematicians at the RAND Corporation, works like this: Suppose two people are arrested for a felony but the evidence is weak. The police separate the two, and the prosecutor goes to both and makes them the same offer. If one suspect remains silent and his partner confesses, the first goes free and the second gets the long prison sentence. If both confess, they both go to jail but they get considered for early parole. If neither confesses, they both get shorter sentences for lesser charges.

Each prisoner now faces the dilemma: whatever the other does, he is better off confessing. But if both confess, the penalty is greater than if they had both remained silent.

Bacteria, they researchers reported, can find themselves in similar straits.

Bacteria are known to communicate with each other chemically about such things as how crowded the colony is, whether there are environmental stressors such as a lack of nutrients, and about other colonies of bacteria around them.  They send chemicals and get back a chemical response, even when there are trillions of bacteria in a colony.

The scientists worked with Bacillus subtilis, found in soil and known for years to communicate among themselves. They react to droughts, radiation, famines, radical changes in temperature and overcrowding, a process scientists call quorum sensing.

When confronted by stress, the bacteria face two choices: they can become spores by dumping half their DNA into the environment, imprison themselves in shells, and hunker down to wait for the harsh conditions to abate before returning to normal, Onuchic said. Or they can wait while the bacteria around them become spores, absorb their ejected DNA and try to adapt to the new situation.

Like the prisoners, the bacteria not only have to worry about what is right for themselves, but what the surrounding bacteria might do.

In almost all cases in nature the bacteria go the spore route, but in 1-2 percent of the cases, they wait it out, a process called competency.

Both Onuchic and Ben-Jacob are physicists, so the team applied ideas from complex systems theory and other physics concepts to analyze how the bacteria chose.

Becoming a spore is the sure way around a difficult decision -- spores are almost indestructible -- but it "is not good for bacteria, it's anti-evolutionary," Onuchic said, "a traumatic experience."

Competency is much easier but runs a much higher risk of disaster.

Sporulaton is the equivalent of confessing in the Prisoner's Dilemma; competency is keeping quiet.

The bacteria communicate through 11 different pheromones or peptides, which relay information among the cells, Ben-Jacob said, and they are regulated by two master genes. One has an on-and-off-switch. When it is on, it inhibits the cell from going to competence, the more dangerous state because the bacteria still are exposed to whatever is happening to the environment. The second is a timer, which synchronizes with timers in the other cells and adjusts as the stress fluctuates. The timers act like synchronizing metronomes, devices that click in a steady fashion to help musicians keep time.

If the stress goes high enough, the timer can inhibit the first gene, "inhibiting the inhibition," a bacterial form of courage, Ben-Jacob said, and the cells can then reject  sporulation and try to adapt to the new situation.

The scientists speculate that a similar  process may be involved in cancer cells when the time comes for the tumor to spread.

"There are whole companies devoted to developing antibiotics that interfere with quorum sensing," he said.