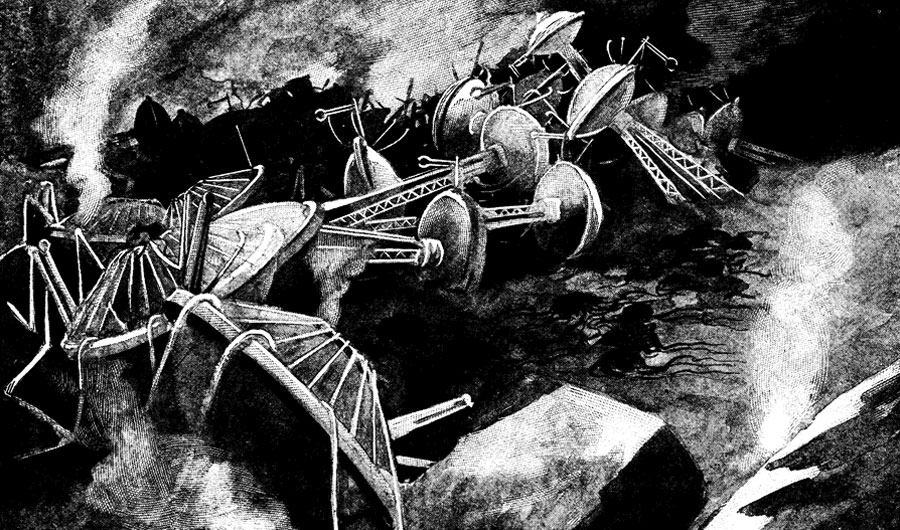 An illustration from H.G. Wells' classic science fiction novel "The War of the Worlds."

(Inside Science) -- "No one would have believed in the last years of the nineteenth century that this world was being watched keenly and closely by intelligences greater than man's and yet as mortal as his own. ..."

So began one of the most famous opening sentences in English literature and the foundation of a whole new literary genre -- science fiction. The writer was Herbert George Wells, and the book was The War of the Worlds, first published as a complete work in 1898.

He was a pioneer of the science fiction genre along with France's Jules Verne, the Luxembourg-born American editor Hugo Gernsback, and England's Mary Shelley. But while Gernsback mostly was an editor of other people's writing, and Verne is not read as much now, Shelley's Frankenstein and Wells' novels continue to be widely read and have been adapted into dozens of films. Wells himself has appeared as a character in about a dozen more films, often dealing with time travel.

Wells was a socialist, an anti-Semite, a eugenicist, a prophet. He was a social critic who had multiple extramarital affairs with some of the era's most famous feminists, including birth control advocate and fellow eugenicist Margaret Sanger and writer Rebecca West. His science fiction, which he called "scientific romances," was largely a phase he went through but it made him a rich man and an influential writer.

Wells was born in 1866 in Kent, the son of a professional if impoverished cricket player. The family apprenticed him out to tradesmen several times but he never took to the training. But when he was sidelined in bed as a youngster after breaking his leg, he had learned to immerse himself in a world of books.

He became a science teacher although he was mostly self-taught. His self-education went so well he soon found himself at top-notch schools, sometimes as a teacher-student, teaching by day and taking classes at night.

He called himself a journalist but didn't do very much journalism.

One year his teacher at the Normal School of Science (now the Royal School of Science) was Thomas Huxley, a prominent defender of Darwin, whose influence on Wells' writing is clear in both his fiction and non-fiction, according to James Gunn, a science fiction writer and founder of the Gunn Center for the Study of Science Fiction at the University of Kansas in Lawrence. Huxley asserted that survival did not depend on who was the fittest, but who was ethically "the best."

"The conflict between these two processes lay at the heart of much of what Wells was to write," Gunn wrote in his essay The Man Who Invented Tomorrow. It was a nucleus around which Wells arranged facts.

Wells spent a great deal of time with his school's debating forum and joined the Fabian Society, a group in favor of fostering socialism through democratic means rather than a revolution.

He wrote numerous magazine articles about the future, including one in which humans had evolved into brains floating around in tubes of nutritive fluid.

He married his cousin in 1891 but they were divorced two years later. He married Amy Catherine Robbins, one of his students, in 1895 and the union lasted more than 30 years until her death in 1927. Robbins must have forgiven, or at least ignored, his multiple infidelities despite their notoriety.

The same year as his marriage to Robbins, he put together a series of stories into the novel The Time Machine (1895). It made his reputation as a novelist. In 1898 came War of the Worlds.

Wells freely admitted many of his ideas came from others. He lifted a line directly from Washington Irving's Rip Van Winkle (1819) in his novel When the Sleeper Awakes (1899). Time travel novels had sprung up in the middle of the 19th century, as had invasion books. His were simply the best and most read.

In all he wrote dozens of novels and short stories. He also wrote numerous essays and non-fiction pieces, almost none of which are still read.

Unlike Verne, who cared about the plausibility of the science in his stories, Wells put his characters in situations without explaining how they got there. He sends men to the moon in fairly impossible anti-gravity vehicles; Verne shoots them out of a cannon from Florida, which is arguably more realistic.

Wells' writings were also steeped in his social perspective. For example, Wells believed in eugenics, that the wrong people were reproducing and humanity was devolving. In The Time Machine the Morlocks are evolved from the working class, beautiful creatures but helpless. The Eloi devolved from the leisure class.

His books still resonate on film. The Time Machine has been made into a movie four times, most notably in 1960. War of the Worlds was adopted seven times, most successfully by Steven Spielberg in 2006. According to legend, in 1938, Orson Welles' radio dramatization of the book caused widespread panic when listeners confused it with a radio newscast of an actual invasion. How much of that really happened is debatable. The Invisible Man has been adapted a dozen times and many of his books have made it to television one way or another.

One of his works, the non-fiction A Short History of the World, written in 1922, is still in print. A new edition was published in 2016. The worlds and scenarios that Wells envisioned in his fiction and other writing have inspired writers and filmmakers for decades.

"Wells was, indeed, at the forefront of making science fiction what it can be, a tool for exploring implications of our pell-mell rush into the future," said science fiction author David Brin (the Uplift series). "Some of the most powerful [science fiction] thought experiments verifiably changed policies and even history. I count among these 'self-preventing prophecies' like Nineteen Eighty-Four, Soylent Green, On The Beach, and possibly Brave New World.

"Millions of people read those books and actively tried to prevent what they predicted from happening but Wells was more like Cassandra, issuing warnings that made folks think ... but that were nevertheless ignored until he proved right," Brin said.

In that, he failed. He died in 1946 after watching World War II make him a prophet.