Speakers set on bars inside the windows cancel out unwanted noise, using technology similar to that in noise-canceling headphones.
Image 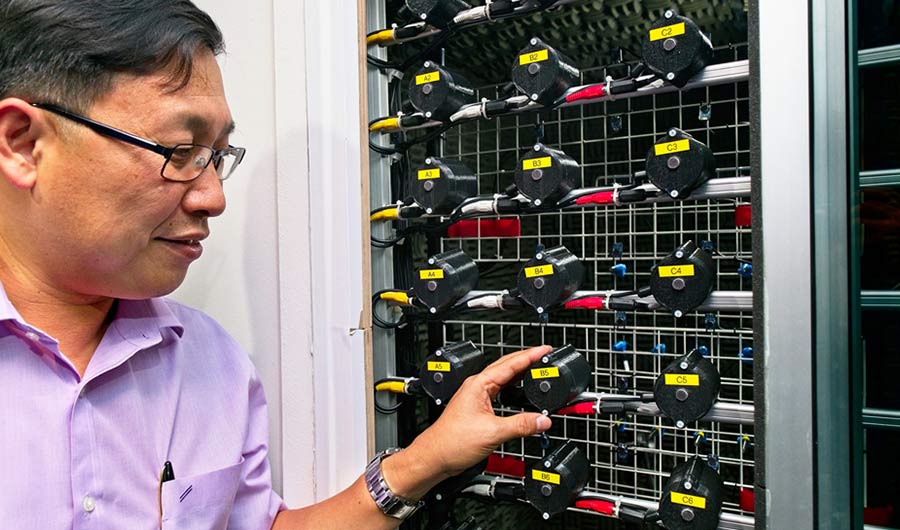 (Inside Science) -- A device that acts like noise-canceling headphones could help reduce the din from open windows, a new study finds.

The new invention consists of 24 loudspeakers, each 4.5 centimeters wide, fixed in a grid pattern to bars attached to the inside of a window, plus a microphone outside the window. If the microphone detects noise from outside the building, the loudspeakers immediately emit "anti-noise" -- sound waves with an inverted pattern of peaks and troughs compared with the incoming noise. This anti-noise cancels out the incoming sounds, reducing the volume of noise pollution entering the room, even when the window is open.

To test the device, researchers placed it in a two-panel domestic sliding window one square meter in size and played sound clips of road, train and aircraft noises from a loudspeaker 2 meters away. Using 18 microphones inside the room, they found the device reduced the volume by roughly half for noises with a frequency above 500 hertz, a range that includes traffic and train noises. This outperforms the acoustic insulation that a fully shut single-glazed window would provide, they noted.

The researchers did caution their device worked poorly against lower-frequency sounds, such as noise from aircraft or electric transformers. These sounds have larger wavelengths, and combating them would require bigger loudspeakers that would obstruct both the views and airflow through the windows, somewhat defeating the purpose of the device. The active noise control technique is also ineffective for frequencies higher than 1,000 hertz, a range that includes birdsong and human voices.

Still, previous medical research has suggested that decreasing noise pollution by half might lead to a 7% to 17% decrease in associated health risks, the researchers noted. The noise-canceling devices could get fitted onto the kind of security bars common on windows throughout Southeast Asia.

"We hope that this active noise control system encourages the increased adoption of natural ventilation without the drawback of increasing noise exposure in cities," said study lead author Bhan Lam, an acoustic engineer at Nanyang Technological University in Singapore.

The device is currently optimized for sounds that do not change too much over time. It could work for less predictable noises, such as construction machines, although more complex processing is needed for that, Lam said.

The scientists are now planning field tests of their device in real-world settings. They detailed their findings online July 9 in the journal Scientific Reports.