Some "magic spiders" seduce moths to their webs using pheromones.

(Inside Science) -- Andy Warren spent the summer of 2014 driving around the country with a pair of "magic spiders." Warren, senior collections manager for the McGuire Center for Lepidoptera and Biodiversity at the Florida Museum of Natural History, calls the spiders magic because of the way they seduce moths into their webs. He is trying to find the limits of their influence.

I joined Warren on an outing to the Uinta National Forest in Utah last July. As we set out across the sagebrush meadow, he told me about the moths we were hunting.

"They're white, about three inches across from wingtip to wingtip, and they fly like a bat out of hell. So people who like to collect these moths have a hard time," he said. "Traditionally, the best way to get these moths is to go out and find caterpillars, raise the caterpillars, get lucky and have a female moth hatch out at the right time. Then you can take the virgin female in a cage like this, and she attracts male moths."

We didn't have a virgin moth. Instead, we had a spider who, despite being female, was called Larry. The white mesh of the cage obscured her from my view, but I could just pick out a shadowy figure, like a splayed, gnarled hand.

Warren first noticed that spiders like Larry are special in June of 2013. To enter his house in Florida that spring, you had to walk underneath two spiders on webs that stretched above the door, and past a sign that read "please do not disturb the spiders."

At first, Warren left the spiders because he thought they were cool. But as he was sweeping his porch one morning, he noticed something unexpected, a pile of moth carcasses.

"I had never seen that species of moth before in my yard. And you know I'm looking at butterflies and moths in my yard all the time," he said.

This is an understatement. Warren is in charge of one of the largest butterfly and moth collections in the world at the Florida Museum of Natural History, and he is a former president of The Lepidopterists' Society. The New York Times once called him "Lord of the Butterflies." 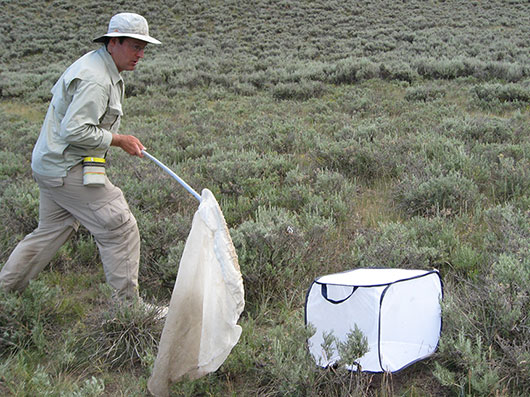 Warren's porch guests were yellow garden spiders, Argiope aurantia, and they had settled above the door to take advantage of bugs attracted to the porch lights. But that June morning, Warren found about a dozen male clear oakworm moths (Anisota pellucida) drained of their juices and discarded under the webs. Clear oakworm moths fly during the day, so they wouldn't be attracted to porch lights. Normally, they fly in the canopy of the tall oaks around Warren's house, never descending to porch level. So what were they doing under the webs?

As Warren pondered this, an oakworm moth zipped over his head and plunged into one of the webs. Later, Warren watched from the street as moths sped through the canopy fifty feet up, then abruptly changed course and descended to their doom. The two spiders attracted up to 20 moths per day, all of them male. Warren guessed that the spiders were mimicking chemical signals that attract male moths to females.

Many male insects locate mates by following chemical signals, or pheromones, produced by females. Warren's spiders are not the first to hijack this system. Bolas spiders are known to wait until they hear a moth's wing beats, then produce a sticky glob that smells like moth sex to lure their prey closer. The spider flings its glob when the moth comes in range, then reels in its meal on a silken thread.

Female spiders in the Argiope genus, which includes yellow garden spiders, catch prey in circular webs one to three feet across. For decades, bug researchers have passed around "urban legends" of these spiders attracting moths, according to Warren. Such tales surface as anecdotes or tiny hand-written notes pinned beneath specimens. A one-page research note published in 1979 described the phenomenon in three species of spider, including the yellow garden spider. But until now, no one has investigated how the attraction works or how many species are involved.

"Andy is in a position to give us the big picture," said Richard Peigler, a biology professor at the University of the Incarnate Word in San Antonio, Texas, who studies the moths Argiope spiders attract.

Across the Country with Net and Spider

When Warren first noticed the spiders on his porch attracting moths in 2013, he already knew the rumors. But his spiders were attracting a kind of moth that had never been seen approaching spiders before. Past reports mentioned various species of sheep moth in the Hemileuca genus, which are in a separate subfamily from the clear oakworm moth. Warren wondered if his spiders, so adept at attracting oakworm moths in Florida, would attract sheep moths if he brought them to other parts of the country.

They did. In the summer of 2014, Warren found spiders on his porch again. So, he put two of the spiders in cages about size of cat carriers and took them on a road trip. Three kinds of sheep moths descended on the spiders at sites in Utah and Colorado. Sometimes the spiders were engulfed in fluttering clouds, with up to six moths landing on a cage at once.

Warren is sure the spiders are producing a substance that mimics the smell of a female moth. He can predict which moths will catch the scent by how the wind is blowing, and when the moths approach, they behave like males about to mate.

"Their genitals are hanging out and they're ready to copulate with anything they come in contact with," said Warren. "The males even try to copulate with each other when theyrre meeting on the cage, because they're just so overwhelmed."

He wants to gather as much data as possible about which spiders attract which moths. Most moths only fly in search of mates for two to three weeks a year, but the timing depends on the species and population, so he spent the summer scrambling to get his spiders to the right place at the right time. Now the yellow garden spiders that hatched in the spring are dying off, but Warren has collected spiders of two related species that are active in the fall. He's planning a trip to Georgia, and he has colleagues across the country who are poised to bring spiders to the field.

"My guest bedroom is full of nothing but spiders," Warren said on October 22. "People told me I should rent out my house for Halloween."

Warren plans to publish his field research this winter. Next summer, when the moths and spiders are active again, he will team up with biochemists, including Steve McElfresh, a research associate at the University of California, Riverside, to see exactly what the spiders are producing.

The researchers will separate the different chemicals wafting from spiders and puff them over an amputated moth antenna hooked up to an electrical amplifier. Moths smell with their antennae, and even amputated antennae can send electrical signals when they sense pheromones, according to McElfresh. These signals should tell the researchers which chemical the moths are attracted to.

McElfresh has already used this technique to analyze pheromones produced by female sheep moths. Male moths only respond when the chemical is exactly right, so the spider's lure is likely to match one of the chemicals McElfresh has studied before.

Eventually, Warren hopes to discover whether the chemicals that are attracting moths to spider webs are the same ones the spiders use to attract their own mates. This will shed light on how the spiders' abilities might have evolved.

Warren is studying moths and spiders that live in North America, but those animals have dozens of relatives across the globe, and Warren wishes he had the resources to test them all. There could be many more examples of cross-species chemical trickery. 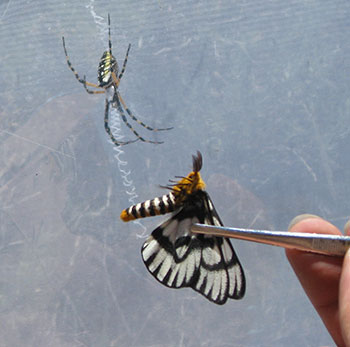 A love-struck sagebrush sheep moth is held before the object of its desire, a yellow garden spider named Larry.

When I visited a sagebrush meadow with him last summer, Warren spotted one unsuspecting moth before he had even set the spider down. Eventually, I saw it too: a distant white speck fluttering along the ground with deceptive speed. The moth caught the scent and turned sharply, zigzagging toward us while Warren yelled encouragements. It banged against the mesh for a few seconds, then sped away and vanished against the sagebrush.

When the moth was out of sight, I bent down beside the cage and peered through the clear plastic window to get my first good look at Larry. She was huge, splayed motionless over a thick white zigzag that decorated the center of her web. Her legs were arranged in an X, rising in pairs from her body, descending through knobby joints to rest delicately on the threads. Her abdomen looked like a Faberge egg, covered in intricate patterns of gold and black.

More moths flew in, and Warren caught them in his net and tucked them away in envelopes. At one point, he let a particularly eager moth approach in peace so I could watch. The moth settled on the mesh right above Larry.

"That moth is trying its hardest to [mate with] the spider. I mean, that’s exactly what’s going on," said Warren. “Under any normal circumstances, you have a hard time getting within 20 feet of these things. But he's just -- oh, he's so…" Warren reached down and gently plucked the delirious moth off the cage.

Nala Rogers is a science writer based in Santa Cruz, California. She tweets at @Nala_Rogers.