Collisions in space may be behind mysterious diamonds found in meteorites.
Image 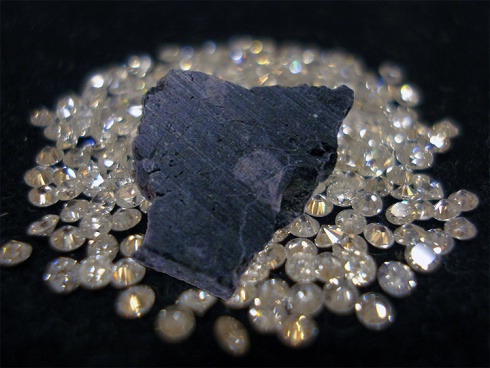 (Inside Science) -- Space diamonds may now be an astrophysicist's best friend.

For years, scientists have found DNA-sized diamonds in meteorites on Earth. New research suggests that these diamonds spring from violent cosmic collisions, which may help scientists unravel mysteries surrounding exploding stars -- the birthplaces of ancient materials that predate our solar system.

Although diamonds are rare on Earth, scientists believe that minuscule "nanodiamonds" abound in space. Researchers have been trying to decipher the origin of these enigmatic minerals for decades.

On Earth, traditional diamonds are forged deep underground under intense heat and pressure over the course of billions of years. Space diamonds, however, can form in a millionth of a millionth of a second according to new research appearing in the journal Physical Review Letters.

"The transformation is quite astonishing," said Nigel Marks, a materials scientist at Curtin University in Perth, Australia, and coauthor of the research paper. "I never would have imagined this was possible."

When the carbon onions slammed into each other, the molecules flattened, squeezed and linked together. During this process, the onions rearranged themselves into hexagonal shapes indicative of diamond structure.

"They found that there's sort of a sweet spot," said Andrew Davis, a geochemist at the University of Chicago, who was not affiliated with the research. "If you can do it just right, you can make nanodiamonds. That was interesting."

With this new model for nanodiamond formation, scientists hope to unlock some of the secrets these diamonds contain. Until now, scientists have only extracted limited information from nanodiamonds partly because they didn't have a suitable theory for their formation, said Marks.

"There's a huge message embedded in the nanodiamond," said Marks. "[Researchers] just couldn't figure out what it was."

Forms of elements such as gaseous xenon with different amounts of neutrons have been found inside meteorite nanodiamonds. Called isotopes, these variants of the same elements convey information about exploding stars from earlier in the universe's history. Different ratios of isotopes are produced in different nuclear reactions, giving scientists clues as to what types of dying stars gave birth to these isotopes.

According to Marks and his team, xenon is likely incorporated into carbon onions before they collide and produce nanodiamonds. By better understanding where these embedded isotopes originate, scientists can glean new information about the death of stars and the origins of our solar system.

Several competing theories, however, suggest nanodiamonds were formed differently than Marks' research indicates. For instance, some scientists think that shock waves from exploding stars may have created nanodiamonds. Intense pressure and heat from the shock wave could also have led to the implantation of noble gases like xenon.

But all theories put forth so far have been hampered by limited experimental evidence. Because nanodiamonds are so small, it's been extremely difficult to look at them individually.

To help resolve this issue, Marks and his colleagues hope to translate their simulations into lab experiments in the coming months. By creating nanodiamonds on Earth, the research team could produce large enough samples to analyze.

The samples could also be used for biomedical and industrial applications.

Manufacturers already create similarly sized nanodiamonds to use as drug markers or dry lubricants. Current methods require extremely high temperatures, though, limiting the types of materials that can be coated. Using the method put forth by Marks and his team, manufacturers could create coatings for materials that melt relatively easily, such as steel.

High speeds on such a small scale can be tricky, however.

"I think it's probably not trivial to accelerate these grains to 5 kilometers per second," said Davis. "That's a hard thing to do in a lab."

Nonetheless, Marks hopes that his simulations will guide future experiments.

"Now that we know this possibility exists, we want to go on and figure out what you can do with it," said Marks.

Brian Jacobsmeyer is a contributing writer to Inside Science News Service