The experimental technique could help reveal the fundamental chemistry in photosynthesis and photovoltaic materials.
Image 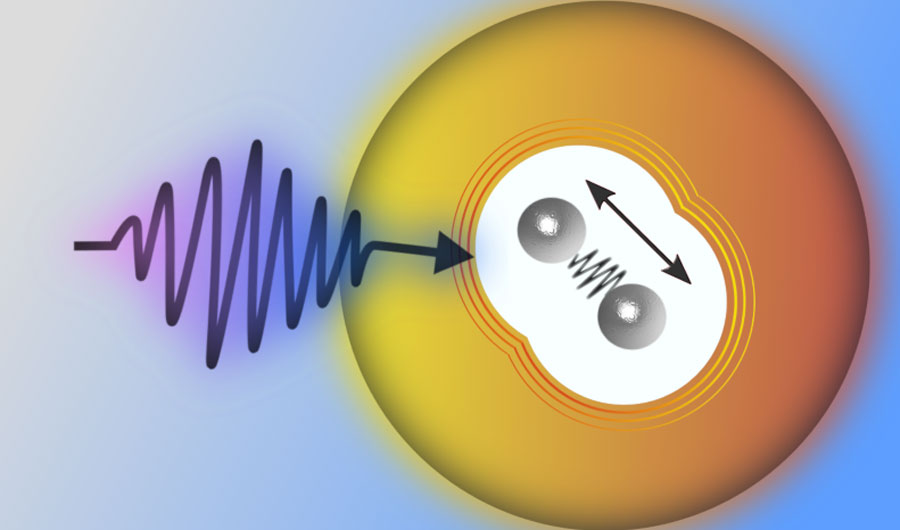 This image may be reproduced with this Inside Science article.

(Inside Science) -- By suspending a single molecule consisting of just two metal atoms in a tiny droplet of liquid helium, physicists have demonstrated a new way to study the ultrafast vibrational dynamics of molecules. The technique may help researchers develop high-performing organic photovoltaic materials for future solar cells.

Popping a bottle of helium “champagne”

The technique involves three main steps. First, extremely cold helium gas was pushed, at supersonic speed, through a tiny nozzle just 0.005 mm (.0002 inches) wide that had been cooled to 15 kelvins (-433 degrees Fahrenheit). The nozzle then shot the high-pressure helium gas into a vacuum chamber, turning it into a mist of nanodroplets.

“When the high-pressure gas goes from high pressure into a vacuum, it expands, and during this expansion the gas cools down and condenses into droplets,” said Markus Koch, a physicist from the Graz University of Technology in Austria who was part of the team behind the new technique. “You know, you may have seen it when opening a bottle of champagne.”

The second step was to prepare the indium metal the researchers wanted to study. To do this, they simply heated a vial of indium until it started to steam. The “steam,” made of indium vapor, was sprayed with the supercooled helium nanodroplets straight from the “champagne bottle.”

The scientists tuned the system until each nanodroplet was capturing, on average, two indium atoms. The hot atom pairs, once immersed in the nanodroplets, were cooled by the 0.4 kelvin liquid helium and linked up as indium dimers – dumbbell-shaped molecules consisting of two indium atoms.

The final step was to measure the dynamics of the dimers as they jiggled inside the nanodroplets. This was done by shooting the mist with a laser, which excited the molecules and caused them to emit electrons that were measured by detectors lining the chamber wall. 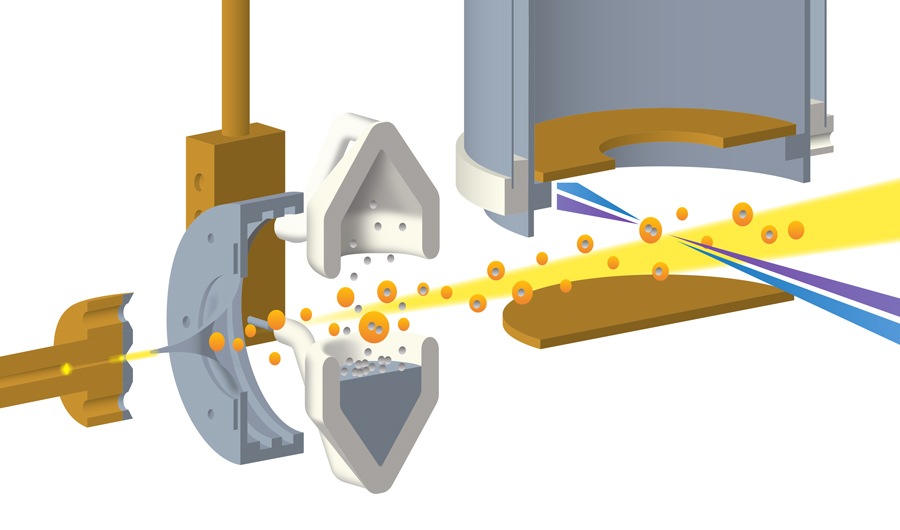 Rights: This image may be reproduced with this Inside Science article.

The researchers described their technique in a paper published in Physical Review Letters.

A quadrillionth of a second

The method was able to detect the emitted electrons with femtosecond precision, down to a quadrillionth -- or one part out of 1015 -- of a second.

The ultrafast measurement was enabled by the laser setup using a technique known as pump-probe spectroscopy, where a strong light beam is first used to excite, or “pump,” the sample, and a subsequent weaker beam to monitor, or “probe,” the changes induced by the pumping beam. While pump-probe spectroscopy is not a new technique, nor is the technique used to produce the helium nanodroplets and the indium vapor, the experiment is the first to put all these things together.

According to Henrik Stapelfeldt, a physicist from Aarhus University in Denmark not involved in the research, the decision to use liquid helium as the solvent, in particular, is an important breakthrough.

A new way to study chemistry

“If you want to measure the electrons inside a droplet, they need to be able to make their way out of the droplet into the detector,” said Stapelfeldt. “People have looked at other solvents, for example, water or methanol, but the thing with these solvents is that it's difficult to extract information from them.”

“In conventional solvents like water or methanol, the signal would only last for maybe one to two picoseconds,” said Koch. In comparison, helium, an inert element that’s a superfluid with zero viscosity in its liquid form, allowed them to observe the vibrating molecules for at least hundreds of picoseconds.

“That’s the nice thing about this experiment. They were able to ionize the molecules, and then measure the electrons, which are extremely informative experimental observables,” said Stapelfeldt. “This is typically not possible in normal solvents and people have to then rely on other experimental techniques.”

The new technique may help overcome some of the limitations in previous experimental methods. For example, one similar technique premixes the subject of interest -- in this case the indium dimers -- with the solvent before pushing both through the nozzle.

“That method is fine for studying metal atoms for example, but if you want to investigate something that's relevant for light harvesting or biological systems, in other words, larger molecules, it wouldn’t work,” said Koch.

“What we’ve done here is a proof-of-principle experiment,” he said. “If you're interested only in studying indium dimers, it’s possible to do it some other way. But the hope is for others to use this method we’ve developed to study many other systems.”

Those systems could include biological molecules, or organic photovoltaic materials used in flexible solar cells that are cheaper and more durable than common silicon solar panels. A more thorough understanding of the electronic and vibrational properties of these materials is fundamental to the development of their related technologies.

“The technology was all there, but putting everything together is always a challenge,” said Stapelfeldt. “This does not look like an easy experiment.”