Rare fossil with its feathers intact found in Wyoming.
Image 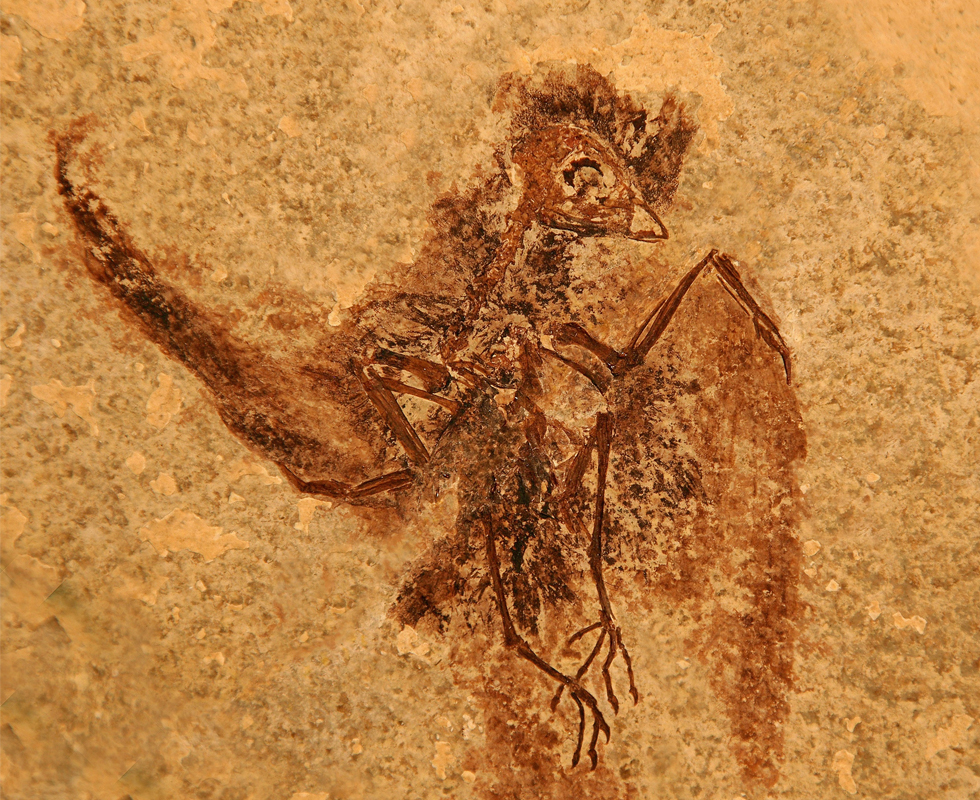 E. rowei was an evolutionary precursor to the group that includes today's swifts and hummingbirds.

Lance Grande of the Field Museum of Natural History

(ISNS) -- Of all the world's birds, swifts and hummingbirds stand out for their incredible flying abilities. They once had a common ancestor.

Researchers have discovered a 50-million year old fossil in Wyoming that isn't that common ancestor, but a closely related small bird that branched off the same line as the two phenomenal fliers and had characteristics that relate to the remarkable flight abilities of the two birds.
Meet Eocypselus rowei, a bird about four-and-a-half-inches long, probably black, and possibly iridescent. It would fit in the palm of your hand and weighed less than an ounce.
The bird was found with most of its feathers preserved, fairly rare in bird fossils.
"This particular lineage went off on its own direction, survived a couple of million years--even made it to Europe--and ultimately died out without leaving any descendants," said Daniel Ksepka of the National Evolutionary Synthesis Center in Durham, North Carolina. "The other side of the fork led to swifts and hummingbirds."
The bird lived in the time after dinosaurs but before humans. The lineage was traced by comparing the fossil to extinct and current birds.
Ksepka and his colleagues from the University of Texas at Austin have a paper in the current issue of the Proceedings of the Royal Society B.
The fossil was found under some rocks at the Green River Formation, in a dry lake bed 60 miles across in southwestern Wyoming, where thousands of fossils of all kinds have been found.
"There are tons of fossils," Ksepka said, "insects, vines, palm leaves, crocodiles, turtles, fish, fish eating fish, fish in the process of swallowing other fish." The organisms died, sank to the bottom of the lake and if they were not eaten, became fossils.
The fossil was examined at the Field Museum of Natural History in Chicago and named for John Rowe, chairman of the Field's Board of Trustees.
What makes hummingbirds and swifts unique is what they can do in the air and the remarkable amount of time they spend doing it. They are members of an order called apodiformes, meaning they have very little feet.
"They are the most aerial of all birds," said Kimberly Sue Bostwick, a research associate in ecology and evolutionary biology at Cornell University in Ithaca, N.Y., who was not involved with Ksepka's research. "They are most adept at acrobatics."
Swifts have very tiny feet. For years, most people thought they had none at all, but they have little hooks they can use to grab on to things for sleeping or nesting, the only time those birds are not in the air.
"You never see one on the ground unless it's dead," she said. They can't even take off without the help of wind or gravity.
Swifts zoom around with their mouths open catching insects out of the air, she said. Since there is not much nutrition in insects, they spend all their time catching them.
Hummingbirds can hover unassisted by wind currents, drinking nectar from flowers, the hardest thing a bird can do. They also are never seen alive on the ground, Bostwick said.
Both birds use up huge amounts of energy; burning through calories as they fly and eat.
Ksepka said the feathers on the fossil allowed the researchers to see the shape of the ancient bird's wings.
Hummingbirds have short wings relative to their bodies while swifts have very long, narrow, pointy wings. E. rowei has wings halfway between the two, which meant E. rowei probably didn't hover and would not have been as swift as, well, a swift.
Judging by the shape of its beak, it also ate insects.
The size of the fossil would indicate that the ancestors of swifts and hummingbirds evolved to be small before they gained
their unique flying characteristics, Ksepka said.
Usually, fossils of birds consist of skeletons or just bones, but this one had most of its feathers intact.
The researchers at the Field Museum used a scanning electron microscope to look at the fathers and found carbon residues of tiny cellular organisms called melanosomes, which were once thought to be the remains of bacteria that fed on the feathers. It is now known they contain melanin, pigments that give the feathers color.
"It is reasonably likely these birds were black," Ksepka said, "and possibly shiny."
Filed under
Animals
Animal behavior
Biology
Earth
Geology
Author Bio & Story Archive