Scientists use data from the New Horizons mission to illuminate the mystery.
Image 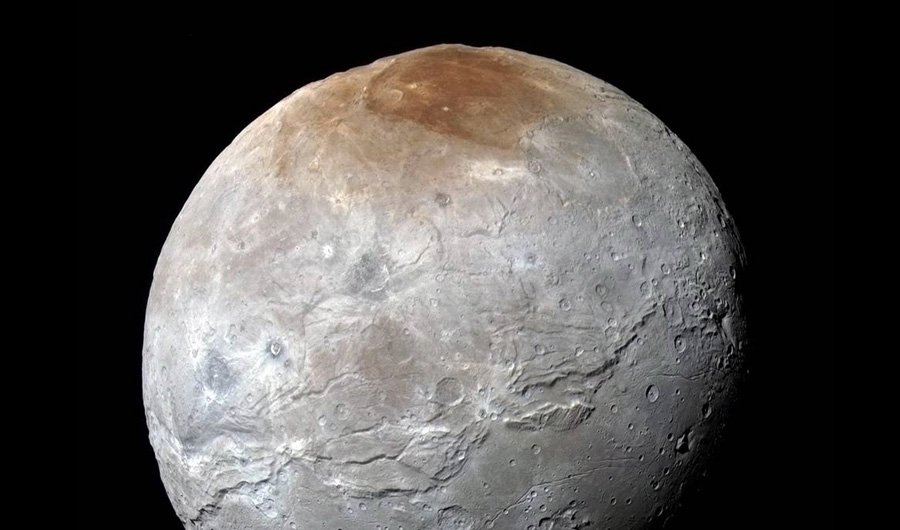 (Inside Science) -- When the New Horizons spacecraft approached Pluto in July 2015, many astronomers largely expected that a peek at Pluto's largest moon Charon would be uneventful. Unexpectedly, scientists found that Charon possessed a giant red cap on its north pole unlike anything else seen in the solar system to date. Now, researchers may have discovered how Charon got this dark spot: fumes from Pluto painted the moon's surface.

Charon is by far the biggest of Pluto's five known moons. At roughly 1,200 kilometers wide, Charon is nearly half the diameter of Pluto, making it the largest moon in the solar system compared to its host.

NASA's New Horizons discovered that Charon had a huge dark red cap on its north pole. If Charon were Earth, the red cap would probably cover a large portion of the northern hemisphere, extending south from the North Pole to at least 50 degrees north latitude, or roughly as far as the U.S.-Canada border or the English Channel. Hints of the cap could appear about as far south as Mexico City or the Red Sea, said study lead author Will Grundy, a planetary scientist at the Lowell Observatory in Flagstaff, Arizona.

"This is the only case known so far in the solar system where we've found a satellite or an atmosphere-less body with polar colorations on it of the strong nature that we see on Charon," said research astronomer Larry Trafton at the University of Texas at Austin who did not take part in this study. "It was pretty much a surprise -- we expected Charon to be a blander object than it turned out to be."

Similar colors on Pluto's surface are probably due to organic molecules known as tholins, named after the ancient Greek word for sepia ink. These compounds arise from chemical reactions between methane and nitrogen. "They are chemically the same stuff as the smog that used to fill Los Angeles basin -- they have an orange tint to them," Grundy said.

Scientists previously speculated that methane and nitrogen escaping from Pluto's atmosphere got trapped by Charon's weak gravity, frozen at its cold poles, and slowly converted to tholins over time. However, until now, there were no rigorous models supporting this scenario.

To solve the mystery, Grundy and his colleagues first modeled how much gas might escape Pluto. Methane and nitrogen currently escape from Pluto at rates of 1.3 kilograms and 4 grams per second, respectively, as estimated from New Horizons data. Methane is the lighter molecule, so it is the main one escaping.

New Horizons scientists estimated that Charon intercepts about 2.5 percent of these molecules. The scientists developed models of Charon's surface temperatures that suggest Charon's winter pole -- the pole facing away from the sun -- would get cold enough for nitrogen ice to grow there at a rate of about 0.2 microns per decade, and for a layer of methane ice roughly 0.3 microns thick to accumulate at each pole of Charon during winter. (Pluto's year is 248 Earth years long, and its winter lasts more than a century.)

The researchers' calculations suggested that solar ultraviolet light striking Charon would convert material from Pluto into tholins. When Charon's winter poles reemerge into the sunlight, the nitrogen and methane ice would rapidly disappear, but the heavier, less volatile tholins would remain behind, with about 30 centimeters accumulating at Charon's poles over a billion Earth years.

"The calculations in the paper are simple back-of-the-envelope ones," Grundy said. "For every one of them, the numbers seem to add up. That doesn't prove anything, but this idea has seemed to survive the tests we've thrown at it so far."

The model suggests that Charon's south pole should also possess a red cap. Although Charon's south pole is currently in winter night, images of that moon's southern hemisphere lit by "Pluto-shine" -- that is, the scant amount of sunlight reflecting off Pluto -- that Grundy and his colleagues analyzed reveal that there is evidence of darkening toward the south pole, suggesting a red cap there as well. "I think it's interesting that each new place we look we find new phenomena," Grundy said.

Planetary scientist Bob Johnson at the University of Virginia in Charlottesville, who did not take part in this research, said these findings join increasing discoveries of the transfer of materials between bodies in the solar system, such as between Jupiter's moons Io and Europa, and from Saturn's moon Enceladus to other Saturnian moons.

"It will also be interesting to see if similar features show up in other outer solar system bodies, like on Eris's satellite Dysnomia, or the recently discovered satellite of Makemake," Grundy said.

Future research should develop more detailed models of Pluto and Charon to rigorously test this scenario further and "make more detailed predictions about how the red stuff ought to be distributed," Grundy said.

The scientists detailed their findings online Sept. 14 in the journal Nature.