Yoshinori Ohsumi revealed the workings of autophagy, a routine biological process implicated in many diseases. 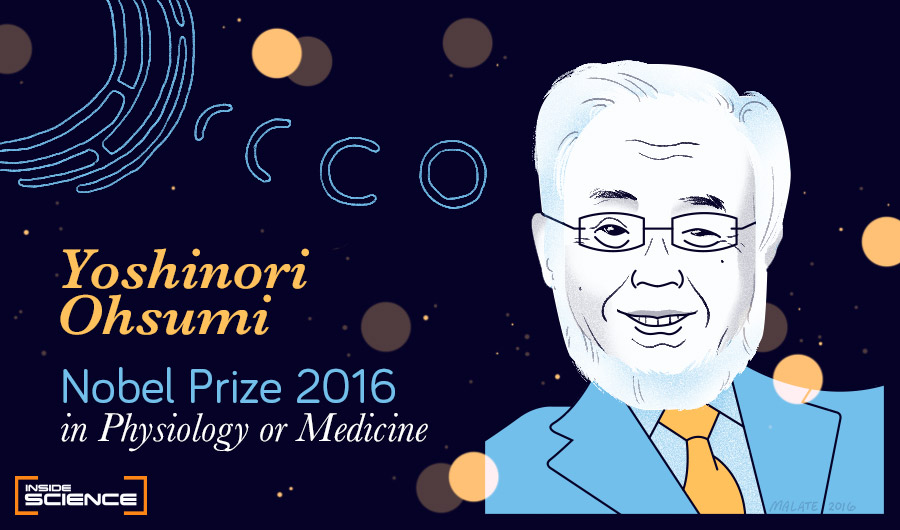 (Inside Science) -- The 2016 Nobel Prize in physiology or medicine has been awarded to Japanese cell biologist Yoshinori Ohsumi of the Tokyo Institute for Technology for his discovery of how cells break down and recycle their own proteins and organelles, a process called "autophagy."

The fact that cells could break down and re-use their own components was first observed in the 1960s -- in fact, Belgian biochemist Christian de Duve was awarded the 1974 Nobel Prize in physiology or medicine for his discovery of the lysosome, the cellular compartment where the breaking down happens. He also coined the word autophagy, which is Greek for "self-eating."

But it wasn't until Ohsumi's experiments with baker's yeast in the 1990s that scientists began to understand how autophagy works. He discovered the genes involved in regulating autophagy and uncovered the detailed biochemical mechanism of the process.

Before that time, Nobel committee member Juleen Zierath said in an interview presented on the Nobel website, "the machinery was unknown, how the system was working was unknown, and whether or not it was involved in disease was also unknown."

Autophagy allows cells to recycle unneeded or worn-out pieces of themselves and helps deal with infections by destroying bacteria or viruses. It also helps organism cope with starvation by recovering nutrients. The cell encloses the items to be destroyed in a membrane-bound sac called an autophagosome and transports them to a special recycling compartment in the cell called a lysosome, where the molecular cargo is broken down and re-used.

When the process isn't working properly, it can lead to diseases, including cancer, Parkinson's, and Type 2 diabetes. Mutations in a gene involved in autophagy have even been linked to the transmission of the Ebola virus.

"Without autophagy, our cells won't survive," said Zierath. "We need autophagy to ward off invading molecules, to deal with very large proteins that might be long-lived or perhaps defective. So we need to be able to have autophagy to degrade proteins. But we also need autophagy for renewal."

In the late 1980s, while an assistant professor at Tokyo University, Ohsumi began studying autophagy in bakers' yeast, which is easier to experiment on than human cells. He focused on an organelle called the vacuole, the yeast version of the human lysosome. First he had to determine whether autophagy actually existed in yeast. To find out, he cultured yeast cells that were missing the genes that produce the enzymes to break down the contents of the vacuole, and then he starved the cells to induce autophagy. Within hours the vacuoles were filled with autophagosomes waiting to be digested, proving that the yeast also used the recycling process.

Ohsumi then looked for the genes that control autophagy by introducing thousands of random mutations into his yeast strains. He reckoned that if he could find mutant strains in which the accumulation of autophagosomes was halted, it would be because the mutations disrupted genes essential to the process. Using this method he identified 15 different genes that regulate autophagy, and he showed how they worked together in a molecular cascade to initiate and regulate the formation of the autopagosomes.

Ohsumi and others soon showed that the molecular and genetic pathways governing autophagy in human cells was virtually identical to those in yeast. Andrea Ballabio, a molecular geneticist at the Telethon Institute of Genetics and Medicine in Naples, Italy who studies the lysosome, said Ohsumi's work has paved the way for a greater understanding of how problems with our cellular recycling process responds to aging, starvation, infection and a variety of genetic diseases.

“Ohsumi's discovery of the autophagy pathway has really changed our understanding of cell functioning and has opened the way to the development of completely novel therapeutic strategy for many diseases,” he said.

Defects in autophagy that lead to the accumulation of cellular debris can cause severe dysfunction, especially in neurons which seem to be particularly vulnerable to the effects of a breakdown in the recycling system, said Ballabio. But some types of cancer rely on active autophagy to support their high metabolic needs.

"An important goal for the future is to identify methods and tools to modulate, by either stimulating or inhibiting, autophagy in a variety of disease conditions," he said. "This type of therapy would have a very broad impact in medicine."

This is the first time since 2010 that the physiology or medicine prize has been awarded to a single researcher, a fact that Ohsumi found surprising, he told Nobel Media. “That's my real surprise because so many people are now working in the autophagy field,” he said.

When he started, it was not an area of great interest. Steven Walkley, a neuroscientist at the Albert Einstein College of Medicine in New York, said that the indiviudal prize is not really surprising, because Ohsumi's work on yeast led to an explosion of work on autophagy in recent years. “Now many of us work on autophagy as part of our everyday efforts in whatever area we're working on,” he said.

But there is much more to learn, according to Ohsumi. “Still we have so many questions. Even now we have more questions than when I started,” he said.

Editor's Note: Inside Science also released a brief story shortly following the announcement of the 2016 Nobel Prize in Physiology or Medicine. That story can be found here. All of our coverage of the 2016 prizes is available here.

Researchers Study Violinists To Learn How Humans Act in Synchrony
Alligators May Be Able to Survive Venomous Snake Bites
New Theory Says We’ve Been Wrong About How Bubbles Pop
Crustacean Genes May Solve Debate Over How Insects Evolved to Fly
Some Beetles Survive Being Eaten, New Study Finds
END_OF_DOCUMENT_TOKEN_TO_BE_REPLACED

COVID-19 Vaccine, Sharks and Mezcal
Crabs Use Belly Sounds To Communicate
Touring The Trinity Test Site
Protests, A Retracted Paper, and a Super-Earth Planet
Why Is an Empty Shampoo Bottle So Easy To Knock Over?
END_OF_DOCUMENT_TOKEN_TO_BE_REPLACED