They release "mobile grenades" -- tiny balls of stinging cells that are shaped like popcorn and can swim under their own power.
Image 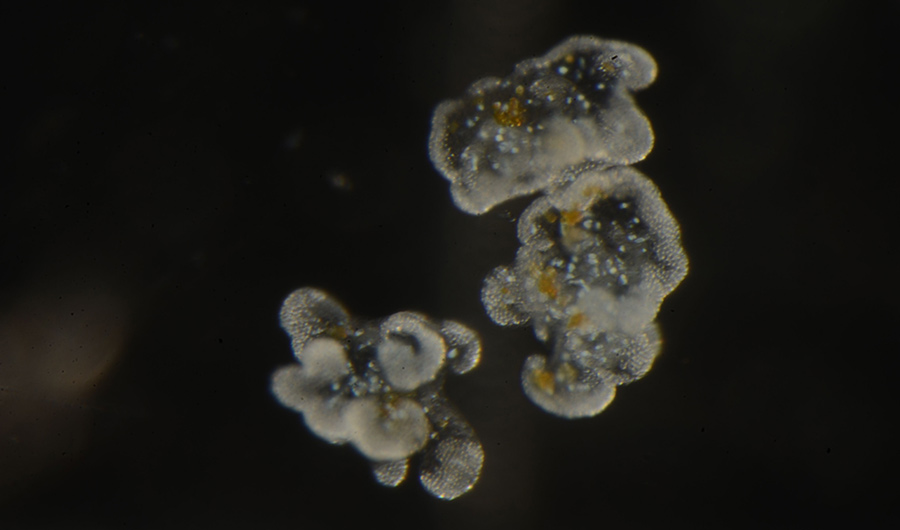 These popcorn-shaped objects are tiny balls of jellyfish cells called cassiosomes. The white dots on the outer edges of the lumps are stinging structures called nematocysts. The brownish circles in the middle are symbiotic algae.

(Inside Science) -- In tropical waters amid the tangled roots of mangroves, there are places where the water itself can sting. At least, that's how it seems to human swimmers, who may leave such places covered in rashes despite taking care not to touch anything.

The culprit behind so-called stinging water is a type of jellyfish that spends most of its time upside-down on the ocean floor. When these jellyfish feel disturbances in the water, they release large amounts of mucus. Now, researchers have discovered that the mucus is full of tiny defenders that can swim under their own power and survive for up to 10 days.

Jellyfish sting using microscopic harpoonlike structures called nematocysts. Nematocysts can sting even when removed from the jellyfish, so marine biologist Allen Collins had long assumed that stinging water was caused by nematocysts floating loose. But when Collins, biologist Cheryl Ames, and their colleagues examined jellyfish mucus, they saw something much more complex.

"They are these little sort of lumpy asteroid-shaped things, and all the protruding bumps are loaded with nematocysts. And so it was sort of obvious instantaneously, 'Ah! that's what happens. That's how they do it,'" said Collins, who works at the Smithsonian National Museum of Natural History and the National Oceanic and Atmospheric Administration in Washington.

In a paper published today in the journal Nature Communications Biology, the researchers named the structures "cassiosomes" and likened them to mobile grenades.

An upside-down jellyfish at the National Aquarium in Baltimore. When disturbed, these jellyfish produce mucus containing stinging balls of cells called cassiosomes.

In addition to nematocysts, cassiosomes are covered in whiplike structures called cilia. The cilia propel cassiosomes on a slow, bumbling dance through the water. It's not yet clear what purpose these movements serve, said Collins.

The researchers suspect that cassiosomes help defend upside-down jellyfish from predators. They may also help the jellyfish hunt, as any small creatures killed by cassiosomes would likely fall onto the jellyfish's frilly oral arms.