Two gangs flow ivory from the wild to Mombasa, and then to the market.
Image 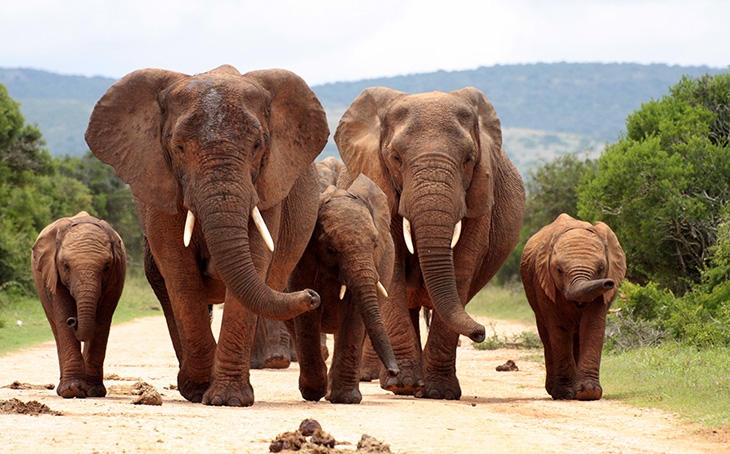 About 50,000 elephants are slaughtered for their ivory each year. The African population of the world’s largest land mammal is now fewer than half a million.

(Inside Science) -- Scientists using modern DNA techniques are uncovering the secrets of the illegal ivory trade -- locating the killing fields of elephants, showing where their ivory travels to, and how crime syndicates have organized poaching.

At the meeting of the American Association for the Advancement of Science in Washington, D.C., experts described how wildlife crime has become the fourth largest organized crime operation in the world, after guns, drugs, and human trafficking, and that illegal ivory sales account for $3 billion of the $20 billion in revenues collected by crime syndicates.

With about 50,000 elephants a year being slaughtered for their ivory, the African population of the world’s largest land mammal is now fewer than half a million.

Techniques developed by Samuel Wasser, a conservation biologist at the University of Washington, Seattle, have made it possible to trace the ivory to its origin. Normally, DNA is extracted from animal dung, tissue, or hair in the wild. Wasser, however, found a way to extract DNA directly from the tusks themselves, which has greatly improved the ability to track whether ivory confiscated in Kenya came from Gabon or Tanzania, for example.

Wasser and his colleagues published some of the results of their studies in the journal, Science, last summer and revealed additional findings at the AAAS meeting.

His lab initially analyzed 28 caches of ivory seized by governments. By comparing the ivory DNA to elephant DNA records, he found that most of the ivory came from two "hotspots," forest elephants from Gabon, Central African Republic and the Republic of the Congo, and savannah elephants in Tanzania, mostly the latter. All the samples he and his team examined were shipped from the Kenyan port of Mombasa.

The ivory had been taken across borders to obscure where the poaching had taken place.

Studies of an additional dozen ivory caches since the original study showed the same results.

The evidence indicates that one or two poaching gangs are involved, and that the ivory is moved quickly from one location to another, said Wasser. He told a news conference that his work has already led to the arrest of one of the dealers in West Africa, and authorities are closing in on another.

The illegal ivory trade is lucrative, and as a result, poachers are highly organized and disciplined, stalking elephants with night vision goggles and M-16 assault rifles, said William Clark, the U.S. liaison to the Kenya Wildlife Service in Great Falls, Virginia. Poachers who are caught can afford top lawyers to fight any charges.

Sixty-five wardens have been killed in Kenya, he said.

Clark, a former agent for Interpol, the international police organization, said that before Wasser’s technology, Interpol tried to trace ivory using paperwork, but they almost never succeeded. That’s because the elephants were typically killed in one country and shipped through another, and the paper trail became muddled and was often fabricated. The DNA testing now gives prosecutors evidence that could stand up in court, he said.

Allan Thornton of the Environmental Investigation Agency, a non-profit based in the U.K. said China has been getting most of the bad publicity for selling illegal ivory but that the world is ignoring perhaps the worst offender: Japan.

According to Thornton, Japan has imported the tusks of 245,000 elephants since 1970, It currently has 8,219 ivory retailers, 584 wholesalers, and 219 companies manufacturing ivory items. An undercover survey by the agency showed that 30 of 37 ivory traders offered to sell illegal ivory.

"We thought we’d get a few bad apples," Thornton said at the press conference. "Japan has received very little scrutiny," he said. No evidence whatsoever is required to prove the origin and legality of ivory in Japan.

Japan also has the two largest internet shopping sites for ivory sellers, Yahoo Japan and Rakuten Ichiba, Thornton said at the press conference Yahoo Japan, 35 percent owned by Yahoo Inc. in the US, sold $27 million worth of ivory in the last 10 years, including $7 million last year. The two sites had 6,000 ads for ivory on one day worth $5.1 million.

Officials of Yahoo Japan told the Guardian newspaper it only sells ivory harvested before it became illegal. Yahoo Inc., told Wired magazine it does not condone illegal ivory sales but has no control over what Yahoo Japan does. Thornton said they can stop selling illegal ivory any time they want to.

Most of the ivory in Japan is sold as name seals, small engraved pieces of ivory used to sign documents.

The government has shown no interest in intervening, Thornton said.

The U.S. also is an enormous market for ivory, Wasser said, with little trinkets smuggled in from China and often used for the handles of guns and knives, which means that the gun lobby intervenes. "The National Rifle Association says this is just a ploy to keep us from selling our guns,” said Wasser.

"DNA analysis is definitely up to the task of resolving a source population for ivory derived from many different areas in Africa," said Daniel Fisher, professor of paleontology at the University of Michigan Museum of Paleontology, in Ann Arbor, who is not involved in Wasser’s research. "This is important first of all for showing where the bulk of illegal ivory shipments are coming from, allowing us to target anti-poaching efforts most effectively."

Along with other forensic techniques, it can also prove if the ivory is illegal, he said.

Meanwhile, the techniques developed in Wasser’s lab, are now being used to monitor another species headed toward extinction because of illegal hunting, including the pangolin, a small anteater found around the world. Its meat is eaten and other parts are used for a wide variety of questionable medical uses.