Decades of observation and research suggest zebras may use their stripes for temperature regulation, among other functions.
Image 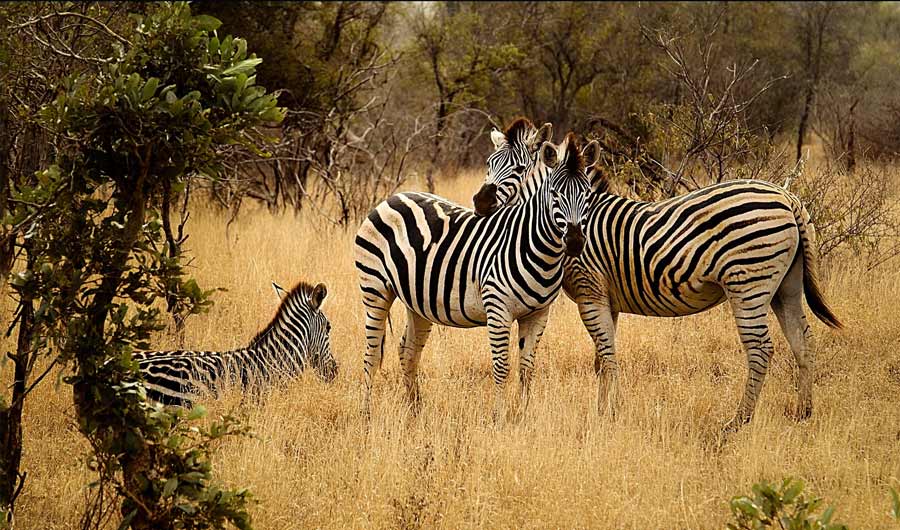 (Inside Science) -- A gangrene-inducing bite in Africa, 40 years of curiosity, and backyard experiments her daughters still complain about have all come together to tell Alison Cobb one thing: Stripes help zebras keep their cool. New research published today in the Journal of Natural History shows stripes may create air flows that give zebras a kind of natural air conditioning system that helps them ward off the blazing sun.

“It’s about thermoregulation to avoid the heat and cold,” said Cobb, a retired amateur naturalist, who conducted the research with her zoologist husband, Stephen Cobb. Other scientists argue the main reason for stripes is to deter biting insects.

When she was four years old, Cobb, now 85, first wondered about zebra stripes after reading Rudyard Kipling’s story “How the Leopard Got His Spots.” A nature documentary she watched claimed zebra stripes were a type of camouflage. But camouflage seemed a poor explanation to Cobb in light of her own observations in Africa of lions prowling up and down herds of zebras deciding which one to eat. She had also witnessed zebras spending a great deal of time grazing in the hot midday sun -- more than the antelopes which lived in the same area -- and believed the stripes might be helping them deal with the heat.

Forty years ago she did her first experiment by draping different colored felt coats on water-filled oil drums out in the sun and taking the temperature of the water inside. Without direct access to research animals, she enlisted the help of her three daughters, aged 8, 9 and 10. She made them wear rugby shirts she sewed with zebra stripes and had her “experimental animals” crawl around on their hands and knees in the sun in England.

“They still complain about it. They are now in their early 60s,” Cobb said.

But when she touched the different stripes on their backs, they could tell her which was black and which was white without seeing. But this still didn’t give her a full explanation: If the white spots were cooler, why did they have black bits at all? Plus, she knew from extensive experience with horses that the animals sweat a lot, and she was still unsure how sweat would interact with the different colored stripes.

She didn’t get the chance to get close to zebras again until her 70th birthday, when she and her husband traveled back to Africa to test her idea on a couple of captive zebras living on private ranches in Kenya in December 2003. They measured the temperatures of adjacent black and white stripes on various parts of the zebras every 15 minutes throughout the day, as well as taking ambient air temperatures near the animals. They also took similar measurements of a zebra hide wrapped around clothes in the shape of a horse left in the sun on the ranch.

The research didn’t come without casualties -- Stephen Cobb got bit by a territorial male stallion, and his wound later turned to gangrene. “He still has a scar,” Alison Cobb said.

But their research proved enlightening. They found the temperature of the black and white stripes differed greatly on the living animals, with greater differences at the hottest points of the day. The stripes on the inanimate hide had a similar difference between black and white stripes, but the highest temperatures of the black stripes were 15 degrees Celsius hotter than the peak black stripe temperatures of living zebras.

The research couple believes that these differences in temperature are enough to cause small air eddies. In the living zebras, these air flows could help to cool the zebras in the hottest times of the day by speeding up the evaporation of sweat.

The Cobbs also noted that the living zebras were able to stick their black hairs straight up in the air, and did so at some of the hottest times of the day. They hypothesize this behavior may also help in heat regulation, though the mechanism is still unclear.

Gabor Horvath, a researcher at Eotvos Lorand University in Budapest who has studied zebra stripes, but was not involved in the Cobbs’ research, does not believe that thermoregulation is the primary function of zebra stripes.

“Such alleged convective air eddies could be formed exclusively above horizontal striped surfaces,” he said in an email. “If the main function of zebra stripes were cooling by these air eddies, then only the nearly horizontal areas of the back of zebras should be striped.”

Tim Caro, a wildlife biologist at the University of California, Davis who has also studied zebra stripes but was not involved in the Cobbs’ research, said that “it’s an interesting descriptive study” about the differences in temperature between black and white zebra stripes. However, he doesn’t think the article advances our understanding of the principal evolutionary drivers of these stripe patterns in the animals. His research and that of Horvath and others indicates the stripes could deter insects from landing.

“We’re absolutely sure that it’s about thwarting biting flies,” Caro said, adding that tsetse and horseflies that pester the zebras in Africa can carry deadly diseases like African horse sickness, equine influenza and a form of horse sleeping sickness called nagana. “They just cannot afford to let these biting flies land on their coats.”

At the same time, Caro still believes that the stripes have thermal consequences for zebras. He, Horvath and the Cobbs all agree that there likely isn’t one single reason zebras have evolved stripes.