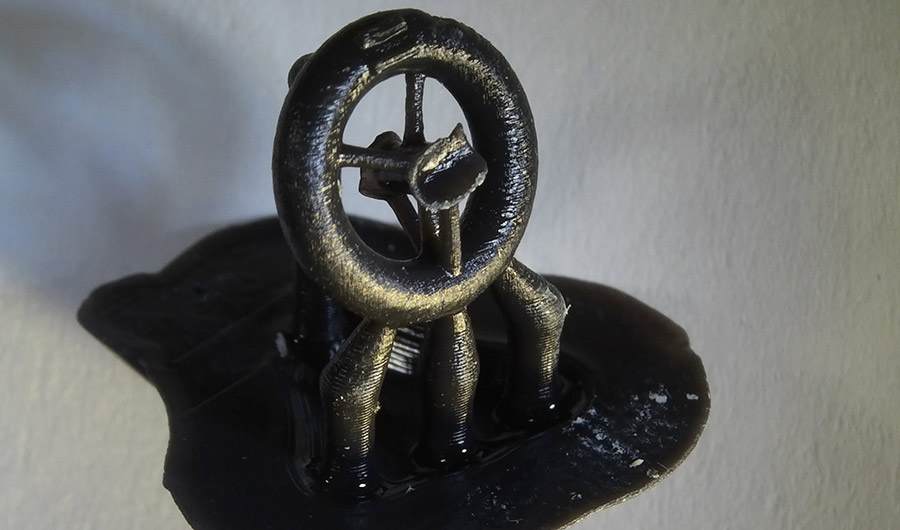 (Inside Science) -- Deep inside each ear, three bones the size of rice grains help conduct sounds from the ear drum. If one is cracked or damaged, surgeons can implant a substitute made of ceramic or metal. But unless they fit just right, those implants can shift, leading to more hearing loss. Now, researchers have proposed using 3-D printing to custom-fit middle ear bones for each person.

One problem with the current method of implanting ceramic and metal parts is that the implants shift during or after surgery. They can also become covered with scar tissue and stop conducting sound. The success rate in these surgeries is only about 55 to 75 percent.

Dr. Jeffrey D. Hirsch, assistant professor of radiology at the University of Maryland School of Medicine in Baltimore, was inspired by efforts to 3-D print other human prostheses, including limbs. He thought, Why not try it for the tiny ear bones?

Using CT scans, researchers got an accurate picture of the three inner ear bones -- called ossicles -- and they printed exact models to fit in the ears of cadavers. The three bones are connected like links of a chain, said Hirsch. “When any link gets disconnected, you get conductive hearing loss.”

The researchers took three cadavers and removed the middle link of the ossicles. They imaged the cadavers with a CT scan, and then from those images the researchers used a desktop 3-D printer to create a simple strut out of resin with an open cup on both ends to fit into the gap.

Hirsch asked four surgeons to match each implant to the cadaver it would fit in. “It was kind of like Goldilocks: one was too tight, one was too loose,” he said. All the surgeons correctly matched the implant to the body. “They said it was kind of a snap fit,” explained Hirsch. The study was presented at the annual meeting of the Radiological Society of North America and was originally published in the journal 3D Printing in Medicine.

The study was an important proof-of-concept, said Dr. Robert Jackler, a Stanford University surgeon and otologist-neurotologist who specializes in complex ear diseases. He pointed out that people have been 3-D printing middle ear bones to teach students how to practice surgery, but have not yet done so for patients.

One problem Hirsch and his colleagues haven’t addressed is that during surgery, the bone’s anatomy and relationships change, said Jackler. Because ear bone erosions often arise from infections, surgeons have to clean things out -- and that means that anatomy changes between a pre-operative CT scan and the operating room. One way to solve this may eventually include a scan and printer in the operating room to create custom-fitted ear bones in the middle of surgery.

In addition, the printed material has to be biocompatible; it can’t be too heavy, and it has to have the right vibratory characteristics, said Jackler. “If it’s too elastic and spongy or too heavy, it will diminish the vibrations. Likewise, if it’s too dense, the sound won’t travel,” he said.

Hirsch said there were limitations to his study -- the cadavers were cut-down pieces so the scans weren’t representative of a whole human head, and the researchers didn’t do any conduction tests to see how well the repair they proposed would transmit sound.

He’s excited by the future possibilities, including designing a perforated implant, impregnated with stem cells that could grow bone. “Theoretically if you implanted with impregnated stem cells, the body might create a permanent prosthesis with the patients’ own bone cells,” he said.

Hirsch sees the printed ear bones as part of a larger trend. "3-D printing is creating a revolution in prosthetics,” he said. “In the future, anytime anyone gets an implant, it’s going to be a custom, personal replacement based on imaging data.”

Researchers Study Violinists To Learn How Humans Act in Synchrony
Alligators May Be Able to Survive Venomous Snake Bites
New Theory Says We’ve Been Wrong About How Bubbles Pop
Crustacean Genes May Solve Debate Over How Insects Evolved to Fly
Some Beetles Survive Being Eaten, New Study Finds
END_OF_DOCUMENT_TOKEN_TO_BE_REPLACED

COVID-19 Vaccine, Sharks and Mezcal
Crabs Use Belly Sounds To Communicate
Touring The Trinity Test Site
Protests, A Retracted Paper, and a Super-Earth Planet
Why Is an Empty Shampoo Bottle So Easy To Knock Over?
END_OF_DOCUMENT_TOKEN_TO_BE_REPLACED